Romancing Your Dark Side & Giveaway 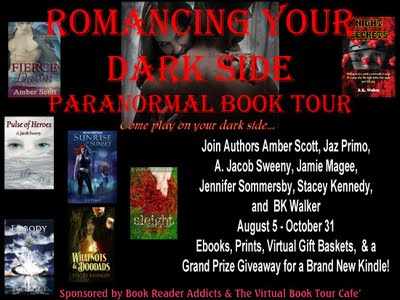 Welcome to Romancing Your Dark Side Paranormal Book Tour, brought to you by Book Reader Addicts and The VBT Cafe'. Today I'm spotlighting 3 of the 7 authors on tour, you can meet them today, learn about their books, and leave a comment to be entered to win a copy of their books. This tour is going to be an awesome tour with a grand prize giveaway for a brand new Kindle and Virtual Gift Basket. Follow the tour over the next 3 months and for every comment you leave you gain an entry for that Kindle, not to mention to be entered for the giveaway that day with that host. You can view the full schedule for each author at The Virtual Book Tour Cafe' Blog.

Come back tomorrow to meet the other three authors and enter to win their books too :). 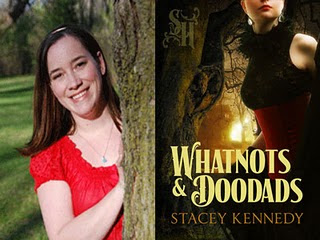 
For Bryanna, a witch from the Asheville Coven, magic is on the fritz. Shunned by her coven and her boyfriend Layton for her unruly magic, she seeks a new life for herself. It just so happens, fate steps in and brings her to Strange Hollow--a place where being different is not only acceptable, but encouraged.

When Bryanna arrives in Strange Hollow, Zeke, a demon gone good, is burning with Hell’s fire over her. Not only has she set his world ablaze, but he’s found one soul he can save. He’s determined to free her from the insecurities that have damaged her soul.

Together they experience lava-hot passion as they weave their way through a tornado of emotions. But when Layton returns for her, will Zeke’s attempts to break the unworthy cage woven around her be enough to keep her in Strange Hollow forever? 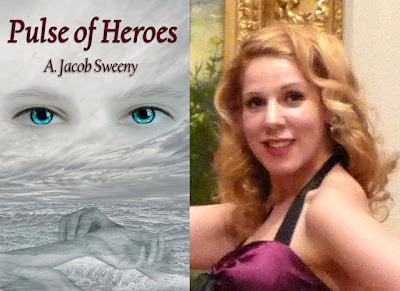 A. Jacob Sweeny holds a degree in History with an emphasis on Ancient Near East. Her immersion in world myths and her archaeological fieldwork provided the initial spark that led to the development of Pulse Of Heroes. Besides writing, A. Jacob Sweeny is a strong advocate for the protection of women and children worldwide. She enjoys cooking spicy food and regularly suffers from bouts of creative insomnia.
Pulse Of Heroes Blurb:


Pulse of Heroes weaves together elements from several different genres: romance, suspense, myth/fantasy, paranormal, history and at its core, a heroine’s journey and transformation. A. Jacob Sweeny has crafted a true and sensitive coming-of-age narrative of a quirky teenage girl protagonist becoming a confident young woman with her own voice. At the same time, she draws the reader into a gripping adventure filled with fantastic historical elements and the crushing intensity of first love. Pulse of Heroes is a YA/crossover novel with memorable characters and several story arcs. It has a multi-cultural perspective with characters from around the globe, and a prominent female point-of-view. "A very dark fairy tale…"
Michelle used to feel like she was behind in everything, especially relationships. Her great aunt says she is like a bland meal, "no salt or pepper". But in junior year, everything changes. Her father takes a position on the Town Council, a popular boy in school is interested in her, and most importantly, the Hekademos Learning Center, a private school for 'troubled' students, moves into her quiet neighborhood amidst the protests of the entire town.
Upon seeing the School Regent out with a group of young guys just before Christmas, Michelle is convinced that there is something odd about them. Her curiosity gets the better of her and she embarks upon a mission to figure out what is really going on. After an embarrassing fall over the school wall, Michelle meets Elliot and her ordinary ‘bland’ life changes its course forever.
Elliot is no ordinary human. No one at the Hekademos Learning Center is. Beautiful and fierce, they have survived throughout the millennia by weaving in and out of human events. Although Elliot carries numerous painful memories from his many pasts, he disregards his own better judgment and the advice of his friends, and finds himself falling for Michelle‘s offbeat personality.
At Elliot's side, Michelle must learn to deal with the bundle of contradictory emotions called love, But when History catches up with them, the difference between their life paths threatens to destroy any future that they might have had together. Ultimately, Michelle will have to trust her intuition in order to face the danger and uncertainty of being drawn into Elliot's wondrous world. 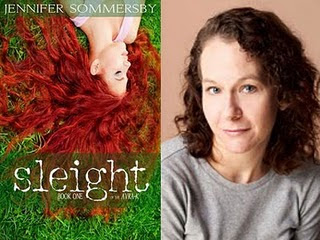 Jennifer Sommersby, writer and copy editor, is an American ex-pat who lives in the Great White North (western Canada) with her family. She was a member of the 2007 fiction cohort of Simon Fraser University's The Writer's Studio. Her first novel, a YA paranormal/urban fantasy, is called Sleight: Book One of the AVRA-K, and was released in March 2011.

Her mom is dead.
Ghosts follow her around.
Her best friend is an elephant.
And she’s about to meet the biggest game changer of all: a boy. With a secret.

When circus-dwelling Gemma Flannery learns she will be attending public school for the first time in her seventeen years, little does she know that fitting in with her 12th-grade classmates will be the least of her concerns. A pro at hiding her knack for seeing the dead (“shades”), Gemma is grieving the recent suicide of her mentally ill mother, a process eased by the introduction of her first real love interest, the charming and painfully handsome Henry Dmitri, who is harboring his own collection of dangerous secrets. Together, they will be presented with a frightening challenge: to assume their roles as heirs to a 3000-year-old magical text, the AVRAKEDAVRA, a book the über-rich, sleight-of-being master Lucian Dmitri would do anything to get his hands on. As each terrifying layer in her new reality melts away, Gemma unearths truths that her quiet, nomadic life with the Cinzio Traveling Players is not at all what she’d always cherished. Gemma and Henry must rely on each other to stop Lucian’s diabolical plotting that will bring the world to its tired, scab-riddled knees, and are sent on the flight of their young lives, to save themselves, their families, and the world from the darkest kind of destruction.


Don't forget to leave your email address in case you win.


Want to gain extra entries for today's drawing? Leave a separate comment for each of the following you did.

Thanks for stopping in and catch you on the flip side. Don't forget, tomorrow you will meet the other 3 authors touring with me and will have a chance to win their books too. So stop back in tomorrow. 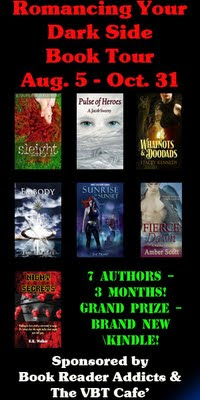 where do you go to enter the contests for the featured authors?? The three authors for the 6th aren't listed anywhere.

Gosh dang it all. So many new authors, so many new books! Thanks for the reviews. On to tour some more blog!

All of these sound good, but Pulse of Heroes is more up my alley. I checked them out on amazon, and they all have some really good reviews. Plus they are all priced reasonable! Put some in my wish list, will def be checking them out. Thanks!!

These are some great looking books.

Theresa, this is where you enter and you can also enter at www.vbtcafe.com. Thanks for stopping in all :).

They sound great! I'd love to have all three.
therealbellacullen@yahoo.com

I love the sound of all 3 books! Thanks for bringing them to my attention:)
jwitt33 at live dot com

Like Immortality & Beyond on FB: Julie Witt
jwitt33 at live dot com

Can't wait to follow these great authors throughout the blog tour!! I think this one is gonna be fun!!
Theresa
rtnorman2@gmail.com

Amber Scott-
I can't wait to read Fierce Dawn!! I already have it on my wish list, (the one list that is super very long....but I put yours at the top).
Thanks for doing this tour for us fans!
Theresa
rtnorman2@gmail.com

Jaz Primo-
What can I say but YEA!!! A NEW AUTHOR TO FOLLOW!! (no, not "stalk", just follow on the tour! ha! ha!) My son thinks your the best one because you fish! I can't wait to read Sunrise at Sunset, it looks really good. Thanks for doing the tour.
Theresa
rtnorman2@gmail.com

The tour schedule says Jamie Magee is on this blog today, the 7th. I can't wait to read her book, Embody. Wish I knew what my "special gift" is, like the book mentions!
Theresa
rtnorman2@gmail.com

Stacey Kennedy-
Your book, "Whatnots & Doodads, sounds really interesting. I love a good story about witches and magic! Can't wait to read this one and find out how you came up with the title for it! 8)
Thanks for doing the tour!
Theresa
rtnorman2@gmail.com

A. Jacob Sweeney-
(what a cool name to say! ha! ha!)
Pulse of Hero's sounds so good. I love to read about the past and learn about archaeological fieldwork. I can't wait to read this one. (it sounds like I say that alot, but all of you authors are coming up with some really good stuff!)

Jennifer Sommersby-
I just think that the whole storyline of people who can see ghosts, is such a great place to start writing a super book!
Can't wait to read about Gemma!
Theresa
rtnorman2@gmail.com

Just wanted to say quick, that B.K. Walker and Cynthia Garcia did an awsome job of setting this tour up! I'm used to the week long tours but I think this 3 month long one will turn out great and be lots of fun!!

Thanks for the great giveaway!
twigerina[at]hotmail[dot]com

Thanks for the giveaway!
I'm a follower on GFC-Lisa Richards

Sorry I didn't get to stalk you last night :) Still recovering from the opeing party!! Whooohoo! All you chicas rock!!
viajeradelmar@aol.com

I need a tour schedule! Can someone send it to me Plllllleeeaassseee?

Wanted to say thank you to everyone that joined in on all this fun!!! Pulse Of Heroes is the first of a trilogy and book II will be released in October! Also write a review for Pulse of Heroes on Goodreads before August 15 and enter to win a free 'signed' copy of the second installment! happy reading everyone!!!

All of these books look really interesting.

I am a GFC follower
melorabrock {at} gmail {dot} com

Whatnots and Doodads, what an awesome title. Sounds like a great book too.