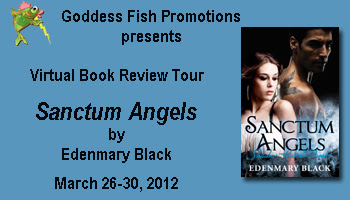 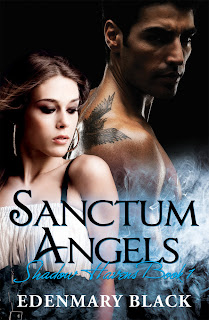 When Priana Grey walks into a bank, she isn’t expecting to be taken hostage by a violent thief; nor, is she expecting Detective Joe Cafaris to offer his life for hers. The stepdaughter of fallen angels of the Sanctum, she has concealed her true nature to move among humans for years, but Joe’s courage astounds her. Although she knows that falling in love with a human is a disaster, she just can’t ignore what she feels.
Joe is a tough loner, cool in the most dangerous situations, but he’s not ready for the scorching desire he feels for Priana. He has a million logical reasons to walk away, but his heart wants something else.
Priana’s stepbrother, Keirc, warns that she’ll find only misery with Joe, yet he guards a perilous secret of his own. His lover, Iridea, is the daughter of Sebastien Galaurus, a ruthless vampire who leads the Demesne, a powerful supernatural haven quite unlike the Sanctum.
When a stunning crisis forces Priana into the heart of the Demesne, a maelstrom explodes in the shadow of supernatural havens on the brink of war, where fallen angels, vampires, weres and daemons call the shots and humans are viewed as critically frail - a place where men and supernaturals can die.
Review:
Sanctum Angels starts off with a bang! From the first sentence in the prologue to the end of the first chapter, I couldn't put this book down. What a way to start a book! I was hooked.
What originality, and I have to say, I've come across some great vampire/shifter novels, but never vampire/angels or vampire/daemons. I loved everything about this book. The whole daemon/vamp and angel/vamp thing was so intriguing that I couldn't wait to learn more in this wonderful world Black created.
Black did a magnificent job laying out a very enticing plot, drawing you in and keeping you wanting to turn the pages to find out what happens next. Just beautiful!
I would highly recommend Sanctum Angels for a different spin on the Supernatural Universe, a beautiful love story, and just a plain old good new Indie Author to test drive.
Kudos! I can't wait for the next book, Sanctum Warriors!

Excerpt:
Pria heard a sharp intake of breath next to her that alarmed her more than removing her red dress, which was little more than a long tee shirt. She whipped the dress over her head and kicked her flip flops to the center of the floor. Down to her slip, she glanced at the girl, who was sliding a pair of cut offs down thin, tan legs. She wore a simple pink top with buttons and white cotton panties. Her fingers fluttered over the shirt’s buttons, unable to make herself undo them.
“Honey…” Pria whispered.
“I’m not wearing a bra,” the girl hissed, in a panicky voice.
“It’ll be okay. Keep the shirt on. Just don’t say a word, no matter what.”
In a moment, the thief’s eye came to rest on the girl, as the other hostages continued disrobing. He strode forward until he was inches of her face.
“Get your shirt off, bitch!” he screamed.
The girls squeezed her eyes closed as if to protect herself from his fury. She turned her head away, expecting to be hit.
Pria noted the thief’s hot breath and dirty, blond hair. His pale skin was specked with acne scarring. Spittle gathered at the corners of his thin lips.
Pria’s hand flew upward in front of the man’s face. “She won’t run,” she said firmly. “That’s why you want us to take our shoes and clothes off…so we won’t run for the door. She won’t run.”
The gunman looked down at Pria, as if aware of her for the first time.
www.edenmaryblack.com

Ednemary Black is currently touring with Goddess Fish Promotions. You can view her tour HERE. She will also be giving away a $25 Amazon Gift Card to one randomly drawn commenter for her tour. 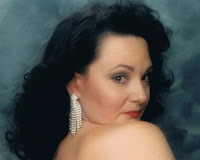 Edenmary Black has been writing since she could clutch a pencil. She has always been fascinated with the mysteries of the paranormal and loves the question all writers answer when they pen fiction. For her, it's all about that magical, "What if?” When not working her keyboard, she enjoys long walks with her golden retriever, reading and spending time with her family, all of whom are male. She spends far too much on lingerie and is very, very weak for chocolate. Visit her at www.edenmaryblack.com. 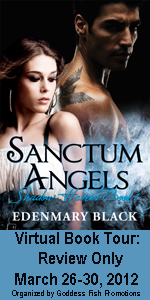 I must read SANCTUM ANGELS. The excerpt needed to be quite a few chapters longer thank you.

Thank you for hosting Edenmary today.

Thank you for having me on the site today, BK! I'm so happy you enjoyed SANCTUM ANGELS! Loved reading your review! I'll stop by later to chat with visitors. Bye for now!
Edenmary

Hi Marybelle - Nice to see you here! Head for my website (www.edenmaryblack.com) and click 'Excerpt' and you can read the Prologue and Chapter One. Happy reading!
Edenmary

What an excellent review. I love how the reviewer referred to the book's originality. Sounds like it's not just another familiar-feeling paranormal book. I must get over to your website today, Edenmary, to read the Prologue and Chapter 1.

Hi Catherine Lee - Hope you have a few moments to do that! Good to see you here too. Happy reading!
Edenmary

Thanks for stopping by, Vivien! I liked it too!
Edenmary

You must be thrilled to get such a wonderful review. I love reading these reviews. It gives me an idea of books I really want to read, and this is one of them.

Ooh...nice review. I'm following along on the hop. That review has me even more eager to read this book. Thanks for posting and sharing your thoughts on this book. I'm going to add it to my TBR list =)
Tanyaw1224(at)yahoo(dot)com

Thanks for adding SANCTUM ANGELS: SHADOW HAVENS BOOK 1 to your TBR list, Tanyaw1224! Glad you're along on the tour.
Edenmary

Great review. And what a fantastic excerpt! Can't wait to read this one!! Thanks for sharing your find!

Nice to meet you here, Paige. Glad you liked the excerpt!
Edenmary

What a great excerpt sounds like such a good book! I can't wait to read it!
tishajean@ charter.net

I so love the title for the second book. I know I'm going to get that one too. Congrats Edenmary on this series. Thanks for the chance to win.
luvfuzzzeeefaces at yahoo dot com

Thanks, Latishajean! Have fun with it!
Edenmary

Good luck Julianne! Sanctum Warriors: Shadow Havens Book 2 is not out yet, but it's coming!

How many books do you expect for this series, Edenmary?

Just popping in to say HI and sorry I missed visiting with you on party day!