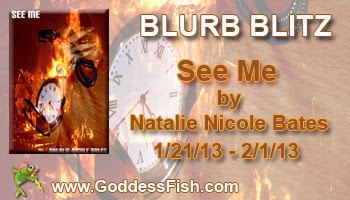 See Me
by Natalie Nicole Bates 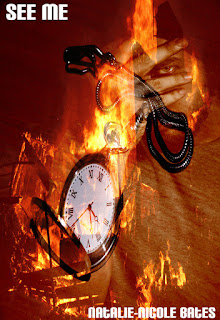 Carly Anders is hearing voices in her head. Another one of her kind is trying to contact her. She knows of the malevolent freaks—others who are eternal like her and seek out the weak to inflict pain upon. For years, Carly has held up huge protective walls to keep herself and her secrets safe. Now, physically and mentally exhausted, Carly needs protection and rest.

She accepts the invitation to visit an internet friend who needs help appraising a collection of antique photographs. The situation is not ideal, but Carly hopes a male presence in her life will deter the determined suitor who haunts her thoughts and dreams.

Daniel Tremont is not what Carly is expecting.

The former funeral director has a secret of his own. Not only is he eternal like Carly, he is her creation from all those years before—her abomination she thought she killed.

Daniel has been searching for Carly for years. He knows she is the piece of his life that he has been missing for so long. Now that he has found her, he has no intentions of letting her go.

Often she thought about herself, what she had become in life after her drowning when she was only four.

A mutant. An abomination. A freak.

She knew there were others like her out there in the world as well. Xander, for example. Even Embree, but Embree was dormant. Carly’s senses told her that Embree was alive, but she was alone and in a very dark place.

Just the thought of what might have become of Embree caused a chill to rise on her skin and she shuddered. Would that happen to her someday, too?

Maybe Daniel was ‘something else’, as well.

Sometimes she would be walking down the street and her eyes would connect with a perfect stranger, and she knew by instinct alone they were different. She knew, and they knew, too. But neither spoke a word. It was in the eyes. Whether they were like her, she was unsure.

And Daniel had those eyes as well. Eyes that had the ability to draw her in if she allowed him. Eyes that were an unusual, ethereal pale blue.

But she didn’t fear him. Although mentally tired, she was physically strong when threatened. That was Xander’s gift to her. Just one encounter with him and she was suddenly able to leap higher, run faster than ever before. If confronted, she was certain she could outmatch her opponent. Knowing her abilities gave her the confidence that helped her cope alone all of these years.

Maybe it was a mistake being here. It wasn’t too late to leave a note of goodbye and leave.

Natalie-Nicole Bates is a book reviewer and author.

Her passions in life include books and hockey along with Victorian and Edwardian era photography and antique poison bottles. Natalie contributes her uncharacteristic love of hockey to being born in Russia.

She currently resides in the UK where she is working on her next book and adding to her collection of 19th century post-mortem photos.

Buy link for SEE ME:

Natalie be awarding a $25 Amazon gift card to a randomly drawn commenter during the tour. 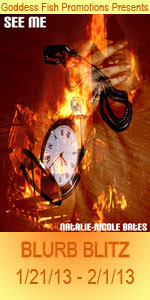 Is this more of a fun and light book or has it darker elements?

SEE ME is going to be a very interesting read. Quite a unique experience, which bodes well.

Thank you so much for hosting SEE ME here at your amazing site!

Hi Lyra~First and foremost, SEE ME is a love story. It has a few darker moments, but no, not meant to be fun and lively.

I kept the focus on Daniel and Carly, and with the exception of a few brief interactions, there are no secondary characters.

I guess i will have to read this story to find out more about Daniel.

Hi Natalie,
do you see Daniel as a good character or does he has a darker side?

Gala~No, Daniel doesn't have a dark side. If anything he is eccentric, but he's actually quite lovely.

Emiliana~ For a better insight into Carly and what actually happened with Daniel, Leap of Faith offers the prologue to the story at:

Thanks for sharing the link, I'll have to read that one!

Sorry for the late post. I’m playing catch-up here so I’m just popping in to say HI and sorry I missed visiting with you on party day! Hope you all had a good time!