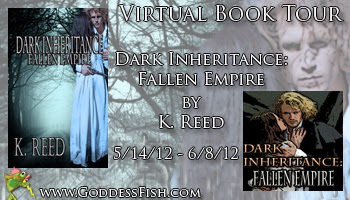 
Thank you for having me, I think I’ll have a…vampire’s wine. Yes, that sounds perfect! 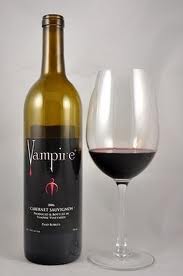 
BK:  Please tell us a little bit about your current release...
Hello and thanks for inviting me in. Let me just try this wine…delicious! I’ll have more please. Just keep the bottle here. :)


My current release isn’t one a traditional publisher would take. None of them wanted to take the risk on such a left of center story such as a dystopian Regency romance. After all, how would they market such a thing? Where would they shelve it?


I hope you’ll enjoy my latest release. Dark Inheritance: Fallen Empire is an alternate history Regency romance. A plague has wiped out most of the population in England and the government has fallen. What’s a well-connected woman to do when suddenly rescued by a handsome Baron? Better yet, what’s said handsome Baron to do when he realizes he can’t let this woman die as so many others have?


BK:  What inspired this particular novel/book?
Too much History Channel. Too much pizza. Too much wine. Dangerous combination! Seriously, though, the History Channel is wicked when they have those Life After or are-you-ready-for marathons. Being a history lover, it all came together in its (sort of) natural conclusion!


BK:  When did you first realize you wanted to be a writer?
I’m one of those writers who will tell you always. I can’t help it, it’s true! Feel free to skip to the next question! But I’ve pursued it seriously several years ago after being encouraged by a good friend.


BK:  What was the hardest thing about writing this story?
Because it’s so different from other Regencies, most other historicals actually, I had no guideline for success. That and keeping the locations straight. I’ve never actually been to Essex County, England! However those internet maps are fantastic for this type of research.


BK:  What character was your favorite to write for in this story? Why?
I’ve talked about my main characters so I want to mention an obscure character here. Lieutenant Commander Sean Roderick—he’s mentioned only briefly in this story but there’s enough of a hint of his story to know how the world has crumbled, how civilization in England has disintegrated. I have high hopes for his story!


As for my main characters, it’s a tossup. I love both the hero and heroine equally, both Grayson and Juliette bring different things to the romance table.


BK:  Which was your favorite scene to write?
The big confrontation scene between Juliette and Grayson. High emotional content, bit of action, this scene had it all. It was difficult, I can’t tell you how many times I went over that one, but in the end very rewarding!


BK:  Will this become a series? If so, what inspired it to be a series?
Yes, it will be a series. It’s a really cool world and I didn't want to let it go immediately. Plus there is a lot of story to tell on the way back to ‘normalcy’ in the Fallen Empire verse.


BK:  Now for a little fun, and into your everyday life. What is a day in your life like?
Busy mixed with work, writing, family, dog…there are never enough hours in the day! I know everyone would agree with me, there just never are.


BK:  What do you like to do when you're not writing?
Travel. In the last few years I’ve discovered the beauty of long weekend trips. And the train. Amtrak is the best travel invention ever! If I didn’t have to fly to certain parts of the world, I never would. But the train doesn’t do oceans. Pity. In the last 18 months I’ve been to Washington, D.C, Williamsburg, Florida, the Pocono Mountains, upstate New York. I also enjoy antiquing and hiking.


BK:  What is one thing your readers would be most surprised to learn about you?
I’m writing a cookbook! And I actually do know how to cook. I even like it. It’s Edwardian in nature, cooking coupled with entertaining, no doubt because of the popularity of such shows as Downton Abbey. A publisher asked me to do this project, and I immediately jumped on it.


This is just a glimpse of what each meal was like then, since most meals consisted of a great many courses. Added into that will be what a contemporary person could reasonably do to give an Edwardian flair to a dinner party or afternoon tea.


BK:  What do you like to read? Who is your favorite author?
I get asked this a lot, but I’m not sure I have one. Given what I like to write, I’m going to say Jane Austen and Agatha Christie. Sure, some might say Dame Agatha stories are cliché, but they don’t realize she invented the cliché.


BK:  Please tell us one piece of advice you were given as an author that you carry with you when you write?
Finish the damn book. Best advice ever!


BK:  What is one piece of advice you can give to aspiring writers/authors?
Don’t take rejection personally.


BK:  What are you currently working on?
A number of things! The cookbook I mentioned, the second in the Fallen Empire series, but right now I’m plot-deep in a Victorian romantic suspense trilogy.


BK:  Where can readers connect with you?
Always feel free to kreedauthor@yahoo.com, I’m on  https://twitter.com/#!/KReedauthor, and I http://kreedauthor.wordpress.com (infrequently). I also have a  http://www.kreedauthor.com with all this information and more. 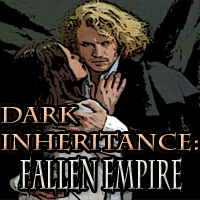 Too many post-apocalyptic stories, movies, and what-ifs crowded her head, and K Reed decided to do something about it. So she plotted one out, decided an historical post-apocalyptic romance was the way to go, and wrote that one instead.

A lover of all things historical, of strong heroes with equally strong heroines, and of sexy pirates, she’s going to explore the post-apocalyptic world of plague-ridden 1804 and the gritty criminal element of Victorian England.

Luckily she has an understanding family, supportive friends, and a day job that offers her the flexibility she needs to plot, plan, and write. Sure, one day she’d like to travel the country in search of fantastic storylines and great locale pictures, but for now she’ll stick to the east coast and the internet. 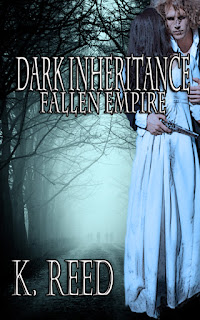 The once glittering ballrooms of Regency England now lay desolate. A plague has ravaged the countryside. The government has fallen. What vestiges of order remained have been consumed by the endless funeral pyres.


Grayson, once the Baron of Harwich, sought only to protect his people. Rescuing a half-dead woman was not among his plans. But something about her pulled at him. Perhaps it was her beauty, still evident beneath the pallor of loss. Perhaps it was the recently fired rifle at her side. Or maybe he was simply tried of death. All he knew was that the plague had taken too much already. He couldn’t let it take her as well.

Lady Juliette Adair had been ready to die with her brother. She didn't expect to be shown mercy in a world that had no room for mercy. When Grayson saved her she questioned his motives but soon found herself intrigued by him, drawn to him.
Societal rules were a thing of the past, dead along with the ton. Juliette had no manner by which to measure her growing closeness to Grayson any longer. But when she discovers he may not be the man she thought she knew more is at stake than just her heart. The secrets she carries could make a king or destroy one.

He didn’t know what made him look, what sound captured his attention, but he suddenly knew he was not alone. Cursing his carelessness, he drew his sword and looked around. There, on the opposite side of the bed, pushed against the wall.

She lay on a settee, head resting on one arm, dark hair falling down the side of the sofa. He glanced to the bed, to the man there, and wondered who the dead pair were. She looked to have survived the plague; her face and neck were thin and smooth. Died of neglect, then. The last living being in the house and she couldn’t summon the strength to feed herself.

His eyes locked on the rifle lying just under her reach. Sheathing his sword, it was then he noticed that powder marks blackened her hands and were smudged along her face and neck. He quickly scanned the area, a small bag of powder and a case of shot rested on a nearby chair.

Cautiously walking closer, Grayson crouched before the prone figure and surprised himself by reaching out to touch her. He stopped just short of her cheek, curling his fingers into a fist. He took a brief moment to admire her beauty.
Even in death, she captivated.

Standing, he picked up the rifle and backed away, turning to search the rest of the room before he’d take the powder and shot.

That was when he heard her moan.

K. Reed will award nine Post-apocalypse survival baskets (which include tea, a fan, a shawl, a bracelet and more -- Plus ONE Grand Prize basket will include an iPod Touch) to randomly drawn commenters during the tour and one to the host with the most comments (excluding hers and the host's) - US/Canada only.

Follow the tour HERE for more chances to win! 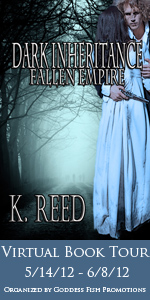 LOVE the concept behind your book! It's on my TBR -- gotta check if it's at BN or Smashwords as I have a Nook.

Good luck with it!

Thank you for hosting the author today.

Thanks for stopping by, I hope you enjoy Dark Inheritance--it really is different.

And thanks for having me today. I'll answer any questions your readers have, so feel free to ask away!

The more I see of this book I know I would love it!! and thanks for the amazing giveaway!

Congrats on the book! Thanks for sharing more about the book and characters.

Hey BK!!!! I havent stopped by in a while and I like the new design!!!

So I have a few questions. Is your Lieutenant Commander Sean Roderick going to be a main character in one of your future works? And your cookbook...What is the best dessert (and I want your super naughty gooey sin on a stick)you have come up with? I have a severe weakness for sweets and I love Austen too. What was your favorite book by her? This tour is fun!

Thanks for stopping by Shauna and BN.

This book sounds so good. I can't wait to read it!! Do you plan on making your Sean a main character?

Great interview~! I can't wait to read the book!!

Love the book cover and thanks for the chance to win!
Yvette
yratpatrol@aol.com

Nice interview. The book sounds interesting! Thanks for offering the give away!!