Welcome back to Immortality and Beyond AmBear. Now that we’re settled in, let’s chat. Shall we?

AS: On a dark and stormy night, :) Just kidding. It started with the idea for The Pedalstem Lillie Series. Chaos Unleashed was my first published works.

AS: Heavy Metal Heartbeat is book 2 in the Rock n Roll Paraphantasy Series. The series came to be due to my love of music and need to write a different kind of Vampire/Paranormal Story.

AS: Well, I would love to say I stand my ground, But no! My characters have free reign as for the story. I have an idea, but by the end its usually not where I started.

AS: That is a very difficult task indeed. I rely heavily on my creativity. I want not only my stories to be different but my Characters too. People will love them, they need to be as individual as you and I. Same character different name is kinda boring.
BK: Which character was your favorite to write for in this story? Why?

AS: Ozzie! He has become quite the Fan Fav too. He is sarcastic, funny and of course swoon worthy hott! He is definitely Alpha male material! As a hunter he is in control and takes no crap! Absolute Bad boy!

BK: Tell us about one scene you had the most fun writing…

AS: The scenes where Ozzie is in the 'In-Between' It is a total mind blow for him and the reader. I do ask ”Are you ready for the madness?” There is a reason for it.

AS: I would have to say...Sebastian. If I had to compare him to anyone, he is most like Ian Somerhalder with that winning crooked grin that is so damn sexy. The one thing that would be a must have on the island is a Magic wand, that way I could always have what I wanted, food, shelter, water, even if I had to magic it up :) In the world of magic anything is possible!

AS: My office, hmm...it is quite a few places: in the living room scattered across the small coffee table, on my desk that sits in the office/spare room, again more paperwork littered about like confetti and in my purse, in the form of a notebook filled with chicken scratch that takes me hours to get through because I cant read my own handwriting.

AS: You mean time to myself...What is that? :) Usually I am either Tanning, getting my hair done and getting the latest gossip at the hair salon, or running around with the hubby. We do hate to be indoors so much! Oh, and let's not forget keeping up with Game of Thrones! OMG, I love this show!

AS: I'm not sure...Probably that unlike regular girls I LOVE classic muscle cars and car shows! Holy Sheep, my dream car is a 1969 Shelby GT 500 and my next drool worthy car is a 2013 black on black Dodge Challenger, yes, with a Hemi! For anyone who doesn't speak car~ Its awesome! In Heavy Metal Heartbeat, Ozzie drives one! Fav character-fav Car...coincidence? Most definitely!

AS: I would have to say, a scene that would make 50 shades blush and no it has not reached public eyes! * blushes *

AS: Never give up on this dream. It is meant to be hard so you will appreciate all that comes with it. If it were easy, everyone would be famous!

AS: Well, closer to the end of this year, Stars of Fire will be released. It is book 3 in The Pedalstem Lillie Series published by Devine Destinies. There are also many WIP saved on PC at the moment. There is a sassy YA, Social Butterflies, An adventure story, which doesn't have a title yet and a Western Romance, Boots and Boys plus the other books in my current series'. So I plan to be around a good long time bringing to life many more plots and adventures.

AS: All over the place~

BK: Using your name as an acronym, please describe your book... 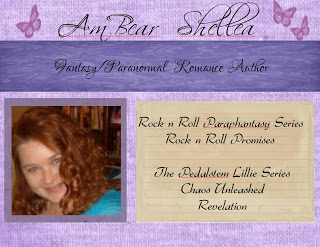 BIO:
Although I have always enjoyed writing, the dream to become a writer came when I read A Midsummer Night’s Dream by William Shakespeare, in the sixth grade. My early works, not published, were in the form of children’s stories I would read to my two daughters. I divide my days between the real world and the ones I’ve created. My life and my characters keep me very busy in my Mid-Western scene, where I live with my husband, and my children (both human and furry). 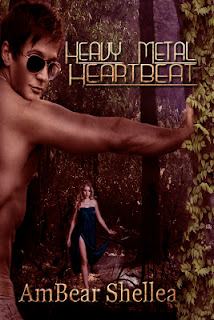 Heavy Metal Heartbeat is one wild ride. Its twists, turns and mind games will leave you breathless and borderline crazy.

This rockin' adventure begins with Ozzie, who has awakened from a harsh brush with death. Just as he thought he overcame all the dangers of his supernatural survival, danger strikes with a vengeance. The news of the kidnapping of a loved one ignites his rage, unlocking a family secret and changing who he is forever.

Now he's in a rush to play hero and savior. There's only problem; What happens if the savior becomes a villain?

Ozzie's friends, with the help of his father, put him to the test to see if he can indeed be the hero that saves the day or the hindrance that gets them all killed. While visiting the in-between he is given the knowledge to overcome his situation. All he must do is embrace who he is. Who is that, exactly?

Turns out when you take a human man with an ancient bloodline, add in slash marks from a Wolf, a bite from a Vampire, the pure love from the woman he loves and piss him off, you get a man no one expected!

He felt his father’s touch on his chest.

“...You are, among us, are a fallen soldier. It is proof that you have been touched by the supernatural and come out the other side…but at what cost? At what cost, my son?”

His father fell back onto the couch and hung his head. Tears fell down his father's face as he wept. Ozzie's heart shattered like glass.
“Father, I am right here. I am alive. I’m not a fallen solider. You felt my heart beat in my chest and blood surge through my veins. I don’t understand. Why are you crying as if I have died?”

His father’s dark brown eyes stared back at him.
“Because you have, Son. This, you here, this is not my son. This is the work of supernatural witches. The tattoo is proof you are dead. It’s just a matter of time before we find out what dead you shall run with.”

For the first time in his life, his father looked at him as if he were something to pity. His chest felt as if knives made of fire and ice plunged into him to the hilt. He stumbled backward, his hand over his heart. His breath wouldn’t pass his lips and tears of anger rimmed his eyes. What used to be his heart lay in pieces somewhere on the floor. He watched his father move from the couch and head for the door.

a Rafflecopter giveaway
Posted by Nightly Cafe at 12:16 AM

Thanks so much for chatting AmBear :)

" I would have to say, a scene that would make 50 shades blush and no it has not reached public eyes!"

LOL! You have my attention now! I hope you are having a great tour!

Funny how those characters take over and run the show :)

I am a huge fan of music and books so this sounds like a great premise! I wish you well on your tour:O)

Good luck with your tour! And don't worry! My "office" is like yours!