The Outside by Laura Bickle - Bewitching Book Tour 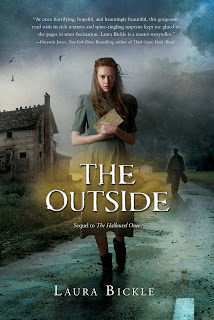 The Outside
The Hallowed Ones Book Two
Laura Bickle

One girl. One road. One chance to save what remains…

After a plague of vampires is unleashed in the world, Katie is kicked out of her Amish community for her refusal to adhere to the new rules of survival. Now in exile, she enters an outside world of unspeakable violence with only her two “English” friends and a horse by her side. Together they seek answers and other survivors—but each sunset brings the threat of vampire attack, and each sunrise the threat of starvation.

And yet through this darkness come the shining ones: luminescent men and women with the power to deflect vampires and survive the night. But can these new people be trusted, and are they even people at all?

In this edge-of-your-seat thriller, it’s up to one Amish girl to save her family, her community, and the boy she loves . . . but what will she be asked to leave behind in return?

Advance Praise for The Outside:

“Top-notch. . . . A horror story with heart and soul.”
—Kirkus, starred review
“At once horrifying, hopeful, and hauntingly beautiful, this gorgeous read with its rich textures and spine-tingling suspense kept me glued to the pages in utter fascination. Laura Bickle is a master storyteller.”

Praise for The Hallowed Ones

"This is a book to make you fear the shadows--a horrifying and gruesome tale of faith, and things that blink red eyes in the night. I began reading in the daylight, and read on into the late hours, leaning close, biting my lip. I could not look away; I was obsessed. Katie is an unbreakable soul."
—Lauren DeStefano, New York Times Bestselling author of the Chemical Garden Trilogy

"Tight pacing, suspenseful scenes, Wow! moments of tension, and exposure into a world I knew little about, The Hallowed Ones is an exciting, terse read. . . . Laura Bickle's debut novel for young adults has quickly become my favorite dystopian novel of 2012. . . . It left me wanting more, so much more."
—readergirlsblog.com

"Readers will find it hard to put down this suspenseful, scary, compulsively readable adventure."
—Kirkus Reviews

"Katie's an original character, and her thoughtful rebellion makes her an interesting addition to supernatural fictions's gallery of strong heroines."
—Bulletin 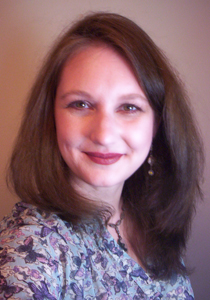 Laura Bickle’s professional background is in criminal justice and library science, and when she’s not patrolling the stacks at the public library she’s dreaming up stories about the monsters under the stairs (she also writes contemporary fantasy novels under the name Alayna Williams).

Laura lives in Ohio with her husband and six mostly-reformed feral cats. 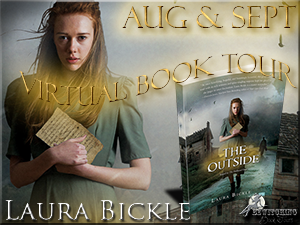 I can't wait to read this. LOVED The Hollowed Ones

Thanks so much, Nightly Cafe! I'm thrilled that you enjoyed it! :-D

Thanks very much for hosting me today!

I love the cover!!

Thanks, Teddy! The artist is Shane Rebenschied, and more of his awesome work is here: http://blot.com/