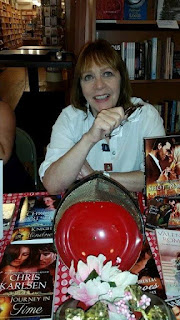 Chris Karlsen is a Chicago native. Her family moved to Los Angeles when she was in her late teens where she later studied at UCLA. She graduated with a Business Degree. The daughter of a history professor and a mother who was a voracious reader, she grew up with a love of history and books.

Her parents were also passionate about traveling and passed their passion onto Chris. Once bitten with the travel bug, Chris spent most of her adult life visiting the places she'd read about and that fascinated her. Her travels have taken her Europe, the Near East, and North Africa, in addition to most of the United States. She most frequently visited England and France, where several of her books are set.

After college, Chris spent the next twenty-five years in law enforcement with two agencies. Harboring a strong desire to write since her teens, upon retiring from police work, Chris decided to pursue her writing career. She writes three different series. Her historical romance series is called, Knights in Time. Her romantic thriller series is Dangerous Waters, and the latest book, Silk, is book one in her mystery/suspense series, The Bloodstone series.

She currently lives in the Pacific Northwest with her husband and five wild and crazy rescue dogs.

Welcome to Immortality and Beyond. May I offer you a drink?
Zar, our Zombie Butler will fetch that for you. Zar…
I’ll take a Vampire Wine, red preferably on the dry side.

Back cover blurb for In Time For You 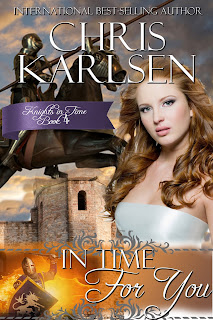 While horseback riding in the English countryside, sisters, Electra and Emily Crippen find themselves trapped in a tear in time. Thrown back to 1357 England and caught by a local noble, they are in a place that is home but as frightening and unfamiliar as an alien world would be. With no idea how the tear in time came about, the one thing they do know is: they must stay together and stay near to where the event took place in hopes of discovering the way back to their modern life. That certain need to stay together is the first certainty taken from them when one sister is forced to remain in England and one is sent miles away to Wales by royal order.

There is one other hope for help the sisters don’t know exists. It’s Electra’s lover, Roger Marchand. A time traveler himself, he never told her of his past. When he realizes what has happened to the sisters, he enlists the help of a scientist friend to help him open the suspected passageway through time. Any effort to save Electra and Emily will likely cost him his life. This was the time Roger came from, a time when his country, France, was at war with England. If he is discovered on English soil while searching for the sisters, he will either be killed or taken prisoner of war. Any risk is worth saving the life of the woman he loves.
Excerpt:

While she ate, the button on Electra's sleeve fell out of the frog loop. She didn't hook the button again, reaching for her wine instead. The sleeve pulled back from her wrist to expose her watch, which she hadn't thought to remove.

"What is that?" Simon asked and pointed to her Seiko.

"A watch." What a bizarre question. There wasn't a corner of the planet that people didn't recognize a wristwatch.

A frown slowly formed and he stretched across Emily and took hold of Electra's hand to tug it toward him for a better look. He turned her hand over and in a matter of seconds had the clasp undone.
He brought the candle in front of his trencher closer and held the watch under it. "What do the numbers mean?"

"It's a clock, a miniature timepiece you wear on your wrist."

From his expression, the explanation puzzled him. "Do they not have candle clocks in this Greenland you claim you're from?"

How to explain the abundance of various clocks to a man who apparently has no context for the anything beyond a candle clock or similar ancient means of telling time?

"Are you saying you've never seen a clock?" Emily asked.

Emily bent her head nearer Electra and whispered, "Are you thinking what I am?"

Simon ran his finger over the watch face. "These small digits, what is their meaning?"

"What year were you born?"

Electra didn't care for the speed which Simon answered. She held onto the small hope this was some odd reality show and that he'd stumble or hesitate before coming up with a year. "No reason, I was just curious." She turned to Richard who'd been chatting with the serving girl. She tapped his arm. Getting his attention she asked, "Richard, what year is this?"

He tipped his head like a dog hearing a strange noise. She assumed he too thought her mad for asking. "1357. Do you measure your years differently in your native country?"
"Yes, it's a different time there." A different world. She looked over at Emily, who'd been listening. The color had drained from her face.
For both their sakes, Electra fought to keep from falling apart in front of the whole room. She failed and began to tremble uncontrollably. She balled her hands into fists and turned from Simon to Richard. "I need to go outside. I feel sick."

"I'll go as well." He smiled. "Just to make certain nothing untoward befalls you."

There’s atwo randomly chosen commenters, and 2 e-copies of In Time For You to

two randomly chosen commenters.
Watch for my upcoming review on Valentine's Day! Thank you so much for stopping in

Chris. It was a pleasure talking to you.