Book Review & Interview with Laura Bickle - The Hallowed Ones 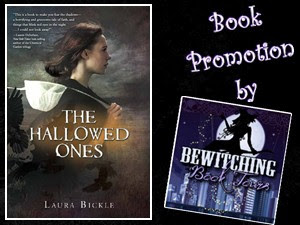 LB: Thanks so much for hosting me! I’d love some Witches’ Brew!

BK: Awesome choice! When did you first realize you wanted to be a writer?

LB: I’ve always been scribbling, since I was old enough to hold a crayon. I didn’t believe, until recently, that other people would want to read what I wrote. Fortunately, I’m no longer using crayons…at least, not to write with!

LB: My newest release is THE HALLOWED ONES, a YA thriller. Katie is on the verge of her Rumspringa, the time in Amish life when teenagers can get a taste of the outside world. But the outside world comes to her when a helicopter falls out of the sky near her house. Katie must confront not only a massive disaster unfolding in the world outside her community, but also the threat of darkness in her own increasingly fragile society.

LB: I live not too far from a large Amish settlement. When I was a child, my parents would take me to visit, and I was fascinated by a world very different than the one I lived in. I’d see Amish girls my age over the fence and wonder what their lives were like.

Some of that curiosity lingered, and I always wanted to revisit it in a story. It popped back into my head when I was writing about a catastrophic contagion. Considering all the incredible self-sufficiency they apply in their everyday lives, it seemed to me that the Amish would be uniquely well-equipped to survive a large-scale disaster.

LB: I try to ask “what if” questions that I haven’t seen addressed before. It’s like daydreaming on paper.

LB: The hardest part for me in starting any story is the beginning. The blank page intimidates me like nothing else! For this book, I think I wrote the first line and stared at it for three days.

LB: Katie is my favorite. Katie was an interesting character to write because she's very strong in a quiet, enduring kind of way. She struggles to develop her own moral compass, independent of her parents and community. That requires a great deal of fortitude, just as much fortitude as dealing with the evil creatures in her world.

LB: The easiest and most fun comes for me at the end. There’s more at stake at the end of the story, more action, more emotion. All the plot threads are beginning to weave together, and I feel like I’m running downhill. I forget that I’m writing and get the pleasure of watching the story unfold on its own.

So the resolution of THE HALLOWED ONES was my favorite thing to write. I wanted to both tie up the story and leave the possibility open for a sequel.

LB: I was totally open to having a sequel. When I finished with THE HALLOWED ONES, I didn’t feel as if I’d completely told Katie’s story…she’s going to evolve a lot more, and that needs another book!


BK: Now for a little fun, and into your everyday life, What is a day in your life like?

LB: I have a day job at a library, so I get the pleasure of being surrounded by all kinds of research materials and inspiration. When I get home, I do my best to keep a writing calendar and to commit to writing a certain number of words a day.

LB: I collect Tarot cards and I’m owned by a herd of cats…those usually keep me pretty busy. My husband and I are also amateur astronomers.

LB: I took bellydancing classes a couple of years ago. It was a lot of fun, and I still have some jingly coin belts hanging about the house that have survived being dragged around by the cats.

LB: I love all flavors of fantasy. Robin McKinley’s HERO AND THE CROWN started my love of fantasy. I read it when I was a pre-teen, and fell in love with fantasy ever after. It was the first book I’d read that had a female protagonist who slew her own dragons. I was hooked.

LB: The best piece of advice I’ve ever received is to set up a word count calendar and use it. It’s too easy to let the days and weeks slip by without anything productive happening. To that end, I really suggest that writers try National Novel Writing Month at least once. It got my excuses and blocks out of the way, and helped me learn that what I thought were my limits were not really limits. They were just walls I’d set up in my head.

LB: I’m working on the sequel to THE HALLOWED ONES, which will be called THE OUTSIDE. It’ll be released in September 2013.

BK: I'm so excited to know there will be more to come! Where can readers connect with you?

BIO: Laura Bickle has worked in criminal justice and library science. When she's not patrolling the stacks, she's dreaming up stories about monsters under the stairs. She’s authored four fantasy novels for adults, and THE HALLOWED ONES is her first teen novel. 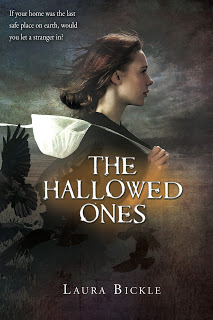 If your home was the last safe place on earth, would you let a stranger in?

Katie is on the verge of her Rumspringa, the time in Amish life when teenagers are free to experience non-Amish culture before officially joining the church. But before Rumspringa arrives, Katie’s safe world starts to crumble. It begins with a fiery helicopter crash in the cornfields, followed by rumors of massive unrest and the disappearance of huge numbers of people all over the world. Something is out there…and it is making a killing.

Unsure why they haven’t yet been attacked, the Amish Elders make a decree: no one goes outside their community, and no one is allowed in. But when Katie finds a gravely injured young man lying just outside the boundary of their land, she can’t leave him to die. She refuses to submit to the Elders’ rule and secretly brings the stranger into her community—but what else is she bringing in with him?


Excerpt: A free excerpt of THE HALLOWED ONES is available here: http://www.laurabickle.com/the-hallowed-ones/?action=excerpt

Living in Pennsylvania, I am surrounded by Amish all the time. My husband also lived with them for a few years, but lucky for me he was never baptized into the Church. Needless to say, their community has always fancied me, and I love reading stories about their religious beliefs and how they live. I'm always asking "what-if" questions to my husband, but really never imagined an Amish story in the paranormal genre.

When The Hallowed Ones came across my desk, I didn't hesitate to jump on reviewing it. What can I say? I will give you four words...

I WAS BLOWN AWAY!

Not only has Ms. Bickle done her research, she has crafted a story that will leave you wanting more and more. I was so glad to know that this wouldn't be the last. The Hallowed Ones will grab you from the first page, and keep you guessing the entire length of the story. I was constantly thinking outcomes, and let me be the first to admit that I was continually wrong! It was amazing, and a wonderful, original read!

Yes, we often think of these things happening in our world, but have you ever thought, "What if that were to happen in an Amish community?" I know I never thought about that and I write PNR! What made it all the better, is that my husband knows the Amish community, and probably got sick and tired of me asking questions, but Ms. Bickle made it so true to life, you will almost take it for real while you're reading it!

Kudos Laura Bickle! A job well done and one to be very proud of! I can't wait for the next book. I'm definitely a new fan :)

You guys are lucky! Laura is giving you a chance to win a copy of The Hallowed Ones! I know! AWESOME! She will send a copy to one winner as long as it can be shipped by The Book Depository.

You know the routine, leave a comment with your email address and answer this question...
Have you ever thought of Paranormal things happening in an Amish Community?

Thank you so much for hosting me today! And I'm THRILLED that you enjoyed THE HALLOWED ONES! :-D

Not entering the giveaway. Just wanted to thank both if you for this great interview. And after seeing an episode of X-files that was about a sort of Amish community I have been fantasizing about paranormal things happening in an Amish community I will confess.

Never really gave much thought to an Amish community and the paranormal until I read the synopsis for this book. I look forward to reading it!

Amish and paranormal, what an original concept! Great interview!

Great interview as always! and your review made me want to read this NOW! lol