With Friends Like These by L. Hunter Cassells (Book Tour & Interview) Publisher: Amazon (November 24, 2012)
Category: Urban Fantasy, Paranormal
Tour Date: November, 2013
Available in: ebook,  107 Pages
Callie Walking is a freelance mage who solves supernatural problems. When a troubled client hires her to protect him from a “vampire”, she casts the appropriate spells and positions the usual amulets. Now, something has gone terribly wrong. Her client has turned up dead and drained of all his blood. The cops say it’s suicide, but Callie knows better.
Now she is on a mission to find out what went wrong. In her search she uncovers an ancient, long-hidden power. It challenges Callie’s deepest beliefs about right and wrong, good and evil. She knows her life will be forever changed… if she survives.

Praise for With Friends Like These:
“ I really enjoyed the characters, their histories and especially their interactions. There was nothing trite or old hat. It was surprisingly “new hat.”
I recommend it to anyone who loves vampires and even to those who don’t usual like vampires. It shows that there is always a refreshing new way to look at seemingly settled concepts. Now, I am just waiting to read the next book. These characters have not come even close to exhaust the possibilities inherent in their personalities.”- Skeptic, Amazon Reviewer
“Best book I have read in years!  I am a avid reader, but never read vampire books of any kind. What a surprise was waiting for me. This book is wonderful, and a written with great wit. I laughed out loud. The suspense kept me turning pages until I had read the whole book in one day. Now I am yearning for another book about “Miss Callie”. I would enjoy reading more from a truly gifted author. This should be a national best seller.”- Earle Drake, Amazon Reviewer
“Lots of fun! It’s great to see Cassells’ writing in a more modern setting, and her characters are as engaging as ever. One of my favorite things about her stories (past her artful descriptions) is the depth and accessibility of her characters. I was impressed that even in a short like this she was able to smoothly set up a world with lots of potential for back-story and new plots – I hope she uses it!
Would recommend to a friend (did already).”-AJCB, Amazon Reviewer

Welcome to IAB I'm so glad you could stop in today to chat. May I offer you a beverage?

LHC: Witches Brew, please. Wine seems a sad thing to do to a sweet little grape, but barley into beer is nothing less than apotheosis.

Great choice and perfect for this chilly weather. 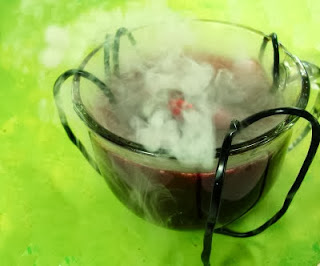 LHC: A grey day, a listless, indifferent breeze. Oh, crumbs, the bird feeder’s empty again--I guess “pigs” do fly. A few purple morning glories still cling to the porch railing, but the green beans twined there have gone brown. Across the driveway, half a dozen chickens mill about as if their electric fence was so much air, and they hide their eggs in the brambles.

LHC: Office? It’s so messy, it hasn’t even that much integrity. In the living room is my beach chair, with a cup holder for a coffee thermos or beer bottle. The remains of the mail litter the floor, and my footstool has been hijacked by a grandson. My bedroom has the unfinished 3’ plank across two columns of book boxes for a desk-cum-sewing-table, but the exercise ball I used for a desk chair popped and I haven’t replaced it yet. Still, there are shelves above, where the notebooks, napkins and other scraps associated with my writing are at least together, if not sorted.

LHC: Feet up at least to heart level is preferred, but I’m adaptable.

LHC: It must seem like silence to others, but since I sort of speak my text in my head as I write, it doesn’t seem quiet to me. External sounds neither help nor hinder--so long as it’s not conversation! Conversation hijacks me into participating.

LHC: Callie Walking, a young woman with a knack for magic, makes a living helping people with supernatural issues and still wonders what she wants to be when she grows up. Because magic comes readily to her, she considers herself to be not “really” working, but can’t bring herself to get a “real” job like, say, accountancy or programming.
She helps support a younger brother, crazed in some as-yet-unrevealed magical incident, and her Lakota father who works intermittently as a stage shaman. She is somewhat haunted by Coyote, the Native American trickster.

LHC: I’m rather a fan of moral ambiguity. I like leaving readers unsure whether an event or a character is “good” or “evil”; even better is leaving them wondering the same about anything, real or fictional. Is it “good” to kill a killer?

LHC: I yield to the character; their story is invariably better than any plan of mine. When a story isn’t flowing, there is some issue or concept I haven’t yet gotten clear on myself; reading nonfiction is my best lubricant. It helps that I have some half a dozen very different stories currently in progress--when stuck on one, switching to another helps. At least, it keeps me from feeling too much like a slacker.

LHC: But that would force me to reveal my first name! I’ll use my preferred nom d’adresse:
mischievous
eldritch
light
layered
yarn (a cheat; there is a dreadful dearth of “y” words!)
recondite
necromantic

LHC: When I realized that my daydreams took the form of describing, in words, precisely what I was seeing/doing/experiencing, and that I would go over a scene again and again until I was satisfied with the grace and power of the phrasing--just like in my favorite books--I thought, why not write it down?

LHC: A happy hooker, whose “super-power” is the ability to manipulate other people’s sex drive.

LHC: Two weeks in Maui in an Anthony Robbins seminar, climbed and jumped from a 50’ pole and did a 30’ firewalk.

LHC: Panic. What if people like my stuff and I can’t write fast enough?

I am by preference a creature of the night.

Pen&Paper/laptop or Computer? I have a lovely slim lightweight MacBook, and a spiffy, almost medieval-looking padded bag to carry it in, anywhere. So I carry the carrier (and laptop) in a Girl Genius Jagermonster backpack, because I still have to have my (spiral-bound, college-ruled, multi-tabbed) notebooks. Notebooks don’t quit for lack of battery.

Classic rock; Celtic; mostly folk. But Country does have the occasional gem, like Billy Currington’s “God is great, beer is good, and people are crazy.”

What’s vanilla? (If it ain’t chocolate, why eat it?) L. Hunter Cassells grew up near the Germantown of which she writes, and now lives not far away, in a curious household involving a happy man, two ambiguous cats, two loud grandsons, their studious moms, and what might be a dozen chickens (chickens come, chickens go; best not to ask too many questions).  She has seen more than twenty thousand days and nights, holds a degree in geology, occasionally goes contra dancing, has belonged to the Society for Creative Anachronism longer than most of its members have been alive, and herds nuclear physicists for a living (no, really, she does).
L. Hunter Cassells Website

Mom With a Kindle Nov 19 Interview

The News In Books Nov 21 Review

The News In Books Nov 22 Interview

Thanks for taking part in the tour and hosting L.!

Thank you for hosting me. I had much fun with it!