Dares And Dreams by B.K. Walker 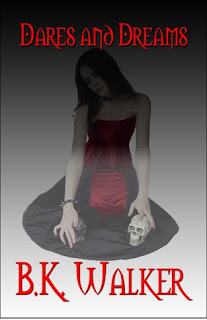 About  the book:
Lannie Spenser just lost her father unexpectedly. When the mother she has never met arrives the day of the funeral, Lannie is introduced to a world she never knew existed. Overwhelmed with the fact that she was born a witch that will come into her full powers on her twenty first birthday, Lannie also learns that her Mom, , is a Vamp-Witch. Now that she knows what she is to become, Selene encourages her to accept immortality and become half vampire to save herself from a Vampire King. The King hunts her, hoping to be the one to make her immortal, as only Lannie can give him the power that will help control, and rule all of the creatures of the night.

As Lannie tries to embrace it all, she finds Ash. When both of them dream of the same little blonde boy, Ash is led to Northeast Harbor, Maine to help protect her from the Vampire King. Ash vows to protect Lannie, never expecting to fall in love with her. When an unexpected visitor shows up to the bar that Lannie works at, Ash fears she will find out that he has a secret of his own.

About BK Walker:
BK has always had a niche for writing.  As a child she used to write short stories and play school with her friends reading these stories as an assignment.
After she was an adult,  she played around with short stories that would randomly come to her,  then finally put her words into her first novel titled Near Suicide,  a dramatic romance.  After her novel was released,  she had her second book,  and first try at paranormal come to her in a dream.  Three months later,  her book,  Dares And Dreams was at the publishers.  Though that wasn't the original title for the book which was,  Dare To Dream,  the title it now holds stands true to the content within the pages.

Review by Detra Fitch ***1/2 Stars from Huntress Reviews: The plot is awesome! It is not too complex, a bit mysterious, and very intriguing. A few of the secondary characters jumped out at me, such as Jareth and Kali, who guard Lannie. I sincerely hope to see more of them in the future. I believe Jareth's tale could be even better than Lannie's. Author B.K. Walker has created a world that is too good for just one visit! ****
BK is currently working as a pediatric nurse and runs BK Media Entertainment.  She is living in central Pennsylvania with her three children,  Brittney,  Hunter,  and Danny.  They also have a himilayan cat named Michael,  and a pit bull named Rancid.
Aside from her writing,  she enjoys watching her children play sports,  and attending various band performances in her area.  A few of her favorite bands are Shot In The Dark 357,  Mia Mania,  and A Step Forward.
You can also find BK Walker on BK Walker Books,  Facebook,  Myspace,  Authors Supporting Authors,  and Twitter.
Posted by Nightly Cafe at 12:55 PM

hey that book seems to be very interesting!! Thank you for sharing, I would have never recognized it without you!

Thank you for following and I will definitely follow you back.

I'm all signed up to follow you wherever your paranormal path takes you!!!....an me lol