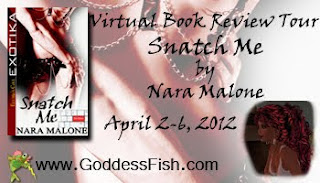 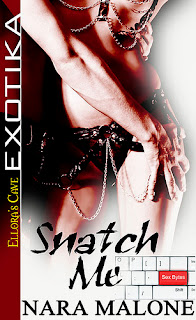 From the moment Jolie discovers the Quarterz, a virtual post-apocalyptic world for capture role-players, she can’t resist the challenge. She’s chosen a hard game, where sexual submission to a captor is expected, demanded, no quarter given. She uses the challenge to escape real life and feels a sense of kinship to a world like the Quarterz, a society too broken to fix.


Mack created the Quarterz and took a gamble when he secretly lured Jolie there. He suspects he and Jolie share sexual interests that neither can admit in person. Now he has to hope that time in the Quarterz can help Jolie cope as she struggles to rebuild her life. He has to stand back and allow her to find her way in a game where he is not always the captor. But when the game is over, he’s determined to be the one who wins Jolie for real.


Let me be honest here...I loved this book! This is the first time I've experienced Nara Malone's writing, but I have to say that I love her writing style, her detail, and I will be going to buy her other books, which look oh so yummy :).


Malone is definitely one of those writers that can really make you feel what the characters are going through, and vividly paints that picture so you get a clear vision in your mind. I love these kinds of books, and let me tell you, when an emotion strikes me from reading the words on the pages, you know it's a damn good book. Believe me, I didn't feel exactly what Jolie was "feeling", heh hmmm, but I was struck :). She also wrote in both first person (in the Quarterz) and third person (in real life), very hard to do and she accomplished it beautifully.


Though this is a shorter read, and definitely fast paced, not once did I feel like the story was rushed, I never got lost, and in the end, I was just wishing there wasn't an end! The brilliance of Malone's mind, pulls you in and keeps you tugging for more. Snatch Me was excellent and I would recommend it to anyone just needing a good dose of a great story.

A graffiti-covered bus with a flat tire sat at a bus stop opposite the alley. No sign of life stirred up and down the empty street. A lone street lamp glowed two blocks down. If there were stars in the sky, a blanket of smog concealed them. I had two choices, right or left. Back had been discarded as an option before I arrived.
I went left, toward the light. If you’re thinking that’s a sign I’m not completely crazy, you’d be wrong. When you’re prey the darkness is your friend. I surveyed the urban wreckage for any sign of life, a shadow with an organic shape. A flicker of movement. I knew I wasn’t alone here. I could feel eyes watching. I turned my head, straining to hear, opened my mouth as if that might amplify the sound. I tasted the sharp tang of danger on the air in the too-quiet quiet of this barren world.
There, just a block up, I thought I saw a flicker of shadow at the edge of a doorway, blue rays at the edges of a shaded window. I froze, worked hard to slow my ragged breath, rein in my racing heart.
I had a story ready. Not that stories were necessary. Not that anyone would bother to listen. A woman here could expect one thing. A woman here, by her very presence, consented to whatever happened without her consent. Those were the rules. I knew them. I was ready. But a story made it all feel less crazy than it was. If it provided distraction—teased the hunter’s mind into fantasy for a moment—it might give me the edge I’d need to win this first round.
I’d say I was lost, snatched from my tribe. Having escaped from the original abductor, I was trying to find my way back. I would finger the wide tear running down the seam below the armpit of my top. It showed enough to confirm I was braless, not that the peaks of my nipples, visibly hard under ribbed fabric, wouldn’t make that obvious. While my would-be abductor was looking where I wanted him to look, I’d whap him with the nearest handy object. Then the chase would be on.
I might be prey, but I didn’t intend to be the sort who cowered in shadows. After all, wasn’t the best defense offensive?
My heart had moved into my throat. I swallowed it and moved toward the doorway that had shown the only flicker of life I’d seen. A couch sat halfway on and off the curb near the stoop. I wondered how many women had been used right there, street side. I was certain I was smart enough not to be the next. A trashcan lid sat propped against the arm closest to me. I stepped over a dirty puddle to reach it, briefly taking my attention from the doorway, and when I looked up it was into the face of a man who’d materialized soundlessly. I froze. Hairs rose on the back of my neck and panic closed my throat. My carefully planned story vanished under his steel-blue stare and my nerve fled like a rabbit from the hounds.
Behind me a bell jangled. He frowned. “What’s that?” he asked in a bone-meltingly sexy baritone.
I sighed. “That’s the sound of time running out,” I said. “Sorry.” 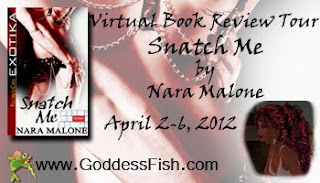 About Nara Malone:
Whether it's a shapeshifter romance exploring the primal power of the wild feminine, or BDSM romance where love digs into a character's shadows, Nara believes romance should open the door and push lovers into a new dimension: sexually, emotionally, and sometimes physically.
Nara Malone is an award winning novelist and poet. As a freelance journalist and writer, her feature profiles on women entrepreneurs and her romantic short stories have been published in newspapers, magazines, and digital publications.Nara lives on a small farm in the shadow of the Blue Ridge Mountains. When she's not writing, she loves to run, hike, bike, and kayak. Every story she tells incorporates her love of animals, nature, and adventure.You can contact her through Twitter, Face Book, or Yahoo mail. The user ID is nara_malone for all three.

Thank you for hosting Nara today!

Hi there. Thanks so much for hosting me today. I so much appreciate you taking time to read Snatch Me and give it such a thoughtful review. Glad you enjoyed Jolie's journey.

Hi Nara, thanks for stopping in and glad you enjoyed my review. The book was great and you're an exceptional writer :). GFP - You're welcome it was a pleasure.

I like that this is a different idea for a story. I like reading unique books. I can't wait to read more.
luvfuzzzeeefaces at yahoo dot com

Another great review. And the trailer is really good. What a fun tour--learning about a new (to me) author and a very different book!

This looks like a great, completely different book. I don't have any experience with alternate worlds and none of the stories I have read were set in alternate worlds.
June
manning_j2004 at yahoo dot com