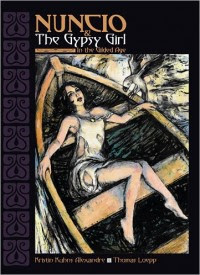 Nuncio and the Gypsy Girl in the Gilded Age is the first in a series of three graphic novels narrated by the African Grey Parrot Nuncio.This is the story of Neci, the beautiful gypsy princess who is infatuated with the brilliant composer/pilot Ezra. Neci lives at the turn of the century in Dayton, Ohio, where inventors and engineers have turned the city into the Silicon Valley of the day.

Like everyone in America at this time, Neci and Ezra want to improve themselves and their lot. While Ezra is besotted with the gypsy girl, his head is turned when the well-connected Edith offers her love and her connections to Ezra.
The two women confront each other during the rescue efforts for survivors of The Dayton Flood. Edith recognizes that she is faced with a significant rival for Ezra s affections. She sets about to abolish he enemy.
As the story unfolds, Edith discovers inside information that the Lusitania faces a real threat of German destruction when it makes its crossing to England. Edith decides to keep this information to herself. She imperils the lives of Neci and the Hubbards.
Neci and Ezra s benefactors and friends, The Hubbards, choose to make the crossing. When Ezra takes Neci to the send-off for the Atlantic crossing, his emotions overwhelm. He is seen making his way on board.
After a friendly breakfast The Hubbards and Neci find themselves on deck as the ship is struck by a torpedo. The Hubbards choose death and Neci frees our narrator Nuncio and jumps into the Irish Sea. We must wait for the next book to uncover her fate and the fate of the man she loves.

I loved it! I wasn't too sure what I would get when I was asked to review this graphic novel, but I'm so glad I accepted. I'm not a big fan of history, but Alexandre did a magnificent job with description and era that I was sucked right in. Tom Loepp is the illustrator and he did fantastic! It all blended so well together, you couldn't help but read it through.

It's a beautiful love story turned love triangle. While a young woman named Neci is in love with Ezra, he just doesn't feel the same way thinking she's too young. He goes his own way, leaving the gypsy community behind. This is when he meets the beautiful Marlene, who is almost appalled that she's fallen for him so quickly. They both share a love of music, and when Neci sends her animal friends to spy, she realizes that this Marlene may just be the one to make Ezra famous. With the new world being built and autos being introduced, Neci may be forgotten from Ezra's memories forever.

Marlene has her own agenda and though the book leaves you with a continuation, you're definitely going to want more. I definitely give it 5 flaming roses! Anxiously waiting book two.

Kristin’s last books, “Find a Great Guy: Now and Forever” and “The Perfect Gentleman: the Secrets Rich Girls Use to Find the Classiest Guys,” received excellent reviews from Amazon and Vanity Fair Magazine. The much trusted “Kirkus Review” recommends and lauds this relationship book. Read more reviews here.
Kristin is a relationship expert and her website is called www.thenewgentleman.com.
This author has also worked as a news reporter for Channel 13 and Channel 5 News in NYC and hosted and produced her own show called “Enough Is Enough,” a syndicated issue oriented talk show. She was a featured columnist for The Dayton Journal Herald and has written for many magazines including Town & Country, Harpers Bazaar and The Daily News Sunday Magazine.
Kristin works closely with The Humane Society of America and auditioned for Oprah’s new OWN network. Her audition proposes a show about the bond between animals and people http://www.youtube.com/watch?v=O8oPe86xt3s.
Kristin was a publicist for Rums of Puerto Rico and The Economic Development Administration of Puerto Rico. She also hosted a luncheon series for executives at The New York Yacht Club for The Chairman of Ammirati & Puris Advertising.
Kristin Alexandre is a producer with Dahooma Productions where she assisted with “Not For Nothing” – a soon to be released contemporary romantic comedy.
The author grew up in a fifth generation family from Dayton, Ohio and she currently serves as President of that family’s investment partnership.
She received her BA from Sweet Briar College and is a member of The New York Junior League.