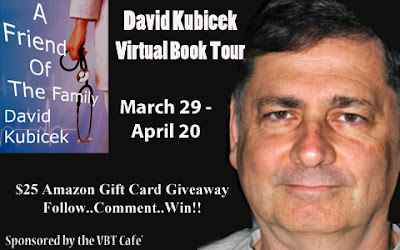 Welcome to Immortality and Beyond! Today I'm pleased to introduce you to author David Kubicek, touring with his book A Friend of the Family.

BIO: David Kubicek has published several short stories and hundreds of articles. His books include A Friend of the Family, In Human Form, The Moaning Rocks and Other Stories, and the Cliffs Notes for Willa Cather’s My Antonia. He edited two anthologies, The Pelican in the Desert and Other Stories of the Family Farm and October Dreams, A Harvest of Horror (with Jeff Mason). He has owned and operated a publishing company, and his short story “Ball of Fire” was nominated for a Pushcart Prize: Best of the Small Presses. For nine years he wrote for the Midlands Business Journal, and for two years he was a regular contributor to Grassroots Nebraska. He lives in Lincoln Nebraska with his wife Cheryl, son Sean, two dogs and a cat. 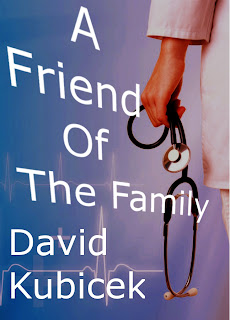 In a desolate future, long after the nuclear war that nearly destroyed Earth’s civilization, practicing medicine is illegal. Health care is provided by Healers who treat patients using primitive methods like chanting and bleeding. Hank is a doctor who practices medicine only for himself and his family. His fear of being sent to prison has estranged him from the Underground, the loose network of physicians that tries to help people who have lost faith in the Healers.
Late one evening a 16-year-old girl named Gina knocks on his door. She is a telepath, a byproduct of the long-ago war. She not only knows that Hank is a doctor, but also that he keeps his medical equipment and supplies in a cellar under the bedroom. She threatens to bring the police unless he accompanies her and makes her father well.
When Hank arrives at the family’s drafty basement flat he finds that for the past week Vic has been under the treatment of his sister, Gina’s Aunt Rose, who is a Healer. But despite Aunt Rose’s potions and spells, Vic has gotten steadily weaker. As a last resort he has agreed to try a Medicine Man. Much to Hank’s relief, Aunt Rose is out tending patients, but Vic’s wife, Maud, is terrified that Hank might hurt her husband. She draws Hank aside and touches her robe.
“I have a knife in here,” she says. “My child doesn’t think I’d use it, but I would.”
Gina considers her mother too weak to be head of the family if her father dies. Gina is too young, and her two brothers are dead--both of them died while under the treatment of Aunt Rose, who is positioned to become head of the family.
When Aunt Rose returns unexpectedly, Hank is confused that she doesn’t order him out or go for the police. Gina tells him telepathically that Aunt Rose believes Vic will die, and she wants Hank there to take the blame.
Tensions between family members and Hank rise and fall as Hank works through the night and into the morning to save Vic’s life, but Vic becomes steadily weaker. At one point, Gina asks Hank why he came with her that night, and if he won’t use his knowledge to help others, why does he still practice medicine? He becomes irritated because he can’t answer her.
Just before dawn, Vic stops breathing, and Hank’s frantic effort to resuscitate him fails.
Aunt Rose then makes her move to take control of the family, but Gina attacks her. Aunt Rose fends her off and finally slaps her so hard across the face that the girl crashes into the wall and slips to the floor stunned. Like a lioness coming to the defense of her cub, Maud pulls her knife and pushes Aunt Rose away from her child.
Aunt Rose reaches for the knife, and Maud slashes her hand. Aunt Rose is shocked and confused by the turn of events, and like most bullies, she backs down; suddenly Maud has become the dominant person in the room.
A short time later when two police officers arrive, Aunt Rose shows them her sliced hand and tries to turn Hank in, but Maud tells them Aunt Rose was bleeding Vic and her knife slipped.
“She feels bad ‘bout him dyin’,” Maud says, and sends Aunt Rose into the other room to lie down.
One police officer asks Hank who he is. Gina, who has hidden Hank’s medical bag, is suddenly tongue-tied, but Maud says: “He’s a friend of the family.”
After the police officers leave Hank takes his bag and goes out into the dawn. Although he’s just lost a patient and has come closer to occupying a prison cell than he ever wanted to, he feels more positive than he has in years because he knows now why he practices medicine.
Excerpt 1
Gina unbolted the door and lifted off the bar, set it with a bump in the corner, and went out. A cool breeze, touched with the smells of mildew and rotting wood, whisked into the room. It dried the perspiration on Hank’s face and rocked the lanterns. The door slapped shut. Maud went to bolt it. When she came back, she drew her chair closer to the bed, sat down. She touched her robe near the left shoulder.
“I’ve got a knife in here.”
“Maud…”
“I understand,” Hank said, feeling cold.
“My own child doesn’t think I’d use it, but I would.”
Hank looked down at his hands. He tried to still the tremor within him.
“I don’t want to cause trouble.”
“You bein’ here is trouble.”
“Maud, stop it,” Vic said. Then he was coughing again.
Hank prepared penicillin and vitamin injections. His hands shook. He had difficulty grasping the syringes, and he couldn’t make his muscles do what he wanted them to.
Hank put the syringes into his medical case. He didn’t want to give the injections until Gina got back. He tried to convince himself that it was common sense to wait until he had checked this man more thoroughly. But besides the blood pressure, there were no more tests he could do. He was afraid of what this old woman might do if he frightened her badly enough.

You can follow David's tour HERE, and also pick up the trivia questions for the contest. Thank you so much for chatting with us today David. It's been a pleasure. 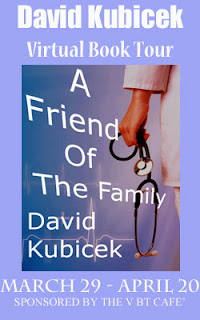 Thanks so much for chatting today David.

Glad to, BK. Thank you very much for inviting me to Immortality and Beyond.