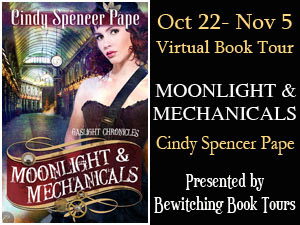 Welcome to Immortality and Beyond. May I offer you a drink?
·
I think I’ll go with Witches Brew. Thanks! I’m delighted to be here today.

Wonderful. Now that we're all settled in Cindy, I'm so excited to chat with you today. I love the covers on your books and can't wait to start reading them. For you guys, Cindy is offering you a chance to win your choice for Book 1 Steam & Sorcery or Moonlight & Mechanicals in pdf or epub formats. Leave a comment with your email telling Cindy what is that draws you to want to read her books.

BK:  When did you first realize you wanted to be a writer?
CSP: It was a gradual thing for me. I’d noodled around with it my whole life but didn’t really give it a serious shot until my mid-30s.

BK:  Please tell us a little bit about your current release...
CSP: Moonlight & Mechanicals is the fourth story (second full-length book) in the Gaslight Chronicles series from Carina Press. It features Wink, a street kid adopted into the nobility, now all grown up and a brilliant engineer. She has to choose between a Knight of the Round Table (in this world, they still exist, the descendants of the originals.) who adores her and the taciturn werewolf, Inspector Liam McCullough, who she has loved since she was sixteen. Of course they also have to save England while they’re at it.

BK:  What inspired this particular novel/book?
CSP: When I decided to try writing a steampunk romance, Wink and Liam were the first characters to form in my mind. As they evolved, though, I realized the story started much earlier, with Wink’s adoptive parents. (Steam & Sorcery, book 1 of this series.) Wink and Liam were put on hold for a while, but now it was their turn.

BK:  How do you keep your writing different from all the others that write in this particular genre?
CSP: I like to think I have my own voice. In this genre, a lot is about the world. Mine mixes magic and paranormal with the futuristic technology that often goes with steampunk, and I think I’ve built memorable characters who can stand on their own.

BK:  What was the hardest thing about writing this story?
CSP: Keeping Wink and Liam apart long enough to make it a story. They’d both been in love with each other for years.

BK:  Which character was your favorite to write for in this story? Why?
CSP: I’m particularly fond of George the clockwork mastiff. He can do things that even Wink, who built him, can’t quite explain. He’s made of brass and nuts and bolts, but there’s something very real about George.

BK:  Tell us about the one scene you had the most fun writing…
CSP: It was actually three scenes. One by one, each of Wink’s younger brothers corners Liam and asks about his intentions. Since they’re family friends, much younger than he, and Liam really doesn’t plan to marry Wink (at this point in the story, anyway) it’s awkwardly uncomfortable.

BK:  Now for a little fun, and into your everyday life, What is a day in your life like?
CSP: Pretty unexciting. I’m the servant for two dogs. I get up, I write, interspersed by letting them in and out. I have two college-aged children who may be playing x-Box while I’m trying to write. (My desk is in the family room.) My husband cooks, we all grumble about cleaning up, and then I either write more or watch TV or read.

BK:  What do you like to do when you're not writing?
CSP:  Like most authors, I read voraciously. I’m a fan of The Big Bang Theory, Castle, Warehouse 13, Doctor Who and other geek TV. We watch a lot of history, science, and military channels in our household. In the summer, we hang out as much as possible in costume at Renaissance fairs. We’re just starting to get into the steampunk social scene and I’m really enjoying that!

BK:  What is one thing your readers would be most surprised to learn about you?
CSP: Unlike a lot of writers, I’m really good at math. I used to tutor high school students and do ACT/SAT prep in any math up to calculus.

BK:  What do you like to read? Who is your favorite author?
CSP: Wow, the list is endless. I love paranormal romance, with Jayne Ann Krentz (under all her names) and Elizabeth Peters/Barbara Michaels as prime examples. Also romantic suspense, some with a touch of paranormal, like Linda Howard and Elizabeth Lowell. I also read some SF and Fantasy, like Jim Butcher, Douglas Adams and Terry Pratchett. And historical romance, like Julia Quinn and Stephanie Laurens.

BK:  What is one piece of advice you can give to aspiring writers/authors?
CSP: Be in it for the long haul. Don’t expect it to be easy, but don’t give up when it gets rough.

BK:  What are you currently working on?
CSP: I’m revamping Nailed, a short story I did with Resplendence Publishing into a longer novella, at their request. I think the new one will be out after the first of the year. 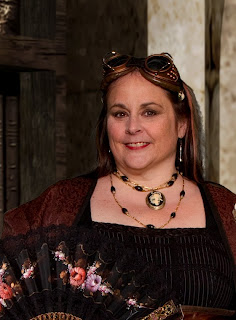 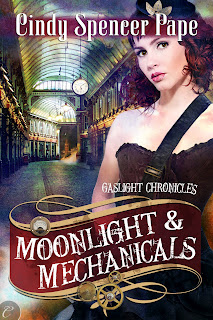 Engineer Winifred "Wink" Hadrian has been in love with Inspector Liam McCullough for years, but is beginning to lose hope when he swears to be a lifelong bachelor. Faced with a proposal from a Knight of the Round Table and one of her closest friends, Wink reluctantly agrees to consider him instead.

Because of his dark werewolf past, Liam tries to keep his distance, but can't say no when Wink asks him to help find her friend's missing son. They soon discover that London's poorest are disappearing at an alarming rate, after encounters with mysterious "mechanical" men. Even more alarming is the connection the missing people may have with a conspiracy against the Queen.

Fighting against time—and their escalating feelings for each other—Wink and Liam must work together to find the missing people and save the monarchy before it's too late... 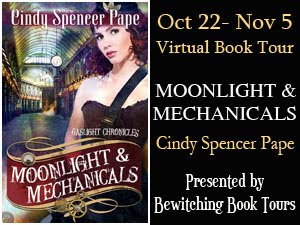