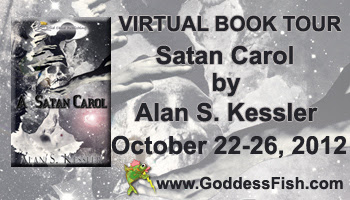 Today I am excited to introduce you to Alan Kessler, on tour now with his book Satan Carol at Goddess Fish Promotions! Alan is offering you a chance for 2 of you to win a copy of his book in your choice for print or e-book, PLUS, by following his tour and commenting, you also will be entered to win a $10 Wild Child Publishing Gift Card AND a pack of Snackwells Devils Food Cookies (Open to US/Canada Only)!

Welcome to Immortality and Beyond Alan!

Satan has a son who needs a soul. A Satan Carol is a story about how the devil, constrained by the cosmic law of freewill, tries to influence a young girl and her family into giving her child’s soul to him.

I wanted to write a story about faith and choices while using as its central character the devil, portraying him beyond caricature as someone with motivations we can understand. He is not the enemy of God but a fallen angel who feeling abandoned by his Father has a plan to regain His  love. Of course, since we are talking about Satan here, the plan is demonic.

I wrote my first story when I was ll. It was about the earth opening up and exploding with crawling creatures called Leeks.

I think spiritual horror is different by definition. I use blood but at the end of the story I want the horror to transcend the visceral and give the reader something to think about beyond the gore.

My habit of self-editing as I write. I want every sentence perfect, every word to fit not only with what I want to say but have a rhythm. Prose should be musical, that often means not using the same adjective, verb, or noun in the same paragraph or sometimes, same page. Pretty crazy, I admit.

I liked having Satan expound upon why he thinks he got the short end of the stick.

There’s an old farmer from Idaho, Orem, who landing on a beach, in the parallel universe of ShinyLand 7, believes he’s died. Crabs pop up from the sand and crawl over him, their large pincers snapping. He tries to brush the crustaceans away, his hands going through the scaly bodies.

No. One journey into this kind of hell is enough.

I get up, walk the dog, see the kids off to school, sometimes use the EMF meter I got for my birthday and look for electromagnetic anomalies in our old New England farmhouse.

I teach karate, watch Ohio State football and when I can, the Cleveland Browns. For those of you not familiar with the latter, it is a professional football team and according to a Brown’s website, rebuilding since 1964.

I hate violence
.
BK:  What do you like to read? Who is your favorite author?

I read non-fiction, except for horror writers I like, especially ones belonging to the New England Horror Writers association. I like Dickens and Faulkner. Both believed in ghosts.

Don’t let your imagination become a monster devouring the story.

My advice is a cliché—don’t give up; persevere. But here’s something more—write what’s true to your heart and with your own voice. Perhaps that will intersect with what the market wants, but if not, does it matter? The passion to write should be the overriding motivation for why we do it.
BK:  What are you currently working on?

A novel about a boy who grows up in a house of demons and a novella with a serial killer who gets what he deserves.

About Alan:
Born in a small town in Ohio. Married, with four children and a dog, Buckeye. We live in New England. 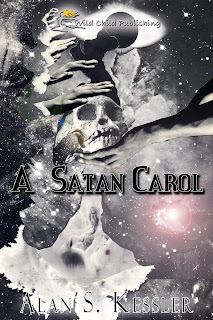 What does the devil really want?
Nostalgic for the Inquisition and plague, Satan feels neglected by the modern world that no longer blames him for disease and death. He plans to create a new genesis, a place where people will love him. For that, his son needs just the right soul.
And there is one—unique, powerful, able to heal. To get it, Satan has a plan that begins in Ireland in the famine year, 1848, and 180 years later traps a young girl and her family in demonic forces pushing them to kill.
A Satan Carol is a horror story about family values--even if they originate in hell.

On back of the EnViro truck continuing across the grassless, treeless land, Orem couldn’t tell if the gray, steaming waves he saw lapping sluggishly against a beach were those of a bay or ocean. He could distinguish the two structures whose dark shapes he had seen from a distance, the one closest to him an old farmhouse painted black, beyond it, a ramshackle pier standing a half mile from the shoreline. When the truck passed the pier, Orem saw what looked like a junkyard where the road ended. As the truck slowed before entering the junkyard’s fenced in area, he let go of the handle and jumped, rolling in dirt so dry and light he inhaled it as if it were another form of air. Choking, he took small breaths, sat there slowly adapting to the particle laced, heated atmosphere.
Out of the ground hundreds of small, shriveled crabs, their oversized, razor-sharp claws clicking, swarmed over him. Orem thrashed at them, his hands going through their bodies. Still frantically searching for what had strayed into their feeding zone, the crabs covered Orem’s face, twitched and convulsed in hunger and after running down his legs, disappeared with a popping sound into the dust, the last of their energy wasted on trying to eat a ghost. Orem saw no bite marks on his skin. He got up and by walking slowly, resting every few steps, the heat from the scorching land burning through the soles of his shoes, reached the junkyard fence of dry-rotted planks arranged haphazardly. Orem read a blistered, hand-lettered sign propped up against an old toilet: Moe Gut-man Salvge & antiks
A business sign…in Hell? The EnViro road from Boston to the White Mountains ended on Moe Gutman’s desert land where sinks, stained mattresses, broken pipes and large, cracked vats lay jumbled together along the fence. Through a hole in the boards, Orem watched the truck he’d jumped from pierce the ground with its titanium shaft. Sludge poured from the truck into a bubbling landfill marked Field 17. Nearby, a row of glowing, fissured mounds created by EvViro trucks pumping waste beyond the ground’s capacity to absorb it, rose 70 feet above fields 12 and 9. Brother Green’s business extended all the way to Hell. Orem didn’t understand. For him Hell was a place of torment, not entrepreneurship. In the Hell he imagined, the crabs would have chewed on his face forever. “Am I a spirit and this, damnation? The house and pier, the junkyard, designed to remind me of the world I’ve lost?” Except for the heat, he couldn’t feel or touch what was around him. This Hell of Brother Green’s trucks had its own dynamics and he remained outside it, looking in, detached and alone. “Is this my punishment for sin?  Eternal isolation even from other damned souls in this land of the dead?”
Hello hello. Can you hear me?
Orem blinked and looked over to where a boy sat slumped and drooling in a stroller parked a few yards from the junkyard fence. Behind the child, a young girl, very thin, stood gazing out at the water.
Children? In Hell? To Orem that didn’t make sense. And he was sure the girl had just spoken to him. Is it possible, by some miracle, I’m still alive? 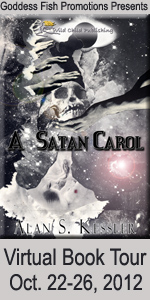 Thanks for taking time to chat with me Alan! It was fun :)