JA: As far as the eye can see, lush, green mountains surround me. Over a cup of steaming coffee, the view makes me smile in anticipation of a trail run.

JA: My writing space is tidy, but I wouldn't call it entirely organized. I have a small desk that fits in my small bedroom. On the desk are two printers, one color, and one black and white powerhouse. (Sentences read differently when they are printed, did you ever notice that? So I like to print them out to make sure it reads exactly how I intended). I also have a little divider/holder where I keep my hard-copy working manuscripts. Sometimes it gets so full it tips over, lol.

BK: What is a must-have, such as coffee or a favorite pen that you need to write?

JA: Pajamas. I do my best work when I am wearing a pair of super comfy pajamas.

JA: My writing area must be as quiet as possible. I used to listen to music when I wrote, and then I realized the emotion of the songs carried into my writing. Which can be a good and bad thing…maybe you didn't want flowery and lovey when you were constructing that fight scene?

JA: To effectively tangle with the bad guys, Slade needed to have some ‘bad’ in him. His mottos are things like, “One is none, and two is one.” Which refers to weapons, and his inability to trust that one won’t malfunction and let him down. That’s also his outlook on people… Needless to say, he’s well prepared and trained for any situation.

JA: I go for a run. Funny how five miles of hitting the trails can help you work through any sticky parts. It also helps the run fly by!

JA: Well, originally I wanted to be a jet fighter pilot, of course. Okay, so that was just a phase...following the movie Top Gun. Seriously, I’ve wanted to be a writer from childhood, but as life has a way of doing, it moved me in a different direction. Becoming and being a firefighter is full of rewards. I love serving the public. But writing is a release--an addictive freedom. I am very lucky to enjoy two such different, and spectacular careers in one lifetime.

JA: Well, I suppose everything I write about is crazy in some aspect or another. It’s not like there are demons, werewolves and elves running around amongst us…or are there?

JA: I grew up in a small community where I rode my horse to school everyday.

JA: Moon Marked, it is a stand-alone title based upon a woman bounty hunter in a paranormal world…

Coke or Pepsi? Neither. I’m not a soda drinker.

Fantasy or Mystery? Both!


Thank you so much for having us as one of your stops today. It has been great getting to know more about you and your book, and hope you will come back when the next release is out (*hint hint*) 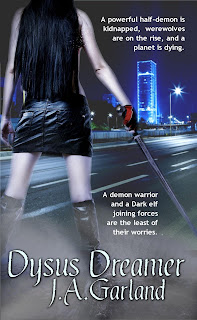 "A powerful half-demon is kidnapped, bloodthirsty werewolves are on the rise, and a planet is dying. A demon warrior and dark elf joining forces are the least of their worries."

Demon warrior, Slade Aesus, is determined to destroy the werewolves controlling his cousin. But a beautiful elf, consumed by her own vengeance, finds the wolves first. Botching her assassination attempt, Annwyn has the most powerful Packs in the world biting at her heels. Both fiercely independent, can the two join forces long enough to fulfill their missions and stay alive? 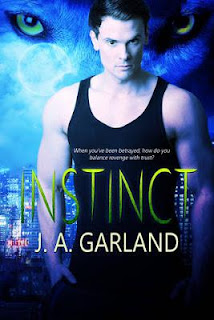 "When war erupts among the Shadow creatures, can enemies become allies?"

Lone wolf, Rory Archer, never failed a single mission. Now the hunted instead of the hunter, Rory unwinds a twisted trail leading back to Amber Arlington, a spirited Halfling tied to a world of Shadows. Bound to vows initially forged out of necessity, Rory and Amber's relationship surges into more than either of them had bargained on. Scrambling to identify their attacker before joining the casualty list, Rory is forced to do the unthinkable, or watch Amber become a slave for his species.

In the battle against Shadows, demons and all variety of monsters come out to fight. Can one wolf learn to trust in time to save them all?

Excerpt The Dysus Dreamer:
A solid assassination operation takes one part opportunity, two parts discipline, and three parts disposition. Having two out of three this chilly Seattle evening, Slade considered himself in abundance of good fortune.
Parked in front of a solitary office building, in the zone clearly marked “No Parking,” Slade cleared his mind of distractions consisting of the little here and there that could creep in and throw him off, just a hair, but enough to jeopardize his mission. Satisfied, he slid out of the rental car and re-tucked a stylish black golf shirt monogrammed with “Constantine Vineyards” into a pair of crisp, steel gray slacks. In this particular scenario, image was crucial.
Tonight, the element discipline presented itself by his waiting for the precise moment to strike. He made a living analyzing people and their habits, so he knew his targets relaxed around the holidays and were less likely to see the danger lurking behind his smiling façade. The current festivity du jour was Christmas, and coupled with his gift, destined Slade a popular man. I'm counting on it.
He moved around to the trunk, where he heaved free a slatted, wooden case. It smelled of musky oak. The peaceful scent hinted at candlelit dinners shared with a long time lover. His jaw clenched. Not in my past and not in my future.
Slade lugged his precious cargo toward the sprawling metal office building. Immense, the structure stabbed farther into the heavens than any other in the area, yet fell short. Just like my target. Outwardly, Joe Larsen appeared a dedicated family man, a real pillar of the community whose flourishing internet and telecommunications business, ProCom, employed hundreds. In reality, the werewolf belonged to the Dirty Dozen, a group of the twelve most ruthless wolf Packs roaming the earth.
How ironic. I was once your target. A year ago, the Dozen kidnapped his cousin Amber, a half-demon, half-human. Able to keep a shifter from shifting, Amber's ability proved irresistible, since more times than not, the Dozen's meetings devolved into an unproductive, fur-flying brawl. We saved Amber, but left behind some unfinished business. Starting with Larsen, the wolves would learn a lesson...a demon’s memory rivals the most scorned woman, and paybacks were indeed a bitch.

Writing urban fantasy under the pen-name J.A. Garland, Jennifer is a professional firefighter in the state of California. Jennifer is married and has two children, both of whom are as different as night and day. A graduate of Cogswell Polytechnical with a degree in Fire Administration, Jennifer always knew she wanted to be an author. (Except for a brief two month period after watching the movie "Top Gun," when she wanted to be a fighter pilot).

Jennifer admits she is an addicted trail runner, mostly because she is a devout consumer of all things cheese puff. If she misses you at the next mud run, you can come back here to see what's new in the world "where fantasy becomes reality." 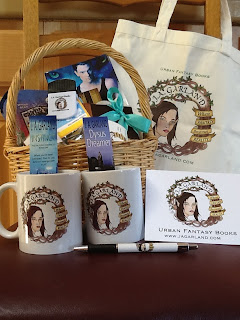 Drum roll please...Okay, so you already know who won. Congratulations to Catrina and Bobbye. I hope Catrina enjoys her $50.00 Amazon gift certificate, and Bobbye her big bag o’swag!
Thank you to all the readers and writers who took the time to drop in. And to the wonderful hosts for allowing me to 'hijack' their operations. I had a wonderful time on the Dysus Dreamer Book Tour. I hope you had a good time too.
-J.A.