Interview With Shehanne Moore - The Unraveling of Lady Fury

How much of yourself is hidden in the characters in your books?
I tell people nothing at all. Unfortunately that is not what they tell me. Obviously they see similarities in terms of the absolute niceness of my characters. The patience and serenity with which they greet life as a whole, accept defeat and never want the impossible. Ahem. Looking the other way here.

How much of a story do you have in mind before you start writing?
I see the beginning and that’s it. Obviously since it’s romance and you have to HEA, that too. Then I just hope I can get from one to the other.

Can you tell us about your Historical Romance?
Well, it’s set in Genoa, in a sort of émigré English community and it’s about a woman needing to conceive an heir in order to guarantee her future. All fine till husband meets with an unfortunate accident and then her ex-lover, the one man in the world who knows all her secrets turns up.

Will you write another book in the series?
It’s a stand alone, although they do have children so you never know.

How do you cope with writer's block?
I don’t think about it. To think is to fear.

How do you develop and differentiate your characters?
I like feisty characters, characters who are glaringly imperfect and not terribly self aware because let’s face it, which of us is truly self aware? I develop them by thinking of their lives before they got to the point where the actual story starts because the things that shape us as people are to be found there. I then think about what their goals are at the point the story starts, to see what little traits to give them they will soon shoot themselves in the foot with. Then I think about physical appearance. Their likes, dislikes.

Do you have specific techniques you use to develop the plot and stay on track?
A lot of candlelit baths and optimism.

How (or when) do you decide that you are finished writing a story?
When every end is tied and the conflicts external, then internal, are resolved.

Is there a message in your writing you want readers to grasp?
Even when the subject matter is weighty I think the ability to laugh is a huge thing. So I try to get these touches of humor even in the bleakest circumstances. Also real life isn’t perfect so why should my characters be?

What are you working on right now?
I am working on a story which I see as part of a series about an ex jewel thief.

Have you always wanted to be a writer?
Yes. I have actually. And I’ve stuck at all kinds of jobs in the hope that one day this dream would come true.

At what age did you discover your love of writing?
Seven. But it certainly wasn’t as simple as that.

What was the first story that you wrote?
A god-awful fairy tale. Some unoriginal claptrap about a princess in a forest.

When were you first published? How were you discovered?
It depends what kind of publication we are talking of. For years I’ve done all sorts of writing jobs, from girls’ graphic comics to non fiction. The Unraveling of lady Fury is my first published book. I subbed it to Etopia Press, I subbed it a lot of places actually, but they came right back offering a contract so...

What is the most difficult part of the whole writing process?
Probably accepting that you may fail. That no-one might want to publish your work and not necessarily because it’s no good either. Having a book out is no guarantee of anything.

What do you like to read?
I love historical stories. But some of my favs are oldies. I also love anyd of the forties noir books.

What writer influences you the most?
I would that impossible to answer when so many do. I love the sprawl of writers like Margaret Mitchell, F.Tennyson Jesse, the incredible detail of the times, but I also think these thirties/forties writers like Cain and McCoy had a huge talent for keeping it tight, while F. Scott Fitzgerald wrote the prose that is a delicacy.

If your book was made into a TV series or Movie, which actors would you like to see playing your characters?
Talking Margaret Mitchell I could see Vivien Leigh playing Fury. She has the right fire onscreen but I could also see Keira Knightley having that refined edge Fury constantly tries to maintain. Flint, I think Josh Holloway has the right onscreen mix of steel and grit.

Where can people learn more about you and your books?


Is there anything else you’d like to tell us about yourself and your books?


Apart from giving them a chance..! Nah.

Shehanne Moore is a Scottish born author who writes gritty, witty, more risky than risqué, historical romance, set wherever takes her fancy–stories that detail the best and worst of human behaviour, as opposed to pouts and flounces.

For years she did various jobs while pursuing her dream of becoming a published writer, so she was thrilled to be offered a contract by Etopia Press for The Unraveling of Lady Fury, six days after subbing it.
Shehanne still lives in Scotland with her husband Mr Shey. She has two daughters. When not writing intriguing, and of course, sizzling, historical romance, where goals and desires of sassy, unconventional heroines and ruthless men, mean worlds do collide, she fantasizes about cleaning the house, plays the odd musical instrument and loves what in any other country, would not be defined, as hill-walking. 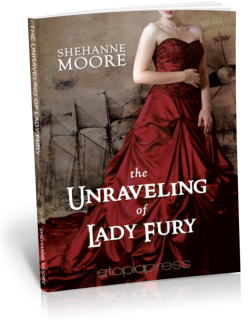 Rule One: There will be no kissing.

Rule two: There will be no touching…

Widowed Lady Fury Shelton hasn’t lost everything—yet. As long as she produces the heir to the Beaumont dukedom, she just might be able to keep her position. And her secrets. But when the callously irresistible Captain James “Flint” Blackmoore sails back into her life, Lady Fury panics. She must find a way to protect herself—and her future—from the man she’d rather see rotting in hell than sleeping in her bed. If she must bed him to keep her secrets, so be it. But she doesn’t have to like it. A set of firm rules for the bedroom will ensure that nothing goes awry. Because above all else, she must stop herself from wanting the one thing that Flint can never give her. His heart.

Ex-privateer Flint Blackmoore has never been good at following the rules. Now, once again embroiled in a situation with the aptly named Lady Fury, he has no idea why he doesn’t simply do the wise thing and walk away. He knows he’s playing with fire, and that getting involved with her again is more dangerous than anything on the high seas. But he can’t understand why she’s so determined to hate him. He isn’t sure if the secret she keeps will make things harder—or easier—for him, but as the battle in the bedroom heats up, he knows at least one thing. Those silly rules of hers will have to go…

Fury sat down and dipped the quill into the ink. She detected the faintest trace of nerves. It must be the fact Thomas lay in the cellar. Why else would a man, so great, so stalwart, so worldly as Captain Flint be nervous of her?
“Well, yes,” she said, listening to the pleasing scratch of the nib on the soft paper.
“Babies are not always made in a night. Of course, you wouldn’t know that, being you. It will take time.”
“All the more reason then to just get going. After all this time, sweetheart, you don’t know how eager I am.”
He strode across the tiled floor and the ink trailed a long dark path across the paper as he dragged her to her feet. Had it blobbed it might have been something to worry about. But she was very set on this. And calm. As calm as one could be having this man in her bedroom, knowing what was coming next out of dire necessity, her husband in a box in the cellar and her cast off, potential lovers on their way out the door.
“No, James.” She held a hand up between their lips. “There will be no kissing.”
“No kissing? Why in hell not?”
It displaced her calm to see him grin. She would have preferred that he was indignant. Especially as he was a man who thought he could settle all his arguments—with women anyway—with a kiss. But she kept her face cold, blank.
“Because.” In some ways she was cold. Cold with rage.
“Aw, come on Fury, didn’t you like my kissing? Hmm?” His breath, hot and male, brushed her fingertips. He wrapped his arms around her, splaying his hands across her back, so her hand might as well not have been there for all the protection it was.
But she was calm. Didn’t she have to get into bed with him after all? So, even the impulse to squirm was one she would squash. When she thought of all he had done to her, she would give him nothing. Not even the knowledge she found his proximity so unsettling that she sought to pull away.
“Your kissing was fine, in its way, I suppose. But kissing is a sign of affection.”
“How do you make that out?”
She knew exactly why he scratched his head. Their love-making had been torrid. It had been sensual. It had been shaming. And it had been absent of any affection. Certainly on his part. So, why on earth would a kiss be a sign of anything? To him anyway. She was the damn fool who had thought it had. Who even now was forced to concede the pleasure it would be to take her hand across his face to assist his understanding of her feelings. The impertinence of the damn man, the stinging ignorance.
“It just is.” She eased the distance between them a whisper. “So there will be none. Not now. Not at all.”
“All right then. Saves time. It means—”
“Rule two.” She saw his eyes freeze as he readied himself to yank off his shirt. She persisted anyway. Why not? In many ways she walked a tightrope here. If she paused it might be to her detriment. “You will be fully dressed at all times.”
“What? How the hell am I meant to—”
“I am sure you will manage. You managed plenty before. But I do not desire to look at your body before, during, or after. Nor in any shape or form wandering about this house in just your breeches. Is that understood?”
He dropped his hands from his shirt and glared, so he must have. “You wanted to look at it plenty before. In fact, it makes my head spin, just how often you—”
True. But that was then. “Rule three.” Clasping her fingers around the cool edge of the dressing table to create another inch of distance, she continued.
“Rule three? You mean there’s more?”
“I will not touch you in any place, intimate or otherwise. I will lie. You will perform.”