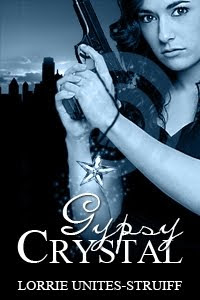 
It’s such a pleasure to appear on your blog. Thank you for hosting me.

You asked if I had to do a lot of studying on gypsies for my novella.

Let me answer the question this way. Other than the study of gypsies, much more research was required other than that of the Romani people. But let me address the Roma first.

There are a lot of wonderful sites and books pertaining to the origins, the beliefs and the lore of the Roma clans. Once I began the research, I found so many interesting facts, so many stories about the culture; I think I became lost for about three days, at least. I was enrapt, held spellbound by all the fascinating material.

Items about how many Roma still live in the U.S.A. today—over a million. How their talents and beliefs are romanticized in movies, TV, and novels. They are stereotyped with gazing into a crystal ball or reading tarot cards and palms. The Roma men are always playing a romantic melody on a violin. Then we jump to the evil curse side or the potions they mix for different ailments. Love potions, bad luck potions, etc.

I found their origins are tied to nature itself. They protect the land, not harm it, and hold nature foremost in their way of life. And it is in their ethnic nature to decipher signs and omens from their surroundings. Oh what spine chilling stories can be garnered from their folklore, like werewolves, vampires, shapeshifters.

For instance, Romanian gypsy villages believe that cemeteries are occupied by werewolves, the natural enemy of the vampire. The werewolves enter the cemeteries for the sole purpose of viciously destroying vampires wherever they find them. It’s believed that because of this, the world of the living people are kept safe from complete takeover of the world by the “world of the dead.”

Who wouldn’t be fascinated with the Roma?

Of course I took liberties with the crystal amulet my main character, Rita, wears in the novella. Er, to be honest, I took many liberties which I’m swearing to, is creative license.

The other research I did involved delving into some police procedure. Rita is a homicide detective in her town of Keyport, PA. She is hunting a serial killer targeting prostitutes.

Then, Rita’s love interest is FBI agent, Matt Boulet. Now this manly hunk comes to us from New Orleans, known for its voodoo. So, I dug into a bit of voodoo to make his background beliefs in the paranormal legit and easier for him to trust Rita and her family’s psychic powers.

So, all in all, the research was quite extensive as it is with any author who needs credibility for a story line. I didn’t use all the information I found while being held entranced, but just enough to clue the readers, bring them into the story for the wild ride, and to make the readers feel like, “Hey, this could happen!”

Homicide Detective Rita Moldova has a secret, a crystal amulet from her Roma bloodline that shows her the last image a victim had seen before they died. Now, a ritual killer is terrorizing her town and the crystal’s magic has suddenly stopped.

FBI agent, Matt Boulet, is sent to lead the task force and gives the group strange orders. Worse, Rita senses he is holding back a deep dark secret about the killer.

When she confronts her seer mother’s advice, she learns another secret about their clan that she finds impossible to swallow.

Rita swims through a whirlpool of confusion as the investigation continues. Can Rita deny the lore of the ancients? Can she deny her growing feelings for Matt Boulet?

Before Rita had time to get her fingers on the gun, the man had shot out of the door, yanked her forward, and somehow shoved her headfirst onto the front seat. She skidded over the vinyl bench seat, her nose and cheek hitting hard, blocking her breath for a moment. Rita yelled; the door slammed shut. She scrambled to sit upright, gagging when she inhaled the dank, moldy scent of the interior. A metal object, hanging from the roof above the mirror, clunked heavy against her head. She swallowed the acrid taste in her throat.

The driver’s door opened and the man slipped inside. One corner of her mind wondered how he could have possibly run around the front of the van so fast.

Rita rubbed her bruised temple and twisted the door handle. It was stuck. She rammed her shoulder into the door. It didn’t budge. The window was up. Her purse with the gun lay on the sidewalk. She worked the lock button and slammed into the door again. The impact sent shock waves down her arm to her fingertips. Shit. The van was rigged. Rita looked at the serial killer, her heart banging against her ribs, her breathing short and shallow. Tapping the mic with frantic fingers, all she could do was pray.

Visit my website to read the reviews and more info

Thank you for stopping in.  It's been a pleasure.

I admit I see the gypsy as a bit of an enigma. But then I look for romance everywhere. I have a Gypsy in my next release, we must think a like, Lorrie.

I've reviewed your book and recommend it as a thoroughly good read.

Oooh, let me know when your next release is out. It will certainly go on my TBB list.
Thanks for the recommendation, Margaret.

Werewolves guarding the graveyards from vampires?! That's a story right there.

I've been a dedicated fan of Lorrie's and have almost read every short story she has out. It was a great treat to get a full length novella!!

Gypsy Crystal is a fast-paced paranormal thriller that ties Romany heritage with a modern day heroine. Lorrie research is evident in the woven details of the gypsy culture that brought a great richness to the story and leading lady.

All your research has served you well, Lorrie. Sounds like Gypsy Crystal's a fantastic read. Congrats!

The paranormal has never been my thing but info about other cultures is my hook. I have to say that with Gypsy Crystal it was a strong one and kept me going to the finish line, loving every sentence. This is a very fine read. Thanks Lorrie.

Lorrie -
Sounds like you have a fabulous book. Can I buy it on Amazon for my kindle? If so, I'm going to download it.
I am so glad to hear about all the research etc. That makes a book much more believable. Thanks.

I really liked the ambiance of the Tea Room and all the Roma traditions you have towards the end of the book. No worries. I won't spoil it for anyone. :)

I also like the individuality of each character from Rita and her Roma family, Anna and Dragus, to her cop family, Della, Sully, Hank and Lipinski. I can hear Matt's accent every time he calls Rita, "Cherie."

Hey Lorrie, I didn't know that werewolves were the natural enemies of vampires. I know that's how it is in Twilight, but I had no idea that it's true. A very interesting tidbit about that and how they guard the cemeteries looking for vampires.

Your research certainly paid off. It must have been hard trying to decide what to use and not to use with all that info.

You did a fantastic job with Gypsy. I love all the characters and it's a book a reader could read over and over again.