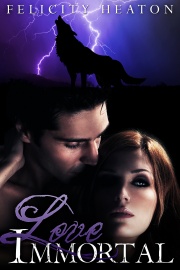 by Felicity Heaton
Rescued from werewolves by the most breathtaking man she's ever seen, Lauren is dragged into the fight of her life and a dark world she never knew existed. There, she discovers that she's the latest reincarnation of a goddess and must drink the blood of her immortal protector, Julian, in order to reawaken and continue her three thousand year old mission to defeat Lycaon, the original werewolf.
With the help of Julian and an organisation of people with supernatural abilities, Lauren fights for her life, their future and the fate of mankind against Lycaon and his deadly army, but can she succeed when Lycaon has killed all of her predecessors?
Can she crack the armour around Julian's heart and seize her happily forever after with him? And can Julian bring himself to trust Lauren with the fragments of his heart after everything he's been through?

My Thoughts:
If you want excitement and fast-paced action with a romance that is bound to make you cry then Love Immortal is what you are looking for. You will meet Lauren, the main character, who is trying to figure out what she wants in life, and who she really is after having a bad year when her parents die in a car accident. After she is attacked by a werewolf, and is saved by a mysterious man named Julian, she feels herself drawn to him, but should be afraid of him! The romance between the two of them will make the coldest of hearts melt! Felicity Heaton does a wonderful job of integrating the mythology of immortals, werewolves and vampires. Fans of these genres will enjoy the ability she drew upon to write this book with so many various “creatures”. Lauren is pulled unknowingly into a dark and chilling world full of supernaturals out to kill her. Thank goodness there is an organization of people with otherworldly abilities who want to protect her! After finding out she is only the latest of many reincarnations of a goddess on a three thousand year old mission to defeat the original werewolf, Lycaon, before he can gain revenge on Zeus and Olympus, Lauren sets out to do just that. This book will draw every last emotion out of you, whether you want it or not! Yes, it’s that good!

I give Love Immortal

Check out more of Felicity at her website: http://www.felicityheaton.co.uk/
Posted by dawnmomoffour at 12:42 PM

Oh this sounds great and exactly like my type of book. Excellent review!