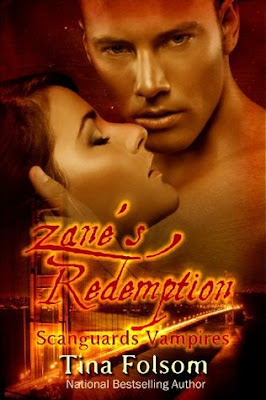 You all know I've been waiting for this book since the second book in the series. It's finally here and I didn't wait one second to go out and buy it! OMG am I glad I didn't wait!

Zane's Redemption by Tina Folsom was another brilliant, and when I say brilliant, I mean BRILLIANT, addition to the Scanguards series!!

Zane is a crazy vampire that has no thoughts about inflicting pain upon people, especially when it's to help his boss at Scanguards where he works as a bodyguard.  After killing a would be rapist, he is punished for his brutality by his boss Samson Woodford, by being placed on a "babysitting" job.

Zane is furious with being placed on such a demeaning job, but knows he cannot live without his family and obides by Samson's terms, including taking a puppy into his home as well. Can big, bad ass Zane be softened by a puppy?

Portia Lewis is a hybrid, half vampire half human, loved and sheltered by her father her entire life. She is about to come into adulthood on her twenty first birthday where her body will stay the same the rest of her life. When her best friend Lauren, also a hybrid, tells her she must lose her virginity before then or be destined to pain over and over again, Portia sets out to do just that.

When Zane meets Portia for the first time, neither of them can deny there is a connection. Zane is not happy about his new charge, or the fact that he'd like to do more than just guard her. As they grow closer, Zane learns of what her father is doing to her, and vows to help her. Breaking all the rules he's vowed to uphold, he whisks Portia away to a private location, and the hunt begins. Samson is pissed that Zane would break a clients trust and begins to use all his resources to find them.

In the meantime, Portia and Zane grow closer, and as she breaks through his walls, his heart starts to soften as they fall in love. After taking her virginity, and don't think for a minute Folsom left out the steamy sex scenes, Portia notices a tattoo on Zane's arm. Unable to control his feelings, he breaks down and tells her of his past, and torture he endured from a concentration camp at the hands of an evil doctor. Over 60 decades he's hunted the men that ruined his life, turned him into a vampire and killed his family. All but one, are dead. Crying for the man she loves and the pain he's endured, Zane can't understand why she's not running away. It's wonderful to see such a hard man be reduced to such softness, to know that he's actually capable of love and I found myself very happy for Zane.

Folsom throws in a surprise twist that I didn't even see coming! I have to say that I now think this is my favorite book of the entire series. It was well written and an OMG I-cannot-put-it-down kind of read. Zane and Portia are such a great fit for each other and it is just phenomenal! I LOVED IT! All of the characters were amazing and I can't wait to see what Folsom brings us next. I highly recommend this book and the entire series! Go get your hands on it, put it on your shelves or on your kindle, because this is one series you won't mind reading over and over again! 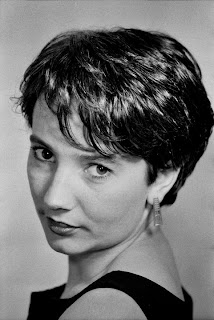 A native of Germany, Tina Folsom immigrated first to England in 1991 and then to the USA in 1999 where she lived in various large cities before she made San Francisco her permanent home.

While writing has always been her passion, the trained CPA knew she had to get a "real" job first. Due to the popularity of her books, Tina was able to quit her day job in February 2010 and now writes full time.

Tina is a member of the San Francisco Romance Writers of America. She also meets regularly with her two critique partners who write historical and paranormal romance.