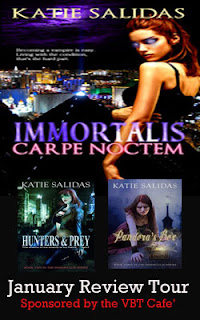 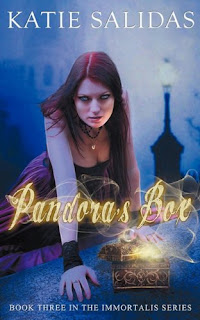 After a few months as a vampire, Alyssa thought she’d learned all she needed to know about the supernatural world. But her confidence is shattered by the delivery of a mysterious package – a Pandora’s Box.
Seemingly innocuous, the box is in reality an ancient prison, generated by a magic more powerful than anyone in her clan has ever known. But what manner of evil could need such force to contain it?
When the box is opened, the sinister creature within is released, and only supernatural blood will satiate its thirst. The clan soon learns how it feels when the hunter becomes the hunted.
Powerless against the ancient evil, the clan flees Las Vegas for Boston, with only a slim hope for salvation. Could Lysander’s old journals hold the key? And what if they don’t?
And how welcome will they be in a city run by a whole different kind of supernatural being?
Werewolves…

This was a great installment to the Immortalis Series. I loved the introduction to a new supernatural species - Werewolves. Salidas did a great job of not over-doing it with this phenomenal breed. Though we still see their strength, they do not overpower the actual plot of this series.

Fallon, Alyssa's best friend from human life, remains a strong character in this book. She maintains her humanity while becoming a first time, mortal member of this clan. I love the interaction between Fallon and Nicholas, the snarkiness kept things humorous and bright. Alyssa still has an inborn need to protect Fallon, but I think Fallon has grown quite a bit and can definitely defend herself.

The entire plot of this title was wonderful. With new elements, and even a few deaths, Salidas has vividly brought us into her world. As we are reminded that curiosity is still a human fault, Fallon and Alyssa open a Pandora's Box that was delivered to Lysander. This brings a whole new form of trouble to this clan. When trying to fight this unknown, they are taken to Boston where we meet a few new vamps and a werewolf pack. We are taken into the wolf way of life, learning that there are more connections between supernatural beings than was ever thought.

While learning the truth of the past, old vamps revisit and sacrifices are made. The ending of this had me reeling, and yes, Miss Katie, A Cliffhanger? Really? LOL. Way to keep your readers yearning for more. I loved it, and the ending is not what you will expect and a complete twist that I've not come across in any other reads in this genre. Overall, I enjoyed this read very much. The tension of the plot was excellent, I just thought  the action that led to it moved just a tad too fast, and I wished it had been drawn out just a smidgen more. I can't wait for book four in this series!

You can find all of the Immortalis Series on Amazon.com or at Written In Blood
Posted by Nightly Cafe at 2:02 AM

Thanks for the opportunity to read this Katie. Can't wait for the next installment :)