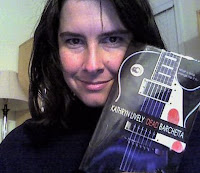 
LE: Thanks for having me, that sounds lovely. I’ll take whatever is strong and smooth. I’m not driving today. 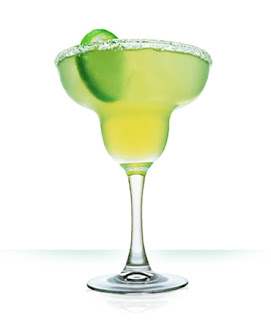 Smooth, strong, and refreshing :). Now that we're all settled in my lair, I'm de-bite-fully glad you stopped in.


BK:  Please tell us a little bit about your current release...


BK:  What inspired this particular novel/book?


When I began writing this work, I had the initial concept in place: two strangers meet at a party and the sparks fly. It wasn’t my intention to write it for ARe, but when Lori James invited me to submit a story to their imprint I thought the timing was perfect. ARe is known for having one of the largest selection of romance and erotica eBooks on the Internet, so I knew I’d find an audience there. So, I pondered the theme of the line and crafted the story.


BK:  When did you first realize you wanted to be a writer?


I knew when I was very young, probably elementary school. I was always writing little, strange stories and articles. All through grade and high school, and on through college, I was always involved in something with a concentration in writing – class papers, literary journals, etc. I’m sure I was born with the desire.


BK:  How do you keep your writing different from all the others that write in this particular genre?


I like to inject a bit of humor in my work. I wouldn’t say that I write romantic comedy, but I find readers like the way I write humorous dialogue. I believe that is one of my stronger points.


BK:  What was the hardest thing about writing this story?


For this story, I’d say the ending. I couldn’t decide whether to deliver an HEA or HFN. It took a while to get the end how I wanted it, so I hope readers won’t be disappointed.


BK:  What character was your favorite to write for in this story? Why?


The lead, Greg, was especially fun to write. He’s sort of a fish out of water in this story, but he catches on quickly. He is written as a fun-loving person who enjoys life, somebody you’d want to come to your party.


BK:  Which was your favorite scene to write?


The beginning scenes of the story were fun. Joining the party with Greg will hopefully give readers his view of a most unusual evening.


BK:  Will this become a series? If so, what inspired it to be a series?


For now, Odd will be a standalone story. I haven’t decided if I will further pursue stories with these characters. I have many sequels for other stories I still need to write!


BK:  Now for a little fun, and into your everyday life, What is a day in your life like?


Very hectic. I still have the day job, so that takes a good chunk of it. When that’s done, I have an hour to myself before picking up the kidlet. We check her homework, then after dinner I settle in my chair and write until bedtime.


BK:  What do you like to do when you're not writing?


I try to read, I don’t do enough of it anymore. I also like spending time with my little girl. Usually we will do something together on weekend, like bowling or shopping.


BK:  What is one thing your readers would be most surprised to learn about you?


BK:  What do you like to read? Who is your favorite author?


I love mysteries, grew up with Nancy Drew. These days, however, I pick up Dick Francis, Carl Hiaasen, and James Ellroy. I also like reading history and biographies.


BK:  Please tell us one piece of advice you were given as an author that you carry with you when you write?


Don’t give up. That’s pretty much all there is to it.


BK:  What are you currently working on?


I have just completed a full-length M/M novel, part of my Dareville series. I plan to revise and self-edit before I start the submission process.


BK:  Where can readers connect with you?


I am mainly on Twitter @LeighEllwood. I don’t auto-follow, but I do respond to DMs and @ responses. I also have a blog at http://leighwantsfood.blogspot.com and the main site at http://www.leighellwood.com. 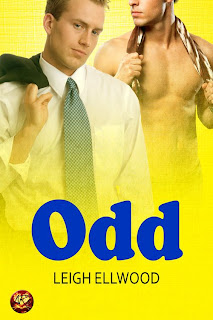 Part of the All Romance eBooks Perfect Strangers series
Greg Hargrove has a ticket to the hottest party in town: Drew Bradley's annual Odd Ball. Dressed for the theme as one half of a popular sitcom duo, Greg doesn't expect to meet his match and engage in a secret night of passion while the festivities rage on. When handsome Rick Wade falls on his radar, however, Greg decides to partake of more explicit party favors. Is Rick more than a one-night stand, though, or can Greg look forward to many passion-filled reruns?
Giveaway - One lucky commenter from Leigh's tour will win a $10 All Romance Ebooks Gift Card, plus reader's choice of 2 downloads from Leigh's backlist (visit her site). So follow...comment...WIN!
Follow Leigh's Tour HERE


In the ten years Drew Bradley hosted his annual Odd Ball, people knew to expect two events: sometime toward the end of the evening Drew would lose his pants, and the two winners of the Best Oscar and Best Felix costume awards would immediately hook up afterward and live happily ever after. That many of the happy couples continued to come to the big party as their chosen television personas stood testament to their host’s impeccable matchmaking—and entertaining—skills.


Greg Hargrove personally didn’t care if either happened on his watch. After years of watching siblings primp and prepare for the biggest bash in town, he’d finally reached the requisite legal drinking age and could now attend. Though he’d never seen the television show that inspired the theme of the party, he’d gleaned enough by living vicariously through older friends—and researching YouTube clips—to know the score.
On November fourteenth, Felix Unger was asked to his leave his apartment. This request came from his wife…


There was more to the prologue, he knew, but in his excitement Greg thought himself fortunate to recall his own name, much less those of characters from a TV show that ceased airing first run episodes long before he was a “glint in the mailman’s eye,” as his brothers liked to tease.


Greg adjusted his Yankees ball cap and smoothed a hand over his three-day-old stubble. It itched like hell, but he wanted to shoot for realism even if he didn’t win the grand costume prize. Would be nice, though, since neither of his older brothers had won before, and Greg had heard Drew didn’t skimp on the goods. Last year’s couple, he’d been told, won matching gold watches.


At the front door of Drew’s McMansion of a home, a wiry, unsmiling man with a long nose looked down at Greg over his John Lennon glasses. “Your invitation?” He held out a pale, almost wrinkleless palm.
“Sure.” Greg surrendered the requisite card given him by his brother Joe, who couldn’t make it this time. Joe hadn’t kidded him when he warned about the exclusivity of the event. What the hell went on here that required protection against crashers?


The butler-bouncer, for lack of a better description, peered down at the invitation for a long moment, as though determining its authenticity. Then, curling it in his bony hand, he addressed Greg. “You may access all designated party rooms with the exception of the VIP area, and you must stay in character. How everyone behaves throughout the evening will determine the final judging for the contest.”


“Got it.” Damn, people sure took this party seriously. At least, going as slovenly Oscar rather than uptight Felix, Greg believed he could blend in easily. Acting like a slob came naturally to him anyway.


“Good.” The man startled Greg with a warm smile that completely softened the landscape of his face. “Enjoy yourself.” 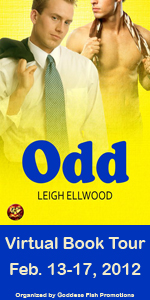 Thank you for hosting Leigh today.

You're welcome. Loved having her.

I had fun following your tour this week good luck with your new book project!

Now, that comment about the ending made me curious...
Good luck with your other projects!
I'm looking forward to that m/m novel :)

Bee Gees lol, now we know your dark secret! lol
Thank you for the tour :)

I love when there's humor or whimsy in a story. I have more difficulty with some of the melodramatic historical romances--they can seem so cheesy. I like a contemporary with some fun in it.

Nothing wrong with the Bee Gees. :-)

Thanks for hosting me this tour.

I've drawn Anzu as this post winner. I'll be in touch. Thanks!