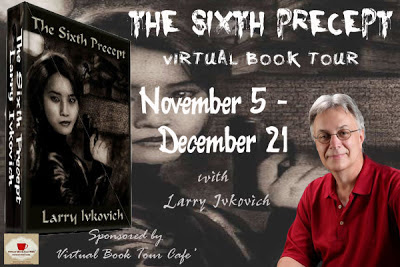 Zar, our Zombie Butler will fetch that for you. Zar…

*Drools* while handing drink over…

*Rolling eyes* You may return to your quarters now. Please don’t mind him, sometimes he just gets so excited when we have guest authors. He’s only ever bitten somebody once, *grins*.

Larry will be offering you a chance to win  a copy of The Sixth Precept, signed and in paperback, so be sure to enter using the Rafflecopter below.

1982. I remember that date vividly because it was when I took my first creative writing course at a local community college and just fell in love with the art. I used to write and draw comic books on scratch pads when I was a kid but really started taking it seriously as an adult.

I had written four short stories featuring the protagonist of my book, THE SIXTH PRECEPT, before I got inspired to write the novel. When I realized I was essentially writing a short story series, I decided to take the plunge for a longer work. I liked my protagonist, Kim Yoshima, a Pittsburgh police officer, and wanted to expand her adventures. I have an interest in medieval Japan and that fit right in with my Japanese-American character. Though I didn’t include any ancient Japanese tropes in the short stories, they became a major source of inspiration for the novel. I incorporated a couple of scenes from the short stories (though changed and rewritten) and added a few new characters. The ancient Japan parts take place during the time referred to in Japanese history as the Muramachi or Warring States Period, which was almost a century of continual warfare among the warlords (daimyo) and the samurai. I felt that was an exciting time to place part of my novel in. It just all followed from there.

I often fight with them. It’s true that they take on a life of their own sometimes! For example, in THE SIXTH PRECEPT, one of my characters, a nameless female Shadow-Tracker (an animal/human hybrid) who was only to play a small role initially, became much more important to the plot as I wrote. It was an interesting development and I’m glad of the final results.

I do use some urban fantasy tropes, of course, like supernatural/mythological creatures existing in our world, an urban or city landscape as the setting and a kick-butt heroine. However, in The SIXTH PRECEPT, I included some science fiction elements (time travel, esper powers, alternate dimensions), horror (the Shadow-Trackers) and even some comic book elements (the Batman-like hero, ArcNight). I call it my “kitchen sink” novel because I have this mix of disparity throughout the story but it flows pretty smoothly and people tell me it all works. I like genre-mixing or mashups.

Kim Yoshima. I feel like I’m able to write from a female perspective pretty well and Kim was actually easy for me to write on the whole. She’s smart, strong-willed, independent, giving and tolerant. She’s not perfect, however, possessing flaws like all of us—being a workaholic and keeping most people at a distant, among others. But that’s what makes her so interesting, warts and all. Plus, if I was in trouble, I’d want her on my side!

Chapter 9, which takes place in 2010 Pittsburgh where Kim encounters a Shadow-Tracker for the first time. It’s starts out slowly, introducing the hybrid from his own POV and then showing Kim and her friend, Lazo Sibulovich, discussing ancient Japan and Kim’s ancestry but then becomes an action-packed thriller with the Shadow-Tracker attacking a very freaked-out Kim. I enjoy “monster-on-the-loose” stories so it was fun tapping into that interest for this chapter.

Kim again. Not because she’s female and gorgeous either! J She’s a very resourceful person with experience in all manner of strange situations so I think she’d be a perfect choice to get us back to civilization. The survivors on the television show “Lost” could have used her. As far as the must-have—a crate full of books. I couldn’t get by without reading.

My officer is small, actually being one of the two spare bedrooms of our house (the second is my wife’s office). It’s got book cases with still many unread books lining the shelves, a reading chair (which has been taken over by our cats), a small table and my desk and PC. I’ve got a couple of framed Michael Whelan posters hanging on the wall—he’s my favorite fantastic artist. The office is usually pretty messy and unorganized but, honestly, for the most part I don’t know how to work any other way. I don’t necessarily need silence to write. When I caught the bus to work everyday a few years ago, I’d write on my HP Mini netbook with no problem, despite the noise and conversation. But, I’d rather have the quiet.

Reading, watching movies, beer tastings, getting together with friends, going for walks with my wife.

I used to play the accordion when I was a kid and was in a thirty-piece accordion band. We won first prize in a music festival for our rendition of “The William Tell Overture.” I’m not kidding.

I wrote a very, very short story titled “Her Fiend-Like Appendages” where my alien characters just spouted complete gibberish. It was fun to write but nobody liked it.

Keep trying! If you get a rejection from one market, send it out immediately to the next one. Perseverance does pay off.

I have a second book coming out next year from IFWG Publishing. It’s called MAGUS STAR RISING and is a futuristic science fiction novel. I’m currently working on the sequel to THE SIXTH PRECEPT. 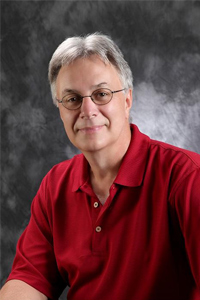 Larry Ivkovich is an IT professional and the author of several science fiction, fantasy and horror short stories and novellas, published online and in various print publications and anthologies including M-Brane SF, Afterburn SF, Penumbra, Twisted Cat Tales, Abaculus III, Raw Terror, Triangulations, Shelter of Daylight and SQ Magazine. He has also been a finalist in the L. Ron Hubbard’s Writers of the Future contest and was the 2010 recipient of the CZP/Rannu Fund Award for fiction. His debut urban fantasy novel, THE SIXTH PRECEPT, is now available from IFWG Publishing, Amazon.com and Barnesandnoble.com. He is a member of two local writing/critique groups, the Pittsburgh Southwrites and the Pittsburgh Worldrights, and lives in Coraopolis, PA with his wife Martha and cats Trixie and Milo.
Website | Facebook 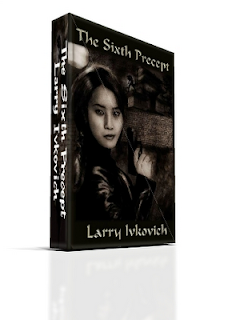 Genre – Urban Fantasy
Publisher – IFWG Publishing
Release Date – November, 2011
Amazon | BarnesandNoble | IFWG Publishing
Blurb:
The Sixth Precept In 16th century medieval Japan, Yoshima Mitsu, who is gifted with psychic powers, uses her prescient abilities to send her young attendant, Shioko, into the future. There, Mitsu believes Shioko will be safe from the purges of the maniacal warlord Omori Kadanamora, his warrior monks and his half-human, half-bestial Shadow-Trackers. In present-day Pittsburgh, police Lieutenant Kim Yoshima is attacked by a creature out of someone’s twisted nightmare. In the aftermath of that terrifying struggle, Kim finds a young Japanese girl named Shioko, lost, confused and calling Kim “Mitsu” and her monstrous attacker a “Shadow-Tracker.” Wayne Brewster dreams of the costumed hero, ArcNight. But more than that, he feels bizarrely connected to the fictional crime fighter as if ArcNight and his comic book world are real. And in all of his dreams, Brewster sees one constant, one face repeated over and over--the face of Kim Yoshima. Empowered by a mysterious book, The Five Precepts to Enlightenment, Kim realizes her destiny is in the past. Using her own burgeoning esper powers, Kim, accompanied by Shioko and Brewster, travel by means of a temporal rift to feudal Japan. There they must assume different personas to fight Omori and creatures of Japan’s mythological world to fulfill ancient prophesy and modern historical fact. If they fail, history will be altered and the world will change forever. 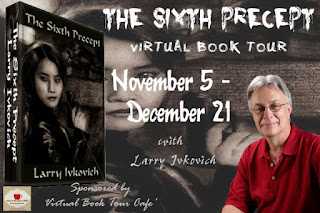 Great to learn more about you.

Thanks, Rebecca. The tour has been a real educational experience for me also! I'm really enjoying it. Thanks to BK for hosting me.