Interview & Giveaway: Poison in the Blood by Robyn Bachar

RB: Witches brew sounds intriguing. I’ll have one of those, please.

RB: I see the pine tree in my neighbor’s front yard. At least I think it’s a pine tree. It’s an evergreen of some sort.

RB: I like to think of it as organized chaos. I have stacks of papers and junk mail, but I know where everything is.

RB: Coffee is essential to life. I usually write on my laptop (it’s pink!), because my handwriting is not so legible.

RB: I need to have noise in order to work. Music is helpful as long as it doesn’t have lyrics (I have a film score Pandora channel for this reason). Usually I write with the TV on and a show in the background. I’ve written a few books to episodes of Ghost Hunters.

RB: Emily Black, her husband Michael, and his mentor Simon St. Jerome first appeared as vampires in my book Blood, Smoke and Mirrors. They completely stole every scene they were in. I wanted to go back and tell the story of how Michael and Emily fell in love and became vampires, and The Importance of Being Emily and Poison in the Blood were born. (Both books are included in the print edition of Poison in the Blood, so it’s two books in one.)

RB: I skip it and come back to it later. I leave a placeholder for the problem scene in brackets, like [fight scene here]. If a character is being difficult I try to stop and figure out what their Goal/Motivation/Conflict is. Once I know what they want and why it’s easier to figure out how to give it to them (or take it away if I’m being mean).

RB: My path to publication began with the 2006 National Novel Writing Month. It was my first attempt since high school to write novel-length fiction, and it eventually became Blood, Smoke and Mirrors. Poison in the Blood was my 2011 NaNoWriMo novel. I’m a big NaNo fan, and I try to participate every year.

RB: In seventh grade I was second place in an All-American Girl competition.

Night Owl or Early Bird? Night Owl. I don’t do well before the crack of noon.

Fantasy or Mystery? Both! A wizard did it!

Pen/Paper or Computer? Depends on the context. D&D is better with pen, paper and 20-sided dice.

Chocolate or Vanilla? Swirled, in a waffle cone with sprinkles, please. 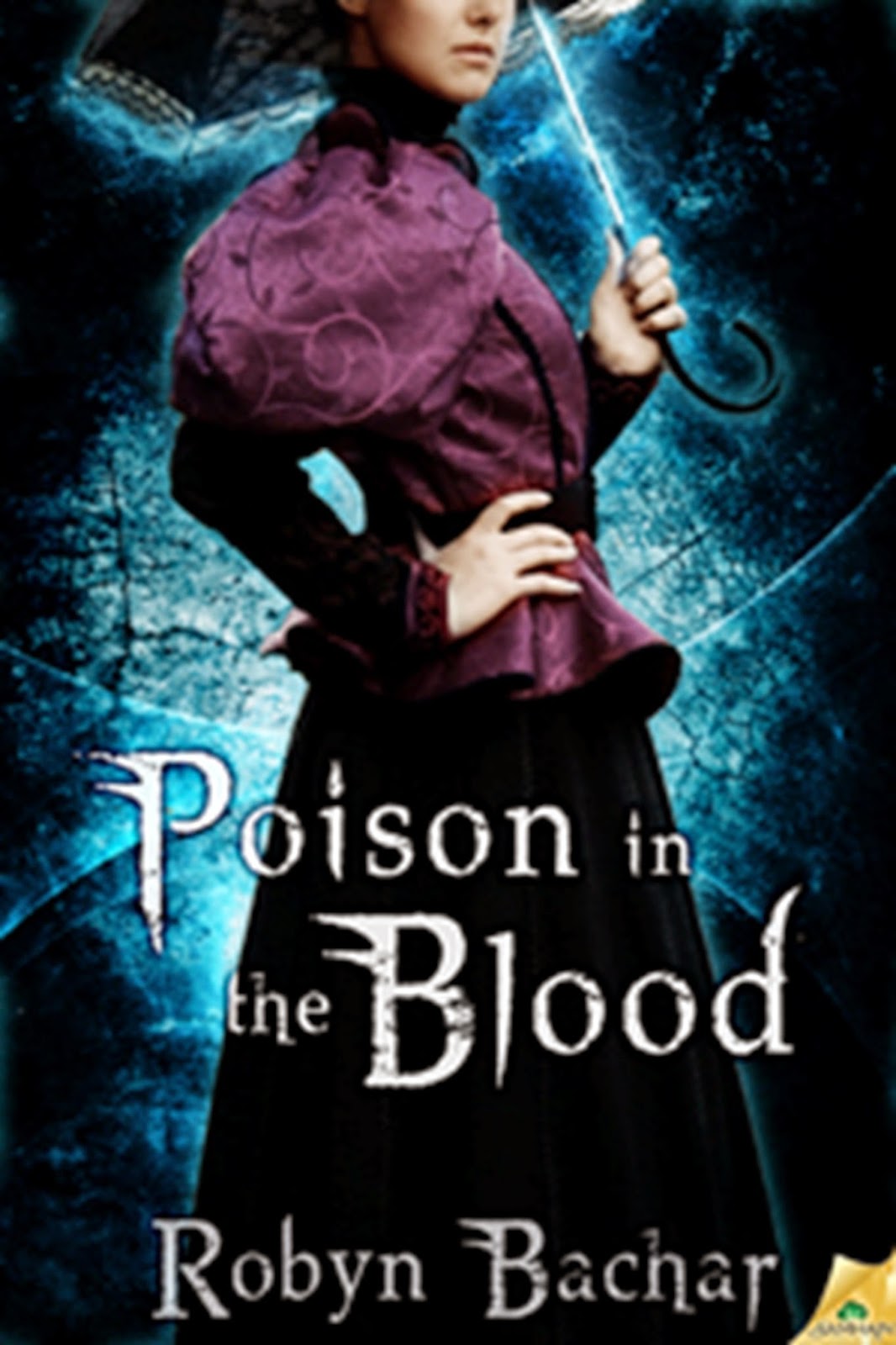 She is honey to his throat…but one sweet taste could part them forever…
Banished from home while her husband adjusts to life as an immortal, blood-drinking chronicler, Emily Black is homesick, heartsick and struggling under the constant sensory barrage of a city drenched in ancient magic. When an old friend asks for her aid in solving a string of murders, she welcomes the distraction, despite the danger.

Justine Dubois is grateful for a seer’s help, and more understanding than anyone of Emily’s plight. As a guardian, Justine commands respect; as a woman, her magic is considered inferior. Together, they are determined to prove their worth to London’s magicians, starting with solving these murders—with maybe a bit of matchmaking on the side.

Long before he met his soul mate, Michael Black made a commitment to join the Order of St. Jerome. He will live forever, forced to watch the woman he loves age and die. As Emily hunts the murderer, Michael struggles to protect her. But if he loses control of his hunger, the greatest threat to her safety could be Michael himself.

Readers can receive 30% off the ebook of Poison in the Blood from the Samhain Store by using the coupon code POISON14 at checkout.

Normally stepping into a garden would soothe me, but we were still within London, where there was no comfort whatsoever. I looked up at the night sky and wished I were with Michael.
“You have the soul of an artist, Miss Rose. It is a rare gift.” Mr. Paris stroked my hand, and I tugged it free of his arm. I folded both hands before me primly and smiled.
“Again, that is very kind of you.”
“I consider myself a patron of the arts.”
“So you attend gatherings such as this often?” I asked.
“Of course. I am always on the lookout for new talent.”
“I see. Did you know Mrs. Harding?” I tried to examine his aura to determine his reaction, but his magic continued to be so overwhelming that my eyes watered. Mr. Paris must be unspeakably powerful, and I found myself both worried and intrigued. Perhaps he was a sorcerer? One who specialized in darkness?
“I did. Poor girl. What a terrible thing to have happened to her and her family… Tell me, are you working on a second collection of your work?” he asked, quickly changing the subject.
“I am, though I am afraid the subject matter is quite a bit darker.”
Mr. Paris smiled a predatory grin, and my pulse leapt with a thrill of fear. “I am not afraid of the dark, Miss Rose. Are you?”
He stepped closer, but I held my ground, studying him with a curious tilt to my head. “What are you?” I asked.
He blinked, startled. “I beg your pardon?”
“What sort of magic do you practice?” I clarified.
“Oh. I am a librarian, of course,” he replied, and I laughed, unable to help myself. “What’s so funny?”
“You are most certainly not a librarian. Do people truly believe that lie?”
The smile slid from Mr. Paris’s face as his expression hardened. He stepped forward and tried to grab my arm, but Miss Dubois was suddenly between us, a shining silver blur. With a snarl he turned and ran, and the guardian chased him out of the garden and into the street.
Uncertain of what to do, I followed. I stood hesitant at the garden gate, wondering which way they went. My vision shifted, and I followed Miss Dubois’s blazing footsteps. I paused next to a blur traced over the high brick wall of another garden. It was another magical doorway, rather like the one I had discovered near Mrs. Harding’s body outside the Undiscovered Country. Foolishly I raised my hand to touch it, despite knowing full well that doing so could trigger another vision, but a hand emerged from the brick wall and grabbed my wrist.
Overwhelmed with shock, I barely managed a strangled gasp as Mr. Paris stepped through the wall and glared down at me. “Who are you?” he demanded.
“You first.” My voice trembled, and Mr. Paris grinned. He tightened his grip and snapped several small bones in my wrist, and I screamed.
“Who are you?” he repeated.
Something bubbled up within me, a bright plume of prophetic magic that became my answer. “I am your end.” That time my voice did not tremble at all, but was filled with terrible certainty. I would cause Mr. Paris’s death, and I knew it with as much confidence as I knew the sun would rise in the morning.
Something in my gaze must have worried him, because he snarled. Scowling, he grabbed my forearm with both hands and twisted. The bone snapped like dry kindling, and I screamed again. Before he could torment me further Miss Dubois arrived and bashed him with a round silver shield. Mr. Paris vanished into thin air, and the guardian stood near me. One arm bore the shield, while in her other hand she held a sword. How cunning of her. I wanted a sword as well.
“Are you all right?” she asked.
My knees wobbled and began to buckle, but then two dark blurs streaked up to us, and I was suddenly swept from my feet and cradled close in Michael’s arms.
“Darling! What happened?” he asked.
“You caught me.” I blinked—however had he moved that fast? Simon sighed and shook his head at his student, and I sensed that Michael and I were both in for a scolding.
“Of course I did. I will always catch you. Are you all right?” 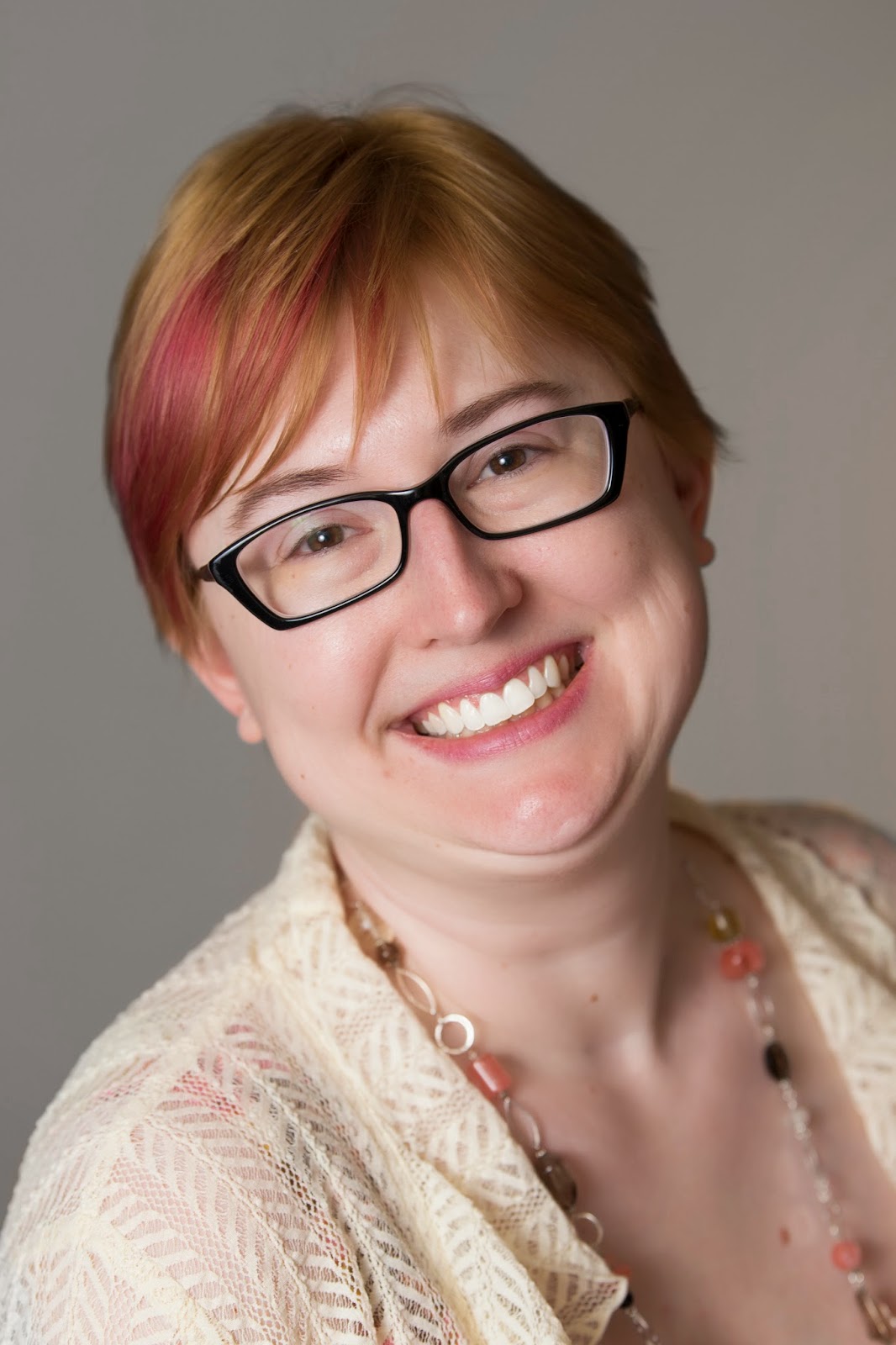 Robyn Bachar was born and raised in Berwyn, Illinois, and loves all things related to Chicago, from the Cubs to the pizza. It seemed only natural to combine it with her love of fantasy, and tell stories of witches and vampires in the Chicagoland area. As a gamer, Robyn has spent many hours rolling dice, playing rock-paper-scissors and slaying creatures in MMPORGs. 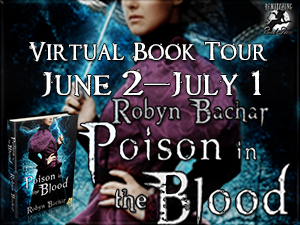 1 signed print copy of Poison in the Blood

Thanks for having me today! :) I'll enjoy the witches brew.