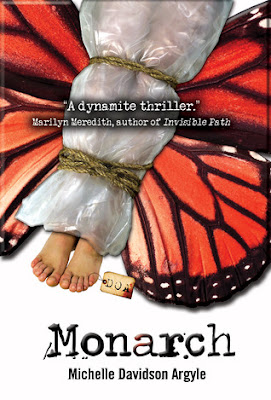 Monarch by Michelle Davidson Argyle is one of those stay up all night because you can't put it down reads - which is exactly what I did.

Lillian is an emotional woman holding the past close to her heart. When Nick steps back into her life, the past comes flooding back like a broken dam bringing danger and mixed feelings with it.

Nick is on the run, accused of murder. As he sets out to prove his innocence, running to the only place he thinks is safe, Lillian not only provides a safe haven for his girls who also are in danger from his past, but for his heart as well.

Nick was on assignment when Kyle, who he thought he could trust, turns on him. Wanting the power from Ferriera's Cartel, Kyle kills who he thought was Ferriera's wife, Catarina, and places the blame on Nick. Now that Nick has gone back to Brazil to clear his name, obtaining pertinent information froM Catarina against her husband, Kyle must make sure the information to clear his name doesn't make it back to the CIA. Catarina's motive, keeping her son Alex from growing up like his father, Nick's motive, proving his innocence to move on with his life, to love freely and live happily ever after.

Argyle did such a fantastic job with this story. The Monarch butterflies was a brilliant addition to this thriller, and jumping from the past to the present to let us know Nick's backstory and what is currently happening was so effectively written, I never got lost at any point.  Argyle's writing style is just phenomenal.

I loved Nick from the get-go. He is strong and silent, holding many secrets as the turmoil within him of wanting to tell all was played out.

Lillian is very emotional, trying to deal with the past and the present, realizing that Nick is all she wants.

Devan is strong and protective of his mother, all the while wishing happiness for all.

I didn't have any problem connecting with any of these characters, and the plot was so good that you could not put it down until you found out how it all ended. Kudos to Argyle for such a great story and I am so glad I had a chance to review her work with Monarch. I can't wait to see more from her and I gladly give Monarch five flaming roses. 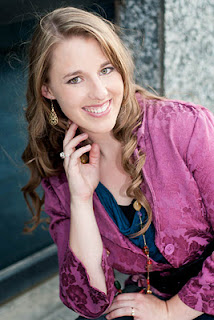 Michelle is a mother, artist, and writer who lives in the Rocky Mountains with her sword-wielding husband and energetic daughter. She writes contemporary, literary, and fantasy fiction. Cinders and Monarch are two of her published novels. The Breakaway will be released in 2012 by Rhemalda Publishing, and Bonded (which includes Cinders)will be released in 2013 by Rhemalda Publishing, as well.

A Little More Info
Michelle graduated from Utah Valley University with a Bachelor's Degree in English/Creative Writing in 2002. Her short fiction has been published in the University of New Mexico's national literary journal, Scribendi, 2002, the Rose & Thorn Journal, 2010, Suspense Magazine, June 2011, andStories for Sendai Anthology, 2011. She served as the editor-in-chief of Utah Valley University's literary magazine and has won awards for her short stories. She is also an editor/publisher of “The Literary Lab Presents…” series of anthologies.


Find Michelle online at her Website to learn more


Purchase Monarch at Amazon
Posted by Nightly Cafe at 3:16 PM

Flaming roses. What a cool rating system! I agree that MONARCH was a captivating read. Thanks for the insightful review!

Join me in the Trick or Treat Spooktacular! Could you help make the Grand Prize a brand new Kindle Touch?