I'm a day behind on this as with all the rain we've been having and my house is so old I've run into some major technical difficulties. We've been without TV, internet and I'm still without phone. Living in the hills haha. I'm very happy to have Michael Barclay as my guest today though, and his book Hill 170 is a fantastic read. Michael was awesome to give you a chance to win an e-copy of Hill 170 and this is one book that you will be glad to read. 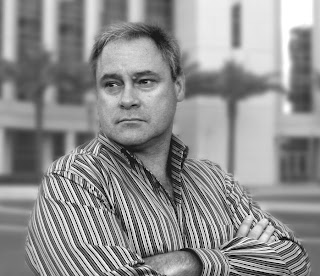 Having received two Presidential Commendations while serving in USAF intelligence in the Far East puts him in the perfect position to pull readers into the tension-filled world of clandestine work. He earned my BA in East Asian Studies at George Washington University.
He has an extensive background in freelance writing, articles dealing primarily in technical topics such as economics, geopolitics and computers. He has also co-written several technical software manuals and one retail How To-esque guide (published by Sam’s) for Motion Graphics. HILL 170 is his first novel.
The ‘whatever else’ is what he'd like time to consider. With the release of HILL 170 he has been very focused on getting the ‘description’ as tight as possible - He's been thinking ‘compact’. For ‘whatever else’ he needs to reverse that and think ‘expand’. Being (a bit of) a perfectionist, he'd hate to dash something off. 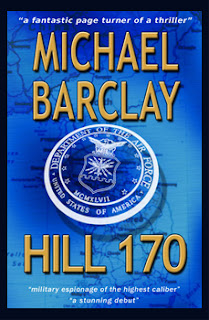 China, North Korea, South Korea and the United States – the major forces in the world’s most dangerous stand off.
Sergeant Dodge Bryce and the small team of USAF intelligence ops on Hill 170 keep the region safe. But who will keep them safe when a shocking incident costs the group fully one third of their number – overnight?
Now gravely short handed, the Hill faces its ultimate worst case
scenario – a PRC spy in their midst. And Bryce, his remarkable string of intel discoveries having cost the PRC too much, is now the #1 target of China’s master assassin.
It’s a race against the clock as East and West square off in a
chillingly authentic story of defections, betrayals and clandestine
intelligence operations that you will never forget.
My Review:
Hill 170 by Michael Barclay


I always love a book that is based on real life experiences. Those always make the best reads and this is a great read. Having the military lingo was really cool and makes you see just how it is when men and women are in the service and what they may have to go through. Though I've never really read a military thriller before, I have to say that Barclay has definitely not turned me away to be open to read more.


From the very first page, as your thrown right into a dramatic scene you will find yourself turning the pages to see what happens next. I was literally on the edge of my seat at times. From spies to murder, this couldn't have been a written any better. Character development was fantastic, and I could vividly see the plot laid before me. Barclay is a fantastic writer that captures the reader's interest and I can't wait to see more from him. I give Hill 170 4 Flaming Roses.

If you would like to win a copy of Hill 170, simply leave a comment for Michael with your email address. If you have a military experience that sticks in your mind, share that with him as well. Contest will run until next Thursday and I will announce the winner on Friday, October 14.


Want to win a Kindle? You're in luck because Mr. Barclay is also offering a Kindle of choice while he's on tour. Just check out the details below to learn how you can enter to win.

HILL 170 is giving away a Kindle and the Winner gets to choose!

Kindle 3G, Free 3G + Wi-Fi, 3G Works Globally, Graphite, 6″ Display with New E Ink Pearl Technology – includes Special Offers & Sponsored Screensavers
or
Kindle, Wi-Fi, 6″ E Ink Pearl Display
Either = $139 value
Kindle is Amazon’s #1 best seller and has the most 5-star reviews of any product on Amazon.
The HILL 170 Kindle Giveaway Official Rules
1. Buy the book at Amazon – http://www.amazon.com/dp/B004YDQORC
2. (choose one)
A. Forward a copy of your Amazon purchase receipt to hill170kindle@gmail.com
B. Send a screen capture of your Amazon purchase receipt to hill170kindle@gmail.com
3. One entry per purchase.
4. Entries must be in by October 15th 2011.
5. Drawing will be held October 25th 2011. The winner will be announced on Hill170.com October 26th 2011.
The fine print: The actual prize is a $139 gift credit at Amazon. The winner may use this amount for any item(s) sold on Amazon. Void where prohibited.
Posted by Nightly Cafe at 11:23 AM

The book sounds very good, I checked it out at amazon and I see good reviews too! This is something I could share with my husband and son also, this book is more up their alley than mine, but I never turn down a good read. I will def be checking it out, thanks!

I don't have any military background, my son wanted to get into the airforce right out of school, but he has several bolts and pins in his leg and they wouldn't take him. I have heard some good stories from his friends who have come home on leave tho. But those I wont repeat!! :)