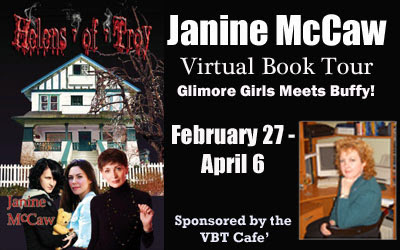 Today, Janine McCaw is joining me at the round table. I'm so excited as this book looks phenomenal, Gilmore Girls meets Buffy? Who wouldn't be intrigued by that? Yea, I know! I'm loving it! Janine is also kind enough to offer not one, but TEN ebook copies to TEN lucky winners today. She has even offered a bonus 11th ecopy if a "Helen" comments to win! How cool is that?  So be sure to leave Janine a comment and don't forget your email address so we have a way to contact you should you win. Want an extra entry? Well duh! Who wouldnt? All you have to do is share the post, facebook it, or tweet it and leave an extra comment that you did so and there you go! You have extra entries! Each comment is numbered so please leave a separate comment for each task. Winners will be drawn using Random.org and announced next Thursday - yup, so there's plenty of time to get your entries in :). You don't have to follow the blog, but it would be awesome to have you.

Now without further ado, I bring you Author Janine McCaw!


BK:  Please tell us a little bit about your current release...

Helens-of-Troy is the story of three “Helens”, 15 year old “Goth Chic” Ellie, her mother Helen and her hottie of a grandmother, Helena. Children are being murdered in their small town of Troy, and the three women have an unusual connection to the crimes.

I love the paranormal. The title came to me first. I was reading about the Helen of Troy we all know, and I thought, what if there were three of them. And what if they were kick-ass demon fighters?

I talked to imaginary people a lot as a child. I think it started then.


I used to do the same thing, the voices in my head lol.

The Helens definitely are multi-dimensional. They’re funny, but show their serious side when they need to.

The characters kept trying to take over. I didn’t want it to become all about the teenagers. Remember the original 90210? There were parents in the beginning, and then they kind of disappeared. I didn’t want this to happen to the Helens.

Helena LaRose. She’s not quite ready to admit she’s as old as she is, and being 51, I can really relate to that.

I liked Ellie and Gaspar BonVillaine’s scenes together because Gaspar was such a psycho. Here’s a teenaged girl chained up with a nutcase, and she’s got to try to keep it all together.

Yes, I am working on the second installment, Helens-of-Troy: Nightmare on Jacey Street now, and have at least a third installment planned. Horror happens around the holidays for the “Helens” and luckily there are a bunch of them.

Normally it’s quite together, but lately my job has had a tendency to take over all my free time. The juggling act I thought I was so masterful at is tumbling down around me. But it will get better.

I love photography. I’ve also take up bike riding again. It’s true, you never do forget how to ride one, but it hurts more these days.


I too love photography and any art really. We have much in common. I hear about being sore. I felt it after riding with a new dog we had, he needed vigorous exercise or he got nippy. We're no spring chickens anymore haha.

I really wanted to be a hockey player, but the NHL isn’t big on women.

I like to read biographies and mysteries and stories that let me escape. I’m not so big on romance novels. I read a lot of Janet Evanovitch.

Don’t let anyone tell you that you can’t do it. Start with small pieces and work your way on up.

Aside from additional installments in the “Helens” series, I’m also working on “The Inn at Hazy Waters” kind of a Fantasy Island meets 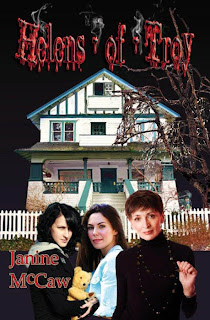 Fifteen year old Goth-chic Ellie has a lot of explaining to do. She’s just moved to the small town of Troy, fought with her uptight mother Helen, met the boy of her dreams and found a dead body on her sexy “new-age” grandmother Helena’s porch. All on the first night!
But Ellie’s not alone. Helen is hiding something. Helen knows all about the kind of eerie dreams her daughter is having — the dreams that show the whereabouts of the missing children of Troy — because she’s had them herself. But she’ll never admit it. Not while Ellie’s sex-crazed friend Ryan is safely behind bars for the murders. Helen knows what it’s like to be attracted to dangerous men.
Then there’s the little matter between Helena and Gaspar Bonvillaine, the teenaged vampire who is learning to feed on young prey. Now that he’s caught Ellie, he doesn’t know whether he wants to kill her or turn her to the dark side and keep her forever. Helena should have finished him off when she had the chance.
To survive the vampire feeding frenzy surrounding them, mom Helen needs to come to terms with her own insecurities and deal with the gifts she has. Helena must learn to ground herself for the good of mankind and more importantly her own family. And Ellie has the toughest choice of all. Ellie must decide whether its time to let her own childhood go and become the woman she is destined to be, one of the ageless and timeless “Helens of Troy”.

Helena LaRose dragged the body out of the house and rolled it up and across the canopied swing on her front porch. First went the feet, then the torso. By the time she got to its flailing head, the rules of motion took over, and the corpse moved itself. Its weight caused the creaky three-seater bench with the weathered cushions to rock, hitting Helena straight in the kneecaps as it swung forward.

“Easy there, Sport,” she said, reaching forward and slowing the swing to a halt. “There will be no swingers on the porch tonight. I’ve got a reputation to maintain.” If the corpse was trying to get one more kick at her, it would have to do better than that.

Taking a step back to observe her handiwork, Helena knew that something wasn’t quite right in Deadville. “I should have thought more about this,” she said to herself, struggling to prop the body upright. “He’s just not a looker.” His lifeless arms flopped around her, hitting her in the head. “Son of a bitch,” she sighed.

She brushed back a strand of dark hair that had fallen in front of her eyes, and put her hands on her hips in exasperation. Moving cadavers around had certainly been a lot easier when she was younger.

“Do you need some help there, Helena?” asked the old man who had been silently viewing the entire scene from the sidewalk. “I don’t think he’s obeying the laws of physics. I’m pretty sure dead weight isn’t supposed to move around.”
She jumped. There was nothing worse than being caught in the act. She had hoped to keep things undercover a little longer. Timing never had been her thing.

She turned and gave her neighbor a wary smile. “I’m afraid you’re going to have to sit in the rocker today, Mr. Wagner. I know you’d prefer to stretch out on the swing for a bit of a rest on your afternoon walk, but it’s occupied at the moment.”

“So I see,” Mr. Wagner said, taking it all in stride. He sat down in the pine rocking chair next to his usual spot. “I guess I could break from my routine just for today.”

Mr. Wagner glanced at the body and pouted. “You’ve covered him with my blanket. The one you always give me to use. Do you think you can get me another one? I’d take it from him, but there’s just something unsettling about using a blanket that has covered a dead guy.”

“I’ve got another blanket ready for you, Mr. Wagner. It’s in the front hall. Cotton. I know wool makes you itch. The newspaper is there, too. I’ll get them both for you.”

“Don’t get old, Helena,” he sighed. “It’s a bitch. Stay young and beautiful like you are.”

Helena laughed. At fifty-eight, she was hardly young, but there was some kind of ageless beauty about her that was hard to dismiss.

“Young is a relative thing, but thanks, Mr. Wagner. How about I put the kettle on for us while I’m inside?”
“Can I have regular orange pekoe today?” he pleaded. “None of that herbal stuff?”

“Do you really think you should, Mr. Wagner? The anti-oxidant level is so much higher in the rooibos I blended for you.”

“Helena, stop being the naturopath that you are and give an old man a decent cup of tea. I’ll sign a waiver if you like. I rely on a little caffeine to keep my eighty-three year old heart pumping. I like coffee in the morning, tea in the afternoon and a stiff shot of scotch at night. Write that down in case your doctor books don’t cover the real secret to a long life.”

“That won’t be necessary, Mr. Wagner,” she laughed. “Just don’t let it get around. It’s bad for my business. I spend a lot of time telling my clients that peppermint tea is the elixir of life. You’re right though, peppermint schnapps may be closer to the truth.”

Thanks for stopping in and chatting Janine! So much fun and I wish you much success in the future! 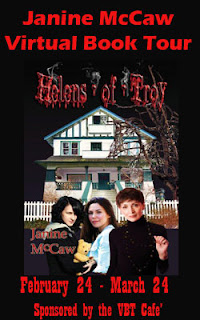 Thanks for stopping in Janine! It was so much fun :)

You had me at Gilmore Girls meet Buffy..:) Sounds like an awesome read!! :)