Welcome to Immortality and Beyond. May I offer you a beverage?
Lori: I’ll take a Newcastle Brown Ale if you have one! 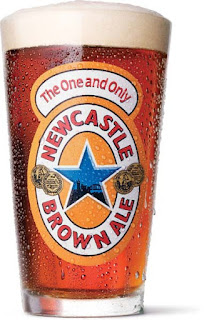 Now that we're all settled in my lair, I'm de-bite-fully glad you stopped in.
BK:  Please tell us a little bit about your current release...
Soul Seduction is a wild and dark tale about a demon slayer who moves to England after losing her mentor. After settling in, she meets her hot neighbor, Luke. Slayers are only supposed to mate with each other, so her instant attraction to Luke is startling but she can’t seem to push him away for good.
BK:  What inspired this particular novel/book?
I love reading paranormal so the jump to UF wasn’t a long one. But I have a hard time finding erotic UF, with the emphasis on erotic. So I wrote one.
BK:  When did you first realize you wanted to be a writer?
I was in sixth grade and my teacher asked us to write a story about our vacation. Well, I didn’t realize the project was supposed to be true and my imagination took flight. My teacher believed every word of it and commented how wonderful my grandmother was.
BK:  How do you keep your writing different from all the others that write in this particular genre?
I really love Liverpool so when choosing the setting, it wasn’t hard to decide the backdrop. So my setting and culture definitely keeps my book fresh because I do try to stay true to the city Luke loves so much.
BK:  What was the hardest thing about writing this story?
Keeping Ashlee a virgin. She really wanted Luke and resisting her was nearly impossible for her.
BK:  What character was your favorite to write for in this story? Why?
I love Terrence. He was so adorable and quirky. Terry is Ashlee’s new slayer’s mentor, who guides her through the rough parts of slaying. Back in the day, he was a librarian but now he’s a sex toy shop owner with his partner.
BK:  Which was your favorite scene to write?
I have so many. I loved the scene where Luke invites Ashlee in for tea, when he’s interested in her at first. There are so many cute one liners in that scene, as their flirtations get out of control.
BK:  Will this become a series? If so, what inspired it to be a series?
Oh yes, this book is definitely the first in a series but all the books do stand alone. I’m about half way done with the second book but my next release popped up for edits. That one is coming out 4/24.
BK:  Now for a little fun, and into your everyday life, What is a day in your life like?
Busy. I’m a CEO for my family business. My day usually involves running around putting out fires, ordering supplies, etc.
BK:  What do you like to do when you're not writing?
Sleep, eat, breathe and read. I also do enjoy my job but it cuts into my writing time. :)
BK:  What is one thing your readers would be most surprised to learn about you?
I have no idea. I’m kind of an open book, no pun intended.
BK:  What do you like to read? Who is your favorite author?
I like to read anything. Short, long, funny, sad, as long as there are no zombies, I’d love to read it.
BK:  Please tell us one piece of advice you were given as an author that you carry with you when you write?
Don’t ever stop writing. I think I’ll write until the day I die.
BK:  What is one piece of advice you can give to aspiring writers/authors?
Don’t stop writing. LOL! Also don’t believe everything in the industry you hear. I’ve heard editors aren’t buying books in the genre I just sold in.
BK:  What are you currently working on?
The sequel to Soul Seduction (YAY!) I’m also working on a sequel to my upcoming release The Long Con, a m/m suspense about another hot British boy.
BK:  Where can readers connect with you?
I’m on Twitter: loritoland and of course you can always stop my website, which doubles as my blog too. I post lots of pictures of my furchildren there and they are always looking to have their egos stroked.
Lori will be giving away the winner's choice of a $25 GC to either Amazon, AllRomanceEbooks or Loose Id for both blog host with most comments and one randomly drawn commenter during the tour  You can follow Lori's tour HERE for more chances to win. 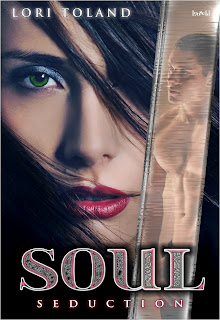 Ashlee Bennett has her priorities straight. Fighting demons is at the top of the list until she meets her sexy neighbor, Luke Byrne. Even though he is human, she can't stop dreaming about his buff body and sexy grin, until her dreams turn to nightmares.

Her world is turned upside down when Luke follows her one night but instead of being afraid, he is only more determined to stand beside her and fight. Ashlee knows she needs to keep her distance from Luke, not just to protect her virginity but her heart as well. But Luke may be the only one who can save her from the night, and her dreams.
Excerpt:
“I can’t just leave,” I protested as the cool evening air hit me. “I came with a friend.”
He rounded on me, and I nearly ran into him. “You mean your boyfriend? Do you want to stay with him? Just say the word, Ash.”
The possessive tone in his voice ticked me off. “What the hell, Luke? I don’t even know you, and you’re acting like you fucking own me.” But even as I said the words, I wanted him to grab me, hold me, and take me however he wanted. My lust for him clouded my ability to say no.
“Ash,” he said gruffly, “all I think about is having you.” He moved forward as he spoke, and I stepped backward, keeping my distance until my back met a wall. I knew my control around him was shot to hell, and I couldn’t trust myself. He snaked his hand into my hair and roughly grabbed the strands. He angled my head so I couldn’t look away. If I were able to breathe, I would have hyperventilated.
“Don’t.” My plea sounded weak, and I doubted he even heard me.
“I can’t help myself,” he said and kissed me gently. It was the lightest of pressure on my lips, until he coaxed them apart. When my tongue met his, I was tentative at first, but Luke took charge and claimed my mouth.
I was strong enough to pull away, to tell him no and kick him in the nuts if he didn’t stop. But I didn’t want to. I let myself drown in his kisses. I was so wrapped up in what he was doing to me with his mouth, I barely noticed he had lifted me up and held me against the concrete wall.
He settled his hips between my legs and rocked them, pressing his cock against my clit. The only thing keeping him from fucking me was the thin barrier of our jeans. I spiraled higher, and my pussy clenched, desperate to have him inside me.
He pulled his lips away from mine, and my vision whited out. My clit pulsed faster and faster, and I accidentally banged the back of my head against the hard concrete wall as every muscle in my body tensed.
I shook from the intensity of my climax, my teeth grinding together. He leaned in and kissed me, claiming my mouth with his tongue again. Then he broke our kiss and whispered, “You are mine, Ash. Don’t doubt for a second that I will own you. All of you.”
I quivered, my lips parting, ready for more. I felt like we were frozen in time, and I would have spent forever there, memorizing his face.

http://loritoland.com/
http://loritoland.livejournal.com/
Thank you so much for taking time to chat with us today Lori. It's been a wonderful pleasure and I can't wait to read your book :). 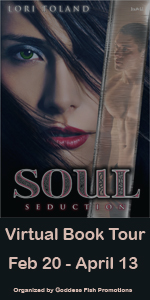 A great interview thank you & I do love cute one-liners.

Thank you for hosting Lori today!

What a great cover. I love it.

Terry...A British watcher, ooops-Mentor--of a slayer and who used to be a librarian. This sounds kind of "Buffy"-ish. How do the stories differ? I'm a big Buffy fan and like the whole Slayer idea.

I loved your description of Terrance, Ashlee's handler. So he was a former librarian now asex toy shop owner! You really have to watch those quiet librarian types! I'm a big Buffy fan too. In fact, I re-watching the series on Netflix right now.

You are a CEO and a writter, wow!
The book sounds familiar somehow...

Is Terry's partner a man? Since you mentioned the m/m romance being the next one...