GFP Book Tour: At the Round Table & Giveaway - Ricochet by Sandra Sookoo 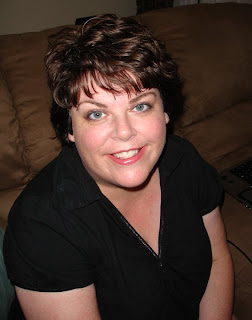 Sandra is a writer of romantic fiction. Her portfolio includes historical, contemporary, sci-fi and paranormal romances in full-length books as well as shorts and novellas. No matter if the heat level is spicy or sweet, she loves to blend genres and often times will add humor.
When not immersed in creating new worlds and interesting characters, Sandra likes to read, bake and travel. Her favorite place to spend vacation hours is Walt Disney World. It’s where dreams come true and the soul can play. If she’s not writing, she’s keeping things interesting at her Believing is Seeing blog or spending time with her husband, who patiently answers questions she has about men and/or sci-fi-related subjects.
You can write to Sandra at sandrasookoo@yahoo.com, visit her website at www.sandrasookoo.com or look her up on Facebook and Twitter. All links are provided on the front page of her website.
Website: http://www.sandrasookoo.com
Believing is Seeing blog: http://sandrasookoo.wordpress.com/
Twitter: http://twitter.com/sandrasookoo
Facebook: http://www.facebook.com/sandra.sookoo
Welcome to Immortality and Beyond Sandra! I have to say that I absolutely LOVE  the cover of Ricochet! I can't wait to read it!
Thanks for hosting this stop on the blog tour!
BK:  Please tell us a little bit about your current release...
It’s a sci-fi romance called Ricochet.  It’s a fast-paced gallop through a make believe galaxy where the hero and heroine are doing a space rally.  She wants to win but he’s only competing to chase down a target—he’s a bounty hunter.  Trouble is, they both have huge egos which clash all the time.
BK:  What inspired this particular novel/book?
Well, in the last two years, I’ve found I really like writing sci-fi stories.  The idea was inspired by a failed antho idea, and since the story had become way too long to include anyway, I just kept writing.  I loved exploring Stratton and Willa’s characters in this book.  They’re so plucky and kick-ass.
BK:  When did you first realize you wanted to be a writer?
As soon as I realized I could make up my own worlds and stories then put them on paper.  I’ve always been an avid reader, so it was only natural.  I wrote my first story about all the kids in the neighborhood.  Since then, it’s literally been burned, since it was so terribly bad.
BK:  How do you keep your writing different from all the others that write in this particular genre?
I like to think I put my own stamp on it.  There are always threads of humor in my stories and there’s always emotion as well.  I’ve been known to make a person cry a time or two.
BK:  What was the hardest thing about writing this story?
When the inevitable “dark” moment came up, there was a part of me that contemplated breaking the hero and heroine up for good.  The events leading up to it were fraught with tension, and when that bad scene ran its course, I was exhausted, just as the characters were exhausted.  I really felt bad for these folks!
BK:  What character was your favorite to write for in this story? Why?
LOL oh, I can’t answer that.  Both Willa and Sin leap off the page and demand equal amounts of attention.  It’s hard to choose, and they’d probably shoot me if I did!
BK:  Which was your favorite scene to write?
There’s a particular scene where the two are in a land rover, racing across the desert.  The way Willa urges Stratton on very much mirrors the act of sex.  Poor Sin has a hard time of it.
BK:  Will this become a series? If so, what inspired it to be a series?
Nope.  It’s a stand-alone.
BK:  Now for a little fun, and into your everyday life, What is a day in your life like?
LOL Um, about as far from exciting as you can possibly get!  I do errands in the morning or maybe some housecleaning and laundry, then I buckle down to write.
BK:  What do you like to do when you're not writing?
Read, bake, cook, devour cookbooks, talk about Disney.  I hang around Disney forums a lot.  Can’t be away from the Mouse!
BK:  What is one thing your readers would be most surprised to learn about you?
I’m not a big fan of dogs or scary movies.
BK:  What do you like to read? Who is your favorite author?
I love reading cozy mysteries.  My favorite authors in that genre are Laura Childs, Kate Collins and Donna Andrews.
BK:  Please tell us one piece of advice you were given as an author that you carry with you when you write?
Never let anyone tell you that you can’t do something.  If you want to, go for it.
BK:  What is one piece of advice you can give to aspiring writers/authors?
Don’t ever give up.  As Dory from Finding Nemo says “Just keep swimming.”  It only takes one “yes” to get a contract, and during those down moments when you just want to throw in the towel, the next moment after that is the winning one.
BK:  What are you currently working on?
At the time of filling out this interview, I’m working on a contemporary novella, also my 4th re-imagined fairy tale, plus another full length action-packed sci-fi romance.  It’s a little busy here right now!
BK:  Again readers can connect with Sandra here....
Website:  http://www.sandrasookoo.com
Believing is Seeing blog:  http://sandrasookoo.wordpress.com/
Twitter:  http://twitter.com/sandrasookoo
Facebook:  http://www.facebook.com/sandra.sookoo 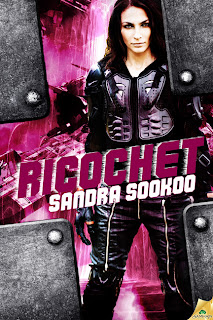 Willa Rayes, only daughter of a legendary Lingorian fighter pilot, can fly any ship in the galaxy. Better than her brothers, in fact. But does that get her any respect? Not as long as she has breasts. Winning the Nebulon Trike will not only force her family to notice her, it’ll be her declaration of independence from men in general.
Then she meets her race partner, Stratton Sinnet. Arrogant and chauvinistic, he ignites her libido like no man ever before. And threatens to send her well-planned strategy straight to hell.
A bounty hunter by trade, Sin enters the Trike for one reason: money. Somewhere among the racers his quarry is hiding, but he’s not worried. He always gets his man, and winning the race will be a nice bonus. It sure would be a hell of a lot easier, though, if he wasn’t saddled with a know-it-all navigator who’s getting on his last nerve—and under his skin.
As the checkpoints go by and the danger escalates, the fight for control, the lead—and satisfaction—approaches supernova heat. Burning away their resistance, and the tough shells that protect their one vulnerability…their hearts.
Excerpt:
She took a deep breath, and the smile flickered again. Beneath the sweat and nerves of the crowd, the sharp scent of rocket fuel permeated the air. It blended with mechanics’ grease and heated electrical wiring and the organic smell of brand-new leather upholstery, topped off by paint fumes. The ships that would be employed during the race were housed not fifty yards away, and her fingers itched to familiarize herself with the steering mechanisms and instrument panels of the one that would be hers to command during the race.
This was where she felt most comfortable; this was where home would always be, here amidst spacecraft of every shape and size. Being one with her ship, accepting no excuses, executing each command with inherent confidence, always in control with no margin for error. It was the best feeling in the world.
Excitement shot through Willa’s stomach as she craned her neck in an attempt to see above the heads and shoulders of the beings clustered in front of her. Being five and a half feet tall in a galaxy populated with much taller beings might have put her at a disadvantage. However, she played her height challenge well; it made her faster and able to squeeze into some ships the others couldn’t hope to fit into. Unfortunately, the lack of height meant the extra inches filled out her breasts and hips, making her a universal object of male appreciation.
Not that she cared. She wasn’t here for a hookup. She was here to crush egos.

Giveaway:
Sandra will be giving one randomly drawn commenter from her tour a gift bag full of travel sized Bath & Body Works in Charmed Scent - so be sure to leave a comment and your email address to enter!
(Open to US/Canada Only)
Follow Sandra's Tour HERE for more chances to win!
Sandra, thank you so much for taking time to chat with me today. I already bought your book and it's waiting for me on my Kindle :). I wish you much success in the future! 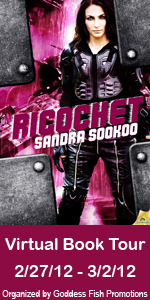 Thank you for hosting Sandra today.

Thanks for hosting me :-)

I am really story to see your tour end. I have enjoyed following you very much. I am looking forward to reading this story.

It's been a quick week! It's been nice to learn more about Ricochet and you. I'm glad it's a stand alone book. It seems like the trend right now is series and I have a little difficulty with that...I don't always have the time to invest in series.

I'll have to check out your blog, Believing Is Seeing.

Best of luck with the book!

Thanks MomJane :-) I hope you enjoy Ricochet!

Thanks Catherine :-) Yup, it's a stand alone. Sometimes, I just really enjoy reading a story and leaving it at that lol Look forward to seeing you at my blog :-)

Hi Sandra. Following your blog tour. Waving. I have really enjoyed learning about your newest book.
Sue B
katsrus(at)gmail(dot)com

Thanks all for coming out!

Nice interview! I love that you feel the emotions your characters do and feel like you suffer right along with them. The books sounds great. Thanks for offering the giveaway!!