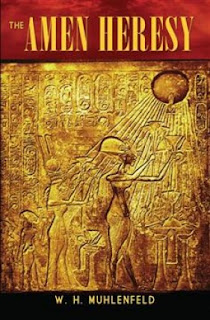 Ex-priest and dyslexic expert of ancient languages, Jack Fisher, agrees to assist an Israeli friend and expert of religious history and is drawn into an unsolved mystery of the Dead Sea Scrolls. His discovery of the true meaning of the Copper Scroll threatens to expose the three religions of Abraham as the monotheistic legacy of an ancient, sun-worshipping pharaoh, Amen-hotep IV. Jack joins forces with Agent Ariel Hadar of the Israeli Antiquities Authority and Sami Salaa, a Palestinian boy of the streets, in an epic struggle for possession of the scroll, and an explosive truth which will upend religious history and shatter the religious legacy of Jews, Christians and Muslims.

Today I welcome Jim Woods as he posts a guest review for The Amen Heresy.  Thank you for sharing your thoughts with us today Jim,  it's a pleasure having you here.  We are also giving away a print copy,  gently used and signed by the author of The Amen Heresy. Open to the US and Canada Only.


Chapter 1 of The Amen Heresy is more prologue and back-story than story continuity. It’s a bit difficult to absorb because of the personal and locale names of the early Christian period. The author may have recognized this when he described his own character’s difficulties in translating and transcribing ancient scrolls from Aramic to Greek. Chapter 2 begins the modern times of the tale; two millennia later than the opening. Chapter 73 is the Montana denouement of an excellent story that encompasses Israel and Egypt, geographically, and thought-provoking holy and unholy ties binding Judaism, Islam and Christianity.
In between, and not at all surprising since religion is the driver of such, faith based hate, destruction and murder are the unwelcome companions to an unlikely alliance composed of a stalwart former priest, an American; a female antiquities protective agent, an Israeli; and the Palestinian boy of the Jerusalem streets.
The prize for their quest is a missing Dead Sea Scroll that if published could have believers questioning their faith and agnostics becoming believers. Such a powerful document, especially when augmented with its reputed treasure map, brings out the worst in several malevolent organizations, all fronted by the facade of service to the Lord, however such is identified in their beliefs, as well as an array of self-serving and malicious individuals concerned only with money and power.
The multiple antagonists steal, plot, scheme and kill to serve their ends, while the trio of protagonists steal, plot, scheme and kill to thwart them. The Amen Heresy is a complex, intriguing, rousing, thoughtful, compassionate and sometimes romantic adventure to not be missed, but only if you’re a world traveler, a historian, a philosopher, a teacher, a student, a scholar, religious, non-religious, or simply a bystander to the world.
Jim Woods, author and editor: http://users.dakotacom.net/~jwoods
Gunshot Echoes, a collection
Assassination Safari, a novel
Parting Shot, a memoir
She Serpent, a novella
The Diamond Exchange, a novella
Cabbages and Kings, a collection
So You Want To Be An Author, a tutorial

I too have read this book and if you would like to see what I thought,  check it out at BWB Reviews.  If you would like to win this signed,  gently used print copy,  please leave a comment with your email address.  It's not necessary to follow the blog,  but always greatly appreciated :).  Contest ends April 17,  winner will be announced April 18 using Random.org.  Open to the US and Canada only.
Until next time,

I'd love a chance to read this book!

Not a lot of entries.

im gonna enter cus i have a US address it can go to first.

this book sounds amazing so please enter me :)