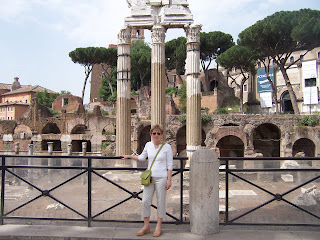 Cara Marsi is a former corporate drone and cubicle dweller who left the corporate world to write the stories that feed her romantic soul. She craves books with happy endings and loves to write about strong heroes and the feisty and equally strong heroines they love.

She credits her love of romance to the old Thirties and Forties romantic comedies she watched on late night TV growing up. In her teens, she discovered romance novels and decided she wanted to tell her own love stories. Cara is published in romantic suspense with The Wild Rose Press and has also published numerous short romance stories. Cara and her husband enjoy traveling and she loves to write about the places they've visited. They share their house with a fat black cat named Killer. 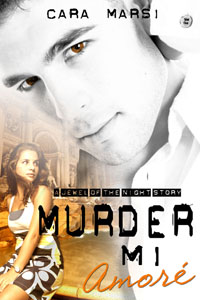 MURDER, MI AMORE'
ITALY
DANGER
SEX
AND A SWEET GIRL CAUGHT IN THE CROSSFIRE
What if someone you loved and planned to marry betrayed you? To heal, and get a little revenge, you sell the jewelry he gave you and treat yourself to a month in Italy. You’ll eat, sightsee, and maybe even have a fling with a sexy Italian guy. But what if jewel thieves, terrorists, and murder intrude on your Roman holiday? And what if you have your fling with a very sexy guy, but that guy isn’t quite what he seems?
This is the premise of my romantic suspense novella set in Italy, Murder, Mi Amore, from The Wild Rose Press. I love Italy. I’ve been there twice, once many years ago with my parents, and the second time in 2006 with my husband. I wanted to write a story set in that beautiful, amazing country. When The Wild Rose Press announced a new series of romantic suspense stories that could be set anywhere in the world, but had to involve a blue diamond, I had my Italy story.
I love tales about innocent, ordinary people caught in extraordinary, even dangerous, circumstances. And my heroine, Lexie Cortese, finds herself in a world of danger.
Here’s the blurb for Murder, Mi Amore':


Lexie Cortese is in Rome to forget. The last thing she expects is to meet a sexy Interpol agent who suspects her of being part of a terrorist plot involving a stolen diamond. Suddenly thrust into a world of murders, muggings, and kidnappings, Lexie doesn’t know what to think—or who to believe.
Dominic Brioni’s assignment is simple. Befriend the American and bring her to justice. Only Lexie seems the most unlikely terrorist Dominic has ever met. Sweet, determined, and direct, she faces life with courage and fire, a fire that sparks his protective instincts and a longing for something more—something he allowed himself to hope for only once before.
But that woman betrayed him, and his boss isn’t about to let him forget it. With his career on the line and Lexie in danger, will Dominic learn to trust his heart before they both get killed?
We all know Italy is filled with art, history, great food, and stylish men and women. But every city and country has an underbelly. I used my imagination to interject this dark side onto the touristy Italy I visited. All four of my grandparents came from Italy, from the province of Abruzzo. So I have more than a passing interest in the country.
Writing Murder Mi Amore allowed me to relive our trip. I pictured the places we’d seen, then imagined putting Lexie into danger in those very places.
As I wrote about Lexie and Dominic meeting for the first time at Trevi Fountain, I could hear the chattering of the crowds and the snap of cameras and feel the sun’s heat. I could almost taste the wine Lexie orders. But underneath this holiday atmosphere is the constant threat of crime. Rome teems with pickpockets. During our trip, when my husband set his digital camera on our table near Trevi, our waiter told him to put the camera away as thieves like to run by and snatch valuables off the tables. I used this idea when Lexie’s new designer handbag is stolen - the handbag that starts her spiral of murder and mayhem.
Every location in Murder, Mi Amore is authentic. When Lexie is dragged through dark and narrow streets by her would-be kidnapper, I pictured the little alleyways dotting Rome. Like mosquitoes, motor scooters swarm through the city, sometimes even on sidewalks. Dominic is almost run over by a scooter when he and Lexie are attacked by a mugger (or so they think he’s a mugger). No one is my story is exactly what he seems.
I even have a chapter set in my grandparents’ hometown of Ripa Teatina. On our trip we traveled the same mountainous road between Rome and Abruzzo that Lexie and Dominic traverse. Only we weren’t chased by someone trying to kill us.
Lexie’s decisions - to travel to Italy alone, to buy a way-too-expensive handbag - have consequences. Determined to change her ways from a woman who does what others expect to a woman who does what she wants, Lexie is thrust into a dark world she could only imagine. Instead of letting fear rule her, she faces the danger with courage. When the police don’t believe her, she refuses to back down. I loved seeing Lexie grow as the story progressed.
Having raised his younger sister, Dominic is protective of women. Although his job for Interpol is to bring Lexie to justice for her alleged involvement with terrorists, she appeals to his protective instincts. Lexie isn’t afraid to fight her own battles, but Dominic is by her side, fighting with her. She knows he’s hiding something, but finally decides to trust him. On the morning they trust each other enough to make love, Dominic learns some disturbing news about Lexie that makes him question everything he feels for her.
I loved writing Murder, Mi Amore. I liked writing the villains too, and they are some very bad guys. Think of all the Mafia movies you’ve seen. I loved putting Lexie and Dominic in danger, in Italy and again in Las Vegas.
Dominic is a warrior, but so is Lexie. Together they’re formidable. I hope my readers think so too.
BK, thank you for having me as your guest today. If any of your readers have questions, I’ll be glad to answer them.
You can visit me at www.caramarsi.com
Buy links: http://www.amazon.com/Murder-Amore-Jewels-Night-ebook/dp/B004GEAZWY
http://www.thewildrosepress.com/murder-mi-amore-p-4345.html
Facebook: www.facebook.com/carolynmatkowsky
Twitter: http://twitter.com/caramarsi
Watch the video for “Murder, Mi Amore:”
Thank you so much for stopping in today Cara.  It's been a pleasure having you.  I wish you much success in the future.
Until next time,

BK, thank you for having me today. I love talking about Italy and Murder, Mi Amore. I hope others enjoy it too.

Hi Cara, I went to Italy several times and visited the Trevi Fountain two years ago. I had a delicious ice cream called Cassata Napolitana while watching the hustele and bustle at the fountain. Like everyone around me I threw a coin in the fountain to make sure I will be back. I can't wait to read your book.

I've never been to Italy, the home of my grandfather.
But, I'm hoping your story will take me there for awhile! I still have relatives there I will never meet. This must TBR is now on my list!
Good Luck Cara!!!!

Thank you, Mona and Mary. Mona, I love gelato. My favorite was kiwi melon. Mary, I hope my book takes you to Italy, even for a little while.

Cara, I love your books. Murder Mi Amore is great, and I really enjoyed seeing Italy through the eyes of your characters.

I visited Italy also and enjoyed it as well. I love that you use real life experiences and are true to the scenery. That makes me want to read your book now.
Patti

Thank you all for stopping in. I someday wish to go to Italy and am very anxious to read Murder Mi Amore' :).

I'm a huge fan of Cara's! This book, Murder Mi Amore, has rich descriptions (you feel like you've been to Italy after reading it) and wonderful characters!

Lexi is a fabulous heroine, and since I've dreamed of visiting Italy myself, I loved this story. Cara, as always, your plot and characters pulled me right in. Great job!

I had so much fun in Italy last year. It was as hot as Texas, too!

I found gloves and handbags.

And I love it when *something* catches us and goes cha-ching! Then a story unfolds.

Hi Cara, I love Italy as well. My family is Scilian so I've been there as well. I've been twice and both times I threw my coin in the Trevi Fountain so I know I'll go again. Soon I hope. Your story sounds fun, sexy and dangerous, everything that makes a great read. Good luck and I'll put it on my "to read" list.

I'm so envious of your visit to Italy! I love how you worked the setting into this book, which I also love, BTW!

Ah, Cara, I would love to visit Italy one day and your story sounds brilliant! Best of luck!

Sue, thanks for posting and for the wonderful things you said about Murder, Mi Amore.

Patti, thanks for visiting. Isn't Italy great! I hope I can go back again someday,

Tess and Misty, thanks for posting. I'm thrilled you like Murder, Mi Amore.

Dear Author, thanks for visiting. The year we were in Italy they were having the worst heat wave they'd had in decades. And as much as I love the country and the people, they don't really understand air conditioning.

Hi, Debbie, thanks for posting. Nice to know another writer of Italian descent. I put my coins in Trevi on both visits. It worked the first time and I came back. Hope it works again.

Ari and Diana, thanks for posting. I hope you can visit Italy someday. It's amazing.

And BK, thank you for having me and allowing me to talk about Murder, Mi Amore.