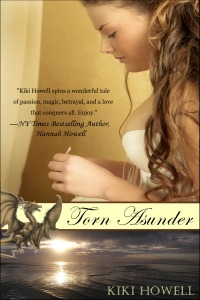 Aubrey Griffen is a witch whose true reasons for coming to London soon fall to the wayside when she catches the eye of Edmund Bryant, the Marquess of Dalysbury. He seduces her into a whirlwind romance until the lies and threats of his mother force her to flee to Triaill Brimuir, a secret island of her ancestors off the coast of Ireland. Edmund goes after her only to be hit by Aubrey's confusion and anger when she magically transforms him into an elemental beast of her own creation. However, it is when Edmund's lust mysteriously turns him back into a man that the couple are forced to deal with a family secret and untold of powers. Now, Edmund must learn to shift himself into the beast in order to save her in a battle of black verses white magic. Fraught with scenes of explicit intimacy, romantic spells and mystical shapeshifting, Torn Asunder is a unique blending of the age of manners with sexual magic.

I was so excited to read this novel.  I was first introduced to Kiki's writing with The Sorcerer's Song,  which I absolutely loved,  and she brought the same brilliance to her first full length novel in Torn Asunder.

Aubrey Griffen was sent to live with her cousins,  Lord and Lady Sanderly,  to learn her magic.  When she meets Edmund Bryant,  the Marquess of Dalysbury,  a love blooms beyond anyone's belief.  Edmund's mother has other intentions for him though,  arranging for him to marry The Lady Elizabeth Ward,  daughter of the Duke.

Edmund continually defies his mother's wishes and sneaks off to secretly be with his true love.  It is when his mother threatens Aubrey,  forcing her to leave London to give Edmund the chance to marry who is best suited for his social status,  that Edmund realizes he cannot live without her.  Giving her money and the threat to expose her family for what they are,  witches,  Aubrey agrees and flees to the island Triaill Brimuir,  a place her ancestors once inhabited.

Edmund leaves in search for his love,  finding his way to the island.  Out of fear for her family,  Aubrey uses her magic to transform Edmund into a beast,  willing him to return to his homeland with no success.  To both of their surprise,  Edmund carries a secret of his own.  Fearful and angry,  Aubrey tries to ignore the love that her and Edmund share,  feeling that Edmund purposefully kept this information from her.  Only after much plea and convincing,  does she return to London to face Edmund's mother.

Learning of his true Father,  the plot only thickens as Edmund fights to save his true love from the man he never knew,  and figure out who he truly is.  Will white magic and true love be enough to conquer the dark forces that so blatantly try to tear them apart?

I was so blown away at Howell's imagination.  I was drawn into this novel from the first chapter,  and as I neared the end the action picked up so much,   forcing me to read it until I knew what the outcome would be. I greatly enjoyed this read and would recommend this to anyone that loves a good romance with a fantasy twist.  If it weren't for the steamy sex scenes,  I would even recommend this to a younger audience.  It's that great that anyone would enjoy it,  but because of the sex,  it must be for 18 and above.

If you would like to learn more about Kiki Howell and her other books,  please visit her online at http://www.kikihowell.com 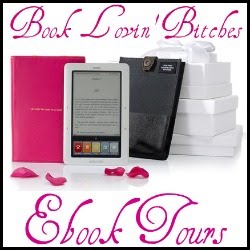 Disclosure of Material Connection: i am a member of the Book Lovin' Bitches Ebook Tours and a copy was provided to me by the author. although payment may have been received by Book Lovin' Bitches Ebook Tours, no payment was received by me in exchange for this review nor was there an obligation to write a positive one. all opinions expressed here are entirely mine and may not necessarily agree with those of the author, the book's publisher and publicist or the readers of this review. this disclosure is in accordance with the Federal Trade Commission's 16 CFR, Part 255, Guides Concerning the Use of Endorsements and Testimonials in Advertising.
Posted by Nightly Cafe at 12:42 PM

Nicely written review. Kiki's novel sounds very intriguing so it's going on my To Be Read list today.

Thanks for stopping in Lee. It was a fantastic read you will enjoy it :).

Great review - definitely need to ad to my TBR!

Trying to build up my followers/readership.
Would love a follow back - new adult-oriented blog: http://faeroticprose.blogspot.com

Would love any help/referrals for new followers to my blog - thanks in advance!

Thanks for the wonderful review! :)

Faerotic Me - thank you for stopping in. You will love the book.