***** I Thought We Were Friends by Tina deCoux 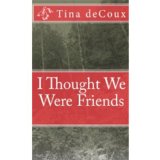 I Thought We Were Friends by Tina deCoux was fantastic!  From the first word I couldn't put this book down until I was to the end.

Chris Borstad was a young shipping department manager for a home improvement warehouse.  She loved her job,  was respected by her crew, and loved to prove that a woman can do the job just as good if not better than a man.

Chris also had a secret - her live-in boyfriend of two and a half years is also her boss.  Nobody can know about this relationship as Bob,  her boss could very well lose his job.

When Chris is demoted unexpectedly to save money within the company,  she is angry with Bob for not sharing this with her beforehand,  and angry at Len,  the big boss for doing this to her.  Not only is she being demoted,  but she must train the new guy coming to take her place.

She goes home that night to find herself alone and wallowing in self pity.  When Bob finally decides to come home,  Chris knows something's not right.  Eventually he admits that he is leaving her for another woman.  Devestated,  Chris tries to pull her life together to make the best of it.

When she is forced to train a new receiving clerk too,  her life starts to spin out of control as the new clerk,  Shannon becomes obsessed with Chris.  In Shannon's mind her and Chris are the best of friends,  even though Shannon gives Chris the creeps.  There is more to Shannon that meets the eye and Chris is about to find out more than she would ever want to know.

This starts the scene for a fast paced thriller,  full of unexpected events and suspense, and you don't know who is telling the truth and who is out to get Chris.

deCoux did a magnificent job from the get go.  I love her writing style and the characters are so easy to love and hate.  I Thought We Were Friends is the first book in a Thriller Trilogy and will pull you in leaving you wanting more.