**** Review of The Crimson Knights by James Watts 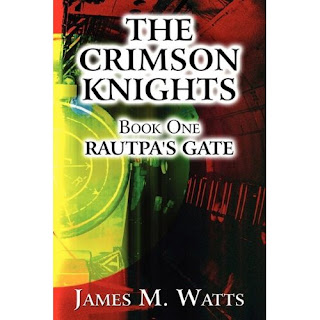 The Crimson Knights
Book One
Rautpa’s Gate
By: James M. Watts
A very long time ago...on the planet Tempurr, the occupants of the two largest landmasses, the Galilans and the Numarians, have been at war. In order for the war to continue, four disks on a ship is crashed to Earth, in hopes to be later found and continue the war in hopes of domination.
Fast forward to present day and Marcus Silver CEO of Chemtech has possession of the four plates. A researcher for Chemtech, Blake Edwards, and finds out Silver has the plates and has Silver’s assistant Marcy Sanders use her exclusive access to acquire the plates. She does acquire them and she is then a target for the Reapers (renegade Galilans) who want the plates to enter Rumok’s temple and open Rautpa’s gate.
Bring in the Crimson Knights, who to keep the original Crimson Knights’ (Numarian soldiers) legacy, want the plates to protect Rautpa’s gate from being opened. There are actually 10 plates needed all together to open the gate. The other six plates are Hossair’s keys remain in the temple guarded by the Crimson Knights.
The history of the Crimson Knights and the Crimson Light is not exactly known and is mysterious. Rautpa is the guardian of the Crimson light that powers the Crimson Knights. One belief is that after an epic battle between Rautpa and Hossair, Rautpa slays Hossair, took Hossair’s place and made the six Knights his protectors. The other belief is Rautpa upset Hossair and Hossair sent Rautpa to serve eternity in Rumok’s temple as the servant of Crimson Light. Hossair gave the Knights’ their Light to ensure that the Rautpa is kept sealed.
Throughout series of action packed events, the Knights are forced to fight against Silver and Chemtech and Reapers and at the end of fighting a turn of events sets up the next book.
This is an action packed read. I love the original characters the Crimson Knights and all of their awesome powers and just for lack of a better word coolness. Great descriptions and a great fight sequences. I also truly enjoyed the honest language and dialogue. I found myself chuckling out loud on many of the one-liners. The other characters are original as well. A glossary of names and terms is also included to help keep everything straight! There are a lot of characters and sequences, I did have to go back and re-read to be sure that I understood everything. But, I am definitely looking forward to the next book!
**** 4 stars. Jennifer L. Bonges