I didn’t know until recently after talking to one of my best friends who is a psychic, she told me what I actually was, a ghost magnet. As far back as I can remember I could sense or see ghosts. The very first time I sensed a ghost I was two. The ghost just so happened to push me down the stairs. I didn’t get hurt but I do remember it.
When I became a teenager I started to see this figure outlined in gold. The first time I saw it I was standing next to my mom’s kitchen stove. As I got older the gold figure never left. I would see it in different rooms. The next type of ghost I saw was what is called shadow people.
Totally different are the shadow people to the gold figure. I have always felt negativity from the shadow people. I started seeing ghosts and found out that it wasn’t what most people called normal. I even went through period when it freaked me out. Most of that was due to my family, which I no longer have any contact with.
Today I embrace my ability to see ghosts but it also goes along with my being a witch. The most recent ghost sighting that totally freaked me out was seeing a ghost in the church next door. It was a gentleman that looked as solid as I was but he was pale. For about month I could see a him in the window staring at me. It was a little unnerving but then one day he was gone.
Wickedly yours,
L. A.
Find L.A. Here:
http://www.laburton.org/
http://laburton.livejournal.com/
Facebook
Twitter 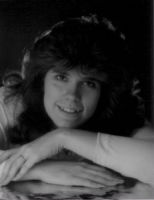 LA wasn’t your normal child. She's dreamed of vampires and werewolves ever since she was a little girl. The only weird thing is - they didn’t scare her. Her looks were deceiving. People think she's nice and unassuming, but underneath she was always dark and twisted, with pink around the edges. Nothing has changed...

All grown up now, L.A. can be found researching and writing her novels. In her spare time she's writing spells, reading tarot cards, and practicing witchcraft. L.A. lives in Ohio with her family, cat (Crysie), the ghost of her late cat (Cougar) and a Jack Russell Terrier (Piper), which keeps her busy. 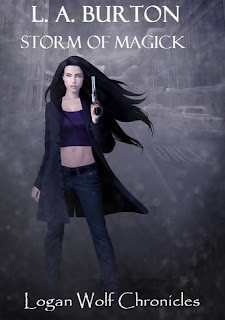 Logan Wolf is a ghost-hunting witch who helps Little Rock's Special Unit on supernatural and occult crimes. When she's called in to investigate a scene that seems strangely familiar, she finds herself in a race against time to capture a killer with paranormal power and evil origins.

To make matters worse, Logan and her friends are battling Palmira, an insane werefox queen who's taking advantage of the murders to further her own plans for power. When Logan's twin brother is pulled into the fight with Palmira, Logan must unleash the full force of her unruly magick to save him, and all of Little Rock. Even if it means incurring the wrath of the feared Elders' Council along the way...


Thank you so much for sharing this with us today L.A.  My first thought was from the movie,  6th Sense,  hence the title of this post :).  Having this capability can be unnerving and especially at such a young age.   I am looking forward to reading your book and wish you much success in the future.