At The Round Table & Giveaway with Denise Verrico - My Fearful Symmetry

Denise Verrico
Welcome back Denise. It's such a pleasure and I'm so excited for your new release, Fearful Symmetry. May I offer you a beverage?
DV: Can I say Mesmerizing Merlot?
Of course, coming right up. 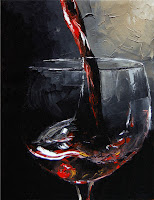 Thank you so much for taking time to chat with me today. It's so nice to have you at the Round Table.

BK: Please tell us a bit about yourself....
I’m a bit off kilter really. No sane person would write the stuff I write. I’ve always seen the world a little bit differently. As a child, I played with Barbies like other little girls, but mine were engaged in court dramas about the Tudors. There was the odd beheading. I loved the TV show Dark Shadows and watching horror movies from a very young age. I suppose I have a sense of the macabre. However, I like to laugh. My skewered view of the world manifests in my sense of humor. I adore Eddie Izzard.


BK: What inspired you to pen this novel?
Cedric MacKinnon was just one of those characters whose story begged to be told. He becomes a pivotal character in the series. His actions have a great impact on Mia and Kurt’s fate in Book Four, Ratopia.
I’d originally conceived of Cedric as a love interest for a character in a future book, but his backstory was so interesting that it really called for its own book. I’d come up with the Indian origin for the Immortyl culture and the idea of the adepts of the ancient arts (Immortyl courtesans and performing artists) earlier on, but I hadn’t yet created the mythology for them. Cedric Is a musician, singer and dancer.
The Immortyls practice a form of Tantra, which centers on Shakti (mother goddess or female principle) worship. Then in my research I came across the history of the devidasi, female temple artists who were sometimes exploited as courtesans. History gives several examples of sacred courtesans. Since my Immortyls are of a more omnivorous sexuality, it made sense that some of their courtesans would be male. (One of my favorite historical fiction novels is Mary Renault’s The Persian Boy, about Bogoas, who was a companion to Alexander the Great.) So, I did more research and found precedent for male courtesans in ancient times. In India there are even examples of a recognized third sex. But don’t worry, Cedric is all boy. He just likes men and women both. And what does Cedric do? He falls for a woman who is forbidden to him.
The title comes from the William Blake poem, Tyger, Tyger. The tiger is used as a symbolic element in this story as well. The chief elder gives Cedric the name Shardul, which comes from Sanskrit and means tiger. Cedric likens his condition to the chief elder’s pet tigers that restlessly pace inside the walls of the compound, looking for a chance at freedom. He’s both beautiful and dangerous.

BK: What draws you to write in this genre?
My love of all things dark and spooky.
BK: How do you keep your writing different from all the other novels in this genre?
I always keep the word “fantasy” in mind and then add a dollop of sci fi. I suppose it’s my world-building that’s most different. I try not to imitate other books or rely on the Slavic vampire myths. I draw on my love of historical fiction to create a very real place for my vampires to dwell.
BK: Who is your favorite character and why?
Gosh, that would be Kurt Eisen. He’s so decent at heart, but he’s one tough little bastard when he must be. There are so many complexities and levels to this man.
BK: Which character would you most invite to dinner?
That’s easy. It would be Cedric, the hero of My Fearful Symmetry. He’s the most charming and talented. He can croon a tune with the best of them and he plays a mean guitar. Also, he’s got a wicked sense of humor.
BK: What is your favorite part about writing?
The business side of it takes up too much time. I wish I could just constantly create.
BK: Did you find any particular challenges during the writing of this novel?
Well, I was writing from a teenaged male’s POV, and even though I’m quite the tomboy at heart, I’m still a middle-aged woman. Also, Cedric is from the UK (Scotland and later London). I had to capture a rhythm to his speech and research teenage slang. I don’t ever write in dialect, but I wanted him to have a certain authenticity. I had a British beta reader help me out here. Also, I watched lots and lots of the British TV series Skins. (Okay, maybe that was because of Nicholas Hoult.) The setting in India, but outside of the “real world”. I did a lot of research on art, religions, customs etc. to create Cedric’s world inside of the chief elder’s compound, but it’s in no way meant to depict life in modern India. There are a couple of scenes in Kolkata that required extra research.
BK: Did you learn anything about yourself as a result of writing this novel?
I want to write a historical fantasy.
BK: Are you currently working on any projects?
Yes, book four Ratopia is nearly done. I’m also working on another urban fantasy novel and kicking around a historical fantasy.
BK: Any advice for new aspiring authors?
Read, read, read! Learn all you can about every subject.
BK: Where can readers find you? (Facebook, twitter, website, blog, etc.)
www.deniseverricowriter.webs.com
www.Immortylrevolution.blogspot.com
My Facebook page is:
http://www.facebook.com/pages/Immortyl-Revolution-Fans-of-Denise-Verrico-author/290431344200?ref=ts\
My blog feeds to Amazon, Goodreads and Booktown.


BK: What inspired your book to be a series?
Kurt wanted to fight a revolution.
BK: How difficult is it to write a series?
It’s always difficult figuring out how much info about the previous book you need to give new readers.


BK:: What is your favorite part about writing?
Creating characters and world building.


BK: Do you have a favorite book in the series?
This one, My Fearful Symmetry.


BK: What do you like to read when you're not writing?
Right now, it’s George R. R. Martin’s song of Fire and Ice.


BK: Do you have a favorite author/book?
I love Mary Renault and Robert Graves.


BK: What is one thing your readers would be most surprised to know about you?
I get sick at the sight of blood.


BK: What do you like to do for fun?
Ride roller coasters--the bigger, the faster, the better.


BK: What is your favorite food and restaurant?
I love Chinese food. My favorite restaurant though is an Italian one in New York and it is actually called, Cara Mia


BK: Do you have any special announcements or events you would like to share with readers today?
I’m doing a giveaway this month on my blog for a copy of My Fearful Symmetry. Next month, I’m having a book launch event at my blog to lead into my party at Fandom Fest in Lexington, KY.
BK: If you could possess a supernatural power, what would it be and why?
I wish I could time travel because I don’t have enough hours in the day!
Thank you so much for being at the Round Table today. It's been such a pleasure chatting with you and I wish you much success in the future.


I’m giving away a My Fearful Symmetry pen to one commenter here. To enter to win an author-signed copy of My Fearful Symmetry, go to my blog and comment on any of my June postings:
www.Immortylrevolution.blogspot.com.
You get one entry per each comment. The drawing will be held on June 30th at 11:59 PM EDT. 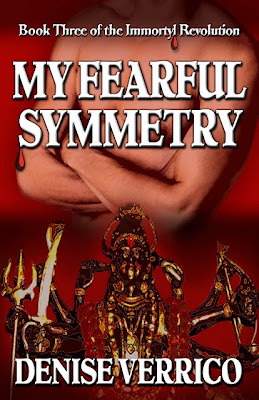 A boy becomes a vampire and fights to become a man.Only the most gifted and beautiful Immortyls are chosen to serve Mother Kali as adepts of the ancient arts . . . For nineteen-year-old Cedric MacKinnon, the promise of eternal youth and celebrity sounds like a dream come true. It becomes a nightmare when a master vampire plucks the boy from the London streets and spirits him away to India. In the fabled ashram of the adepts of the ancient arts, Cedric undergoes the grueling process of training as a temple dancer and courtesan. With the threat of revolution hanging over court, the chief elder employs the boy he names Shardul in dangerous games of seduction and intrigue. Hated by the chief's mistress and abused by those he entertains, Cedric struggles with visions of a violent destiny that seem to come from Kali herself. The stakes are heightened when the rebel leader, Loki, is brought to India for trial and Cedric is forced to choose between the protection and patronage of a powerful elder and his love for a beautiful female adept.
Posted by Nightly Cafe at 1:18 AM

Labels: At The Round Table, Denise Verrico

Thanks for having me here today!

Very interesting interview, Denise. I especially enjoyed reading about what inspired you to write the novel.

I found the interview interesting and informative. I've been over to the website and commented on the post entitled: Aleron by Kane

Thanks for the great comments! This novel was a lot of fun to research and write. I'm fascinated by ancient cultures and love reading about history.