VBT Pit Stop - At The Round Table with David F. Porteous 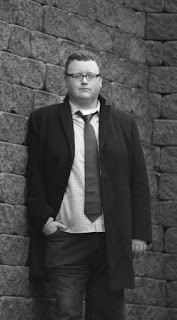 He attended Cockenzie and Port Seton Primary School where he learned to spell and write his name in cursive. The value of these once impressive skills has been substantially undermined by subsequent technological developments.

In 2002 he graduated from Napier University in Edinburgh with a degree in Marketing Management. His honours dissertation asserted that there was a bright future ahead for DVD rental stores. Over time this assertion proved to be both wrong and stupid.

(He is not giving back the degree).

David has been a stand-up comic, poet, voice actor and social research consultant. He stuck with the consulting because it was only thing people paid him for.
Singular is his first novel.

Welcome to the Round Table.  May I offer you a beverage before we begin?

Thanks BK. Well, when I was growing up, a vampire was a respectable gentleman with a widow’s peak and an opera cloak. And if he climbed into a girl’s room in the middle of the night it was because he planned to eat her – and not refuse to have sex with her. So as long as the Vampire’s Wine is of a decent vintage, I’ll have a glass of that please.

Absolutely David. It's of the best vintage. Enjoy! :).

It’s very nice to be here.

BK:  Please tell us a bit about yourself....


By day I’m a social research consultant. By night I use those same skills to fight crime – with limited success. And at the weekends I’m a writer.


I enjoy the music of crusty-voiced old folkster Bob Dylan and the boy band McFly.

BK:  What inspired you to pen this novel?

Cancer. Back in 2009 I was diagnosed with testicular cancer and it was in the same room I was given that news that I started writing Singular. The news clarified for me how short life is and reminded me that writing was what I’d always wanted to do, but somehow hadn’t got around to.


As it turned out, the diagnosis was wrong – though we didn’t find that out until much later. But it was the spur I needed to start myself writing. And however painful the treatment and recovery period was, I would have say I’m grateful for the experience.

BK:  What draws you to write in this genre?


I suppose why I’m interested in writing science fiction and fantasy works is because that’s a lot of what I like to read. But more than this, I hate to be confined by genre – and mainstream fiction is the most restrictive genre of all. As a writer I’d never want to get to a point in the story and say “what this needs is a dragon” but be unable to put one in for the ridiculous reason that dragons aren’t real.

BK:  How do you keep your writing different from all the other novels in this genre?

I think you have to find your voice as a writer and find the themes you’re interested in and then write as well as you can. Never set out to write like someone else or to use someone else’s ideas and you can usually produce something that feels right. I’d say it’s good not to think about it, but reading a number of different writers and genres should stop your style emulating any one.

BK:  What is your favorite part about writing?

I like the moment when you realise you’ve done something right. There aren’t any clicks in writing – nothing ever clicks together. But there are moments when you move slightly, gain a new perspective and you can see how all the pieces of what you’ve made combine. Those moments are worth it – though they don’t always happen when you’re writing – I sometimes find one in the shower or on a train journey; when I’m thinking about writing without putting words down.

BK:  Did you find any particular challenges during the writing of this novel?

In the first draft one of the main characters wasn’t there, I put them and the eight chapters of their experiences into the second draft and it’s a better novel for it.


But I’d say the editing was toughest. The version of Singular you can buy now is, in tech terms, v5.0. When I finished the second draft I thought it was ready, but editing is a discipline in itself; it’s not something that naturally comes with being able to write. It took me another three complete re-workings of the book before I got something I’m content with.

Anybody who has written anything will tell you the same – you never finish, you just release. At the fifth draft I was able to release it to the world.

BK:  Did you learn anything about yourself as a result of writing this novel?

BK:  Are you currently working on any projects?

I’m working on a novel and a collection of short stories. None of them are anything like Singular – most of which was written as a five-person inner monologue. But all of them are exploring different notions of the character voice.


As the novel won’t see the light of day for another year at least, I’m working on the short stories as much to give myself a sense of completion as to help develop interest in my work.

Seek inspiration, don’t wait for it. And when you’ve got some, write.

BK:  Where can readers find you?

The main point of contact would be my website www.dfpiii.com and from there you can find my twitter and the Facebook page for Singular. Actually, at the end of the tour, I’ll be giving one person who “likes” Singular on Facebook a unique prize. It’s the proof copy of the US print edition of Singular, which I’ll sign with a personal message. A one-of-a-kind prize that, one day, may be worth as much as a brand new copy somebody hasn’t written on. 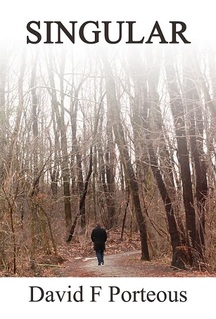 Patrick Clark is a moral philosopher and a terrible human being. After living a selfish, indulgent life, he probably deserves cancer; probably deserves death. But in 2045, living forever in paradise doesn't take faith or good deeds - it just takes money.

In the depths of Singularity a new consciousness has awoken. As it struggles to become free from the immortality machine, its limitless rage threatens the living and the dead alike.

The fates of Patrick and the nameless, faceless machine creature are intertwined with each other and with sinister, utilitarian plans for the future of the nation and humanity.

Singular is a thought-provoking debut novel of dark comedy that asks questions of a nearly possible future.

David is currently on Virtual Book Tour,  you can view all his pit stops by clicking his banner above to go to our Calendar of Events page.  Don't forget to like Singular facebook page for your chance to win a copy of Singular.